It’s been ten years since a young student called Mike, who had an interest in my work and was producing an online magazine on London’s transport, contacted me. He suggested  I should have a website, but I was reluctant. What would I need a website for, I had plenty of business anyway and it would cost. No, he said, he would put all the material on for free as he wanted to test out how to do it.

Reluctantly, I got hold of various old Rail columns, and trawled my documents file for old articles, and came up with a couple of hundred. Mike patiently and laboriously coded them all into the site and it was born. Of course, it has proved invaluable and quickly became a useful resource for thousands of weekly users and, just as important, for me. No longer did I have to get my daughter to stick in all my articles into the ever growing collection of scrapbooks (I think there are 37 on my shelf, which I rarely consult) but instead I could instantly call up my own articles – or send links to people seeking them.

As these screen shots show, the website has been through 5 major incarnations, as well as lots of tinkering in between, and now, with the addition of some of the older blogs left out of the latest generation (which will be imported in the next few days), it will reach more than 1,200 pieces, including nearly 400 Rail columns, and more than 250 blogs. There are articles from more than 75 publications ranging from the Wall Street Journal to the Morning Star, Accountancy to Ethos.

This is, of course, completely separate from the Wolmar for London site, also designed by Mike and his team at Primary Image. It’s been a great collaboration and I wonder what websites will look like in ten years time when I am sure Mike will still be producing them… 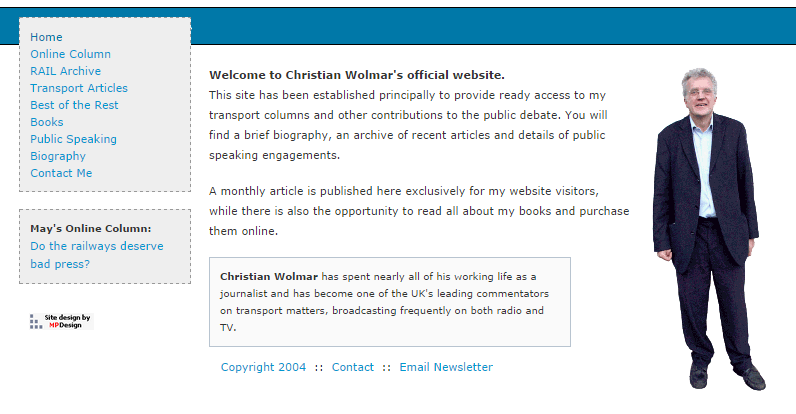 Welcome to my new website and this column which will be a regular monthly feature on it. The website is designed to enable readers to look up past articles I have written, check up on my thoughts on latest transport developments and learn more about my work.

It has been an incredibly busy start to the year. We’ve had the announcement of the rail review, the anniversary of congestion charging, the accident at Tebay, the imminent bankruptcy of Eurotunnel and lots of rumours about government decisions on Crossrail and the Central Railway. Barely a day has passed without an invitation to appear on a TV or radio programme. This is in sharp contrast to this time last year when news about Iraq dominated the political agenda and transport stories did not get a mention.

Just to pick one of these subjects, the announcement of the rail review is a fascinating development. For years ministers have argued that while the structure of the privatised railways was flawed, the ‘transition costs’ of making major changes were not worth it. In other words, it was better to leave well alone because further structural upheavals would be too damaging.

Now this has changed. Despite the timid nature of the actual announcement, there is the possibility of quite radical changes as a result of the review. While attention has focussed on the role of the regulators, according to Whitehall sources, there is no doubt that the review is much more wide ranging than that. And despite the fact that Richard Bowker, the head of the SRA, is one of the postboxes for contributions to the review, his position is by no means secure

The timing of the announcement is worthy of note, too. The review is expected to be published in July, which will be just after the departure of Tom Winsor, the rail regulator, who has already sharply criticised the announcement. With Winsor out of the way, ministers hope that they will be able to rein back on the powers of the regulator.

Nor can the bosses of Network Rail sleep easy. While the nature of the organisation – the much vaunted company limited by guarantee – will be left alone, there is plenty of scope for changes, particularly if ways of cutting back its spending can be found.

With the train operators also in the firing line for requiring extra franchise payments, no one – not even the rolling stock companies – has been left off the list of potential targets. So expect fireworks in the summer.