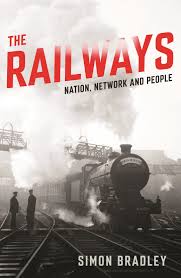 Simon Bradley dates the demise of the on-board meal service to 1962, when Pullman services no longer offered croutons with the soup course. That may be a touch fanciful— there were other reasons for the decline, such as faster trains, cost cutting and the growth of fast food. Nevertheless, it is the type of anecdote that illustrates the thoroughness and depth of Bradley’s research.

It is indisputable that the railways were the most important invention of the early 19th century. Before their creation, travel between towns and cities was a desperately slow and difficult enterprise and moving goods around was even harder, given the terrible state of the roads. Railways were transformational in every sense and their rapid growth — Britain had more than 5,000 miles of railway just 20 years after the opening of the seminal Liverpool & Manchester Railway in 1830 — was testimony to their importance.

Rather than telling this oft-repeated tale chronologically, as most railway histories do, Bradley has taken the brave step of choosing a thematic approach. And it works, thanks to the diligence of his research and the crispness of the writing.

He uses the conceit of a rail journey in 1862 as the basis for his account in an effort to get across what it was like to actually travel on a train in those early days. He details everything, from the development of the system of tickets that prevented fraud by booking office clerks (he explains, too, why they were called ‘booking offices’) and how railways were accessed (stations were something of an afterthought) to how to avoid getting cold (with difficulty, especially in third class) and how to behave in compartments (he muses on whether the English, as opposed to the garrulous Americans, were really as taciturn as suggested in much of the literature).

The etiquette of travelling by train had to be devised partly through company diktat — rules and regulations spread almost as quickly as the iron road itself —and partly through habit. He details, for example, the Old Bailey trial of a railway cleaner accused of stealing the silk handkerchief of a passenger who had used it as a place-marker to reserve his seat, only to find it had disappeared ten minutes later when the train was ready to depart.

More serious crimes occurred on the railways. Sexual assault was a risk, given that carriages consisting of unconnected compartments were the norm until the end of the 19th century. But the railways were a liberating force for women as well as men, enabling them to travel long distances relatively cheaply.

Occasionally even ‘respectable’ men were prosecuted — men such as Colonel Valentine Baker, who indecently assaulted a young lady on a London & South Western train out of Waterloo and was given a year’s imprisonment, which he spent rather comfortably, being allowed to entertain friends between 9 a.m. and 6 p.m. in his rooms at Horsemonger Road gaol. Given the recent debate over women-only carriages, Bradley helpfully informs us that ladies’ compartments, ‘indicated by a green sticker on the window, easily distinguished from the red stickers for smokers and the blue ones for first class’ lingered until 1977 but were ‘casualties of the Sex Discrimination Act’ passed two years previously.

Bradley does not ignore any aspect of train travel. Thus we are provided with great detail about the development of lavatories. In the early days, it was a matter of crossing legs or buying one of a variety of very Victorian contraptions which allowed even ladies to discharge their bladders without attracting the attention of fellow travellers. Women, too, were known to fill an entire compartment in order that they could bring out a basket that hid a chamber pot. Men had the easier expedient of opening the window, with a casual disregard to their fellow passengers downwind. The first toilets (a word that Victorians did not use) were provided for Queen Victoria, a reluctant rail traveller, and were introduced quite slowly as compartment trains were replaced with corridor carriages.

The development of sleeping cars was relatively late, starting in the 1870s, but had spread into an extensive network by the interwar period, with competing services linking London and Scotland, and many other towns and cities being served. And here Bradley makes a plea, suggesting that his readers should try the remaining two services in Britain — the Cornish Riviera Express linking London with Penzance, and the Scottish services out of Euston —for they offer many of the attractions lost to the railways, such as a genuine lounge bar. Like me, Bradley enjoys the ‘caravan-like charm of the space-saving devices of the compartment, such as the fold-down lid to the washbasin that serves as a sort of window sill’; and there is something irresistibly cosy about the experience, perhaps because the violence of the metal wheels careering along the tracks outside can still be heard.

The various themes are brought up to date and some of the recent history provides the most fascinating anecdotes. For example, the problem of the football specials occupied railway managers for many years in the postwar period, at its height in the 1970s when trains were regularly trashed and communication cords pulled so often that at times whole trainloads of fans were discharged at an obscure station in the middle of the night and left to find their own way home.

Railway histories tend to veer towards the technical, with far too much about locomotive types or banal details and a string of random facts put together with little context or understanding of the wider implications of the development of the iron horse. Bradley avoids these pitfalls and has written an authoritative and comprehensive history that entertains and informs in equal measure. This is a celebration of the railways that neither descends into nostalgia nor ventures into train-spotter land.

The reward for Bradley’s ambition in writing a comprehensive social history of the railways is that his book will sit happily on the shelves next to railway classics such as Jack Simmons’s The Railway in Town and Country, probably the nearest equivalent. This is definitely the book to give to that great uncle who you think is interested in trains. But it is also a fitting present for that railway buff who thinks he knows everything there is to know about the railways. This book will show he is mistaken.