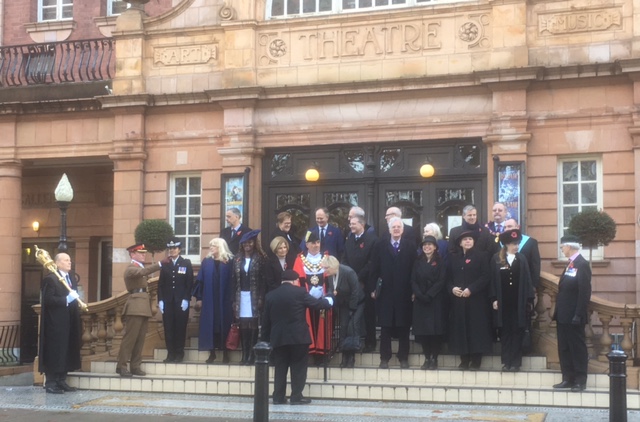 I was humbled to be invited to mark Remembrance Day in Richmond. It was a moving occasion highlighted, perhaps, by the election of Donald Trump which seems to have made the world a more dangerous place and increased the likelihood of war. All three main candidates were there and we marked the occasion together.

Looking at the huge number of names inscribed into the Richmond War memorial just below the Old Town Hall brings to life the fact that wars are so costly in every way. Not only do they use up vast amount of resources that could be spent in far more useful ways, but they bring tragedy and misery to thousands of families.

My father, born in Russia, actually fought as a Lieutenant in the First World War on the Eastern front against the Austrians. I doubt, really, if he covered himself in much glory. He told me once how he wandered into a forest to relieve himself only to suddenly find a burning sensation in the abdomen. He ripped open his shirt only to find that a nearly spent bullet had penetrated his clothing and the heat had burnt his skin. If that bullet had been fired from just a bit closer, I would not be here to write this today.

After a few months in charge of three guns, he was forced to flee, in the early days of the 1917 Revolution, when one night his sergeant came into his tent and said ‘Boris Semenovich, I advise you to leave as tomorrow the men are going to rebel against the officers and as you have treated us well, it would be better if you go to ensure your safety.’ My father consequently fled and managed to survive the rest of the war in difficult circumstances, eventually fleeing to France in 1919.

I thought of him as I stood in silence, thinking that he may not have been a hero, but he did his bit and served his country as best he could, just like millions of others. It was, therefore, a day of reflection and a realisation that we must learn from the past, avoiding conflict wherever possible.