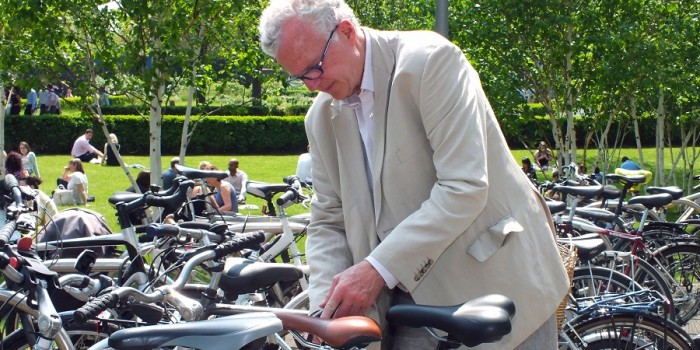 I have cycled more than 100 miles around the constituency in the past 10 days and I have got a good idea of the facilities for cyclists. And they are not impressive.

The best experience has been cycling through Richmond Park in the morning watching the deer munch the grass and display their impressive antlers. There are, too, a few sections where cycle paths are painted into the road and offer a modicum of protection, such as on the A 307 between Kingston and Richmond.

Cycling in outer London areas such as Richmond offers great advantages. There have been frequent occasions when I have reached my destination far faster than colleagues travelling by bus or even car. Overtaking streams of cars does prove to me, yet again, that riding my bike is far more efficient than any other means of transport.

It would not take much, therefore, to encourage a few more people out of these cars stuck in endless traffic jams. The distances in outer London may be greater but actually the energy expended in cycling is not necessarily more than for shorter distances in inner London as there are fewer traffic lights and junctions. I tend to get up to 15mph and cruise along. Kingston to Richmond in 15 minutes would be difficult to achieve by car.

However, there is no thought-out through route or any consistent facility for cyclists. Cycle lanes end abruptly, are often allowed to decay and become hard to discern among the leaves and damp, and many main roads have no facilities. There are a few shared paths but in the main cyclists are left to their own devices and consequently there are far fewer than in central London.

The worst route is the double track along the Lower Richmond Road. It is great that there is a track there because cycling on the road would be perilous. However, at every side road, the vehicles from the smaller road are given priority, and that is highly dangerous. It means that cyclists have to slow down as drivers are not looking out for them. In Holland and other cycle-conscious, the cyclists on the main road would have priority and there would be a staggered stop line on the side roads to take them into account. That is the sort of small, cost-free measure that makes life safer for cyclists.

Now for the politics. The LibDem and Tory councillors which have governed the local authorities in the area have clearly not considered the issue of cycling, beyond the odd token measure. Zac Goldsmith, supposedly an environmentalist, has not only done little to encourage improvements for cyclists, but actually, during his mayoral campaign, spoke out against a major cycling scheme in north London.

Thanks to the London mayor, there is now a plan to improve cycling in Kingston, but this has proved controversial and progress is slow. Yet, the issues of air pollution and cycling are interconnected. Just think – if there were a safe network of cycle routes around the constituency, air quality would be improved immeasurably and there would be a lot more fitter and healthier people. I would make this a priority if I were elected to represent Richmond Park.