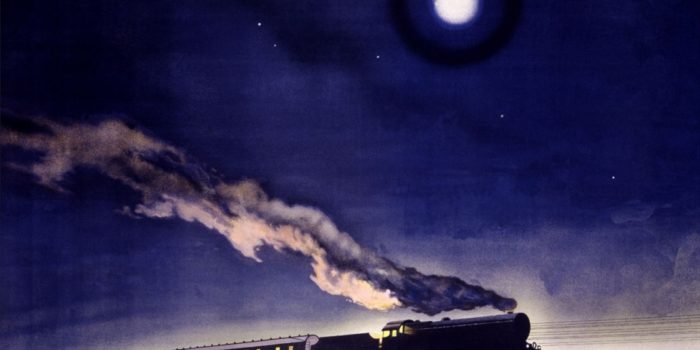 Night Trains, the Rise and Fall of the Sleeper by Andrew Martin, Profile Books, £14 99

As a child, I used to travel with my mother from London to Cannes, a journey that took a tad under 24 hours. The strangest part of the trip was the three or four hours in Paris where the train trundled between Gare du Nord and Gare de Lyon, along the Petite Ceinture, giving us a view of rundown parts of Paris which tourists never normally saw. Sometimes we would cheat and take a cab, giving us a couple of hours off the train during which we enjoyed a relaxed steak frites in the Train Bleu with its elaborate Belle Époque decor.

I often wondered why the train meandered so long in Paris, and Andrew Martin has now provided the explanation. Our carriages from Calais would be linked to others at the Gare de Lyon, which then became the eponymous Train Bleu, and which travelled overnight through to the Côte d’Azur before terminating at Ventimiglia, just over the border in Italy. Waking up to the red rocks of the Esterel mountains is a sight still seared in my memory.

The Train Bleu was part of a whole network of trains that crisscrossed Europe with passengers deep asleep to the tagadaga-tagadaga rhythm as their coaches thundered across the tracks. There was, Martin explains, a key difference between couchettes and sleepers – the latter were equipped with a washbasin in the compartment, though rarely a toilet (but occasionally a discreet sign mentioned that ‘sous le lavabo ce trouve une vase’).

Martin, in a laconic style that never becomes maudlin, describes many of these wonderful journeys, but laments that most of them are no longer possible. The railway companies of Europe have been taking a Beeching-scale axe to their night trains as they are heavy loss makers, given they cannot compete in price with the low-cost airlines.

Most notably, the Orient Express has gone. It had, in any case, like many of the other surviving trains become a shadow of its former self. Martin is particularly good at describing these night trains in their pomp, when they were the best, and sometimes the only, way of getting round Europe reasonably fast. However, the service declined markedly from the 1970s and what had being a service aimed at Europe’s elite became a very mundane one. My experience on the Orient Express in 2006, three years before it was finally killed off, was typical: the only food available was the worst crustless white plastic cheese sandwich I have ever eaten. A desperate raid of the automatic machines on Strasbourg station yielded only nuts.

Oddly, it is partly the European Union which has, in two ways, helped kill off so many night trains. First, it favoured low-cost airlines with hidden subsidies and a relaxed regulatory environment; then it broke up the railways, forcing them to identify loss-making services such as the night trains. Therefore, while the European Union has been reducing trade barriers and deepening the single market, cross-border railway services have been greatly reduced. Brexit will hardly help us, though it is heartening that we have two surviving services, serving Cornwall and Scotland, and the latter is about to receive a complete new set of modern carriages.

Martin’s pessimism is partly the result of the fact he confines himself too much to Europe, failing to mention other great overnight rail trips of the world, many of which still thrive in a world of high-speed trains and low-cost airlines. The crème de la crème is, of course, the six-day journey on the Transsiberian between Vladivostok on the Pacific coast and Moscow, but Amtrak, the state-owned railway in the USA, runs a series of very comfortable long-distance overnight trains and you can still enjoy the sleeper between Hanoi and Saigon (Ho Chi Minh City).

You do not have to be a trainspotter to enjoy this book. It is social history, a kind of epitaph to a way of travel that seems to be lost, at least in Europe. But hold on a minute. Martin wrote the book, he says, as a lament – but actually, he ends on a positive note. The Russians, it seems, have come to save us. Martin points out that they have just ordered 200 sleeper coaches, principally for domestic use but also on various European routes. Already RZD, the Russian state railway, runs a sleeper train between Moscow and Nice, though the fare is aimed more at your local oligarch who does not like flying than the backpacker who fancies a few days on the Riviera. There are even rumours, he writes, that the Russians may take over the French sleeper trains, which were nearly all, including the popular services to ski resorts, scrapped last year. The trains may mostly be loss makers, but Putin won’t mind that if it means a way of putting two fingers up to his European counterparts.