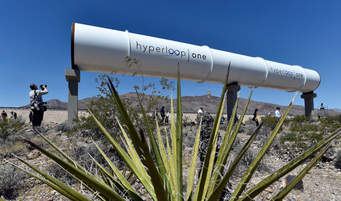 There are many ways to kill off projects and the Department for Transport is proving particularly adept at finding new ones. The latest is to use new technology. By that, I do not making use of whizzy new fangled devices to assess projects but rather suggesting that over the hill there is a completely different type of transport system that will make existing suggestions redundant.

The proposal to build a link from the south into Heathrow Airport has been around in one form or another for decades – remember Airtrack! By far the best worked up of the schemes is Heathrow Southern Railway, created in 2016 by a group of managers in the railway industry and which has attracted the interest from the large American consultancy Aecom. The company wants to build

eight miles of new line, mostly in tunnel, which would enable trains to connect from the south into Terminal 5, go through the main airport station and on to Paddington.

As I wrote last year, in Rail 866 ‘The idea, therefore, is that this would not just be an airport shuttle but, rather, be able to take commuters into work from places such as Woking and Basingstoke who work in West London and would therefore be able to avoid having to use Waterloo’. Now remarkably, apart from the need to have some guarantees about train paths and how much they would cost, this is an entirely private sector initiative. It may, of course, founder at a later stage but one would have thought that a Tory government would do everything in its power to push the idea, given it fits in so well with its preference for things private.

No chance. The proposal, which in any case was a response to government requests for schemes to be put forward,  has been stuck in the Department for Transport for more than a year and now seems to have had a further hurdle put in its path. The Department has just issued its response to the various proposals to improve Heathrow’s connectivity in a document called Southern Access to Heathrow: Strategic Objectives which now says that the name of the scheme has now been renamed ‘SAtH (Southern Access to Heathrow) to reflect ‘the mode agnostic approach taken through the development stages of the scheme so far and [to] encompass modes other than just heavy rail’. It continues: ‘While we anticipate that heavy rail will be a vital component of this project, there are other mode options and interventions such as light rail, guided busways and emerging technologies such as maglev and autonomous pods that could be blended with heavy rail to enable the realisation of wider opportunities and benefits’ (my itals).

This is beyond insane. If the Department accepts that heavy rail will be a key component of the project, then why on earth is it bothering with consideration of maglev or, for chrissake, autonomous pods at this late stage! Does it expect pods to be whizzing about on the same tracks as the trains? There is already a firm proposal on the table. It has been discussed for three years. Yet, now this search for the silver bullet of future technologies will delay things further with the Department now reckoning nothing will happen till 2030 while Heathrow Southern Railway reckons it could open its proposed route by 2026.

Not surprisingly, the chief executive of the company Graham Cross lived up to his name, by saying testily ‘Injecting uncertainty by considering experimental transport technologies largely untested in the real world will delay the commencement of this vital new public transport link’. For younger readers, maglev is a technology that has been proposed since before World War Two and never been shown to be viable in terms of its cost and capacity.

We have been here before, of course. More than a decade ago, hydrogen trains were all the rage and the Department for Transport was arguing that there was no point electrifying lines because the technology would soon be redundant. I wrote at the time that this seemed a way of simply delaying worthwhile projects. The wonders of my website allowed me to find the precise quote I wrote in Rail 568 in June 2007: ‘The prevailing view [in the Department for Transport] is that there is a danger that massive electrification schemes would be completed just as hydrogen technology came on stream…somehow the possibility of the arrival of this technology is reducing support for electrification when, in fact, sustainable ways of generating electricity – wind, wave, even arguably, nuclear – are available today. It seems that the DfT’s blue skies thinking is more pie in the sky’. History repeats itself.

The convoluted way that these processes are carried out is highlighted by some of the gobbledegook contained in the Department’s response which seemed to be designed deliberately to make sure nothing happens. It suggests: ‘Based on the feedback from the market that government support will be required, the market sounding findings report recommended that government should clarify its objectives for the scheme and provide more direction to the market on its minimum requirements’. In other words – or rather in plain English – the private sector wants to know what the Government wants from the scheme and then bid against it while the Government is saying come to us and suggest ideas. Again, pure madness given that the government published its ‘eight strategic objectives’ last year. With this kind of deliberate obfuscation, it really seems that the bureaucrats are striving hard to ensure that nothing happens and Heathrow, and the surrounding areas, will become ever more polluted and congested. Climate emergency anyone?

The case against fragmentation

While we are on the theme of things being kicked into touch, the early election has meant that both the HS2 and the Williams reviews have being kicked well into 2020. Boris Johnson has said that he has not made up his mind up about HS2, which may well be true, so let’s focus on the effects on the Williams review. It is pretty clear that Williams was all set to create an organisation with wide ranging powers over the railway, but the details remained to be thrashed out. What, though, if there is now a hung parliament or, in contrast, a Conservative overall majority. This will surely change the game.

I hope that Williams reads a book published this summer, Losing Track, by John Nelson, a vastly experienced railway executive who has worked in a wide range of roles both before and since privatisation. Nelson comes from that generation of railway managers who benefitted enormously from being able to work on every aspect of the railway and which is now far more difficult in the fragmented railway. Incidentally Nelson has welcomed the appointment of Andrew Haines as boss of Network Rail because of his wide experience of the industry.

His book is salutary but compelling reading.  Nelson covers the period when the railways were broken up and privatised during the mid 1990s in a great detail and highlights the appalling mistakes made at the time.  His chapters on British Rail are not viewed through rose-tinted spectacles as he clearly identifies mistakes but they show that breaking up the organisation was carried out for ideological reasons without any clear plan. He takes much the same approach as I did in my book On the Wrong Line, how ideology and incompetence wrecked Britain’s railways published in 2005 (and still available in Kindle or on other tablets), arguing that the process had purpose other than satisfying the Tory politicians’ wishes to break up British Rail: ‘: ‘the privatisation of British Rail appeared to be an end in itself, not serving any clearly articulated strategic objective other than a change of ownership’. However, as an insider, he provides some wonderful anecdotes as well as, more seriously, highlighting errors which still resonate today. His best story, demonstrating the utter failure of the early Railtrack managers to understand the industry, recalls how Euan Cameron, then the managing director of Thameslink, went to see Gerald Corbett, the Railtrack chief executive. He had great difficulty arranging the meeting and on entering the room Cameron reports he was told: ‘I don’t know why we’re having this meeting. You’re too small a company to warrant much attention.’

The franchise process was completed by Spring 1997, in time for the election that May but the rush to get all the operators into the private sector meant, as Nelson puts it, that many of ‘the new entrants were flying by the seat of their pants’, struggling to cope with the exigencies of an industry that was much different from their previous business experience, which was mostly in buses. Moreover, the finances of the inaugural franchises, which were mostly five to seven years long, were fundamentally flawed. Nelson carried out a study in 1998, just a year after the completion of the franchising process, and found that several had made totally unrealistic bids, reliant on increases in passenger revenue that could never be achieved. Sounds rather familiar given recent events!

All this is relevant to today’s situation. The franchise system is still facing the same fundamental issues which it has struggled to resolve in the intervening two decades. Nelson is clear about the fact that a vertically separated railway, with track and infrastructure being run supposedly independently of operations is at the heart of the difficulties faced by the railway. He struggles to find a model that is not pure renationalisation, as he wants to retain some private sector involvement. But on integration he is utterly unambiguous: ‘It is now beyond doubt that other than in defined, exceptional circumstances where Government wishes to promote competition, the separation of track and train management should not be allowed to continue other than as a stepping stone to a phased integration’. The McNulty review nearly a decade ago was, according to Nelson, precluded from putting forward integration as the solution. The same mistake should not be made. Williams please note.

Two errors crept into my last column and I am delighted that so many Rail readers are alert, though most only spotted the first and not the second which was arithmetical. I wrote that the third rail on the Waterloo to Exeter line stops at Salisbury when, in fact, it runs out just west of Basingstoke at Worthing Junction. I also mentioned that there were 100,000 daily passengers at Cranbrook which was pretty unlikely for a town of 5,000 souls – it should, of course, have been annual.

I apologise profusely and am very grateful for those who took the trouble to write, even the minority who were slightly rude!