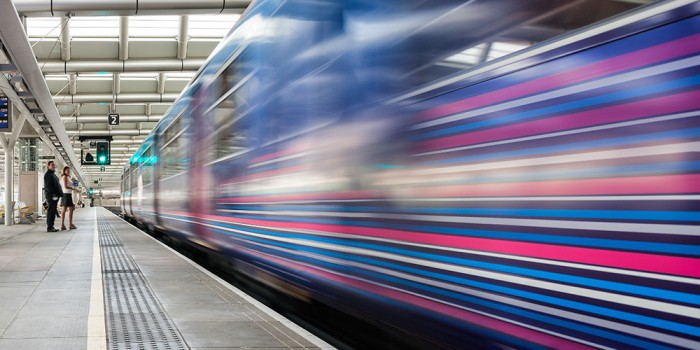 The start of a new year, decade even, is obviously a time to both reflect on the past and to look to the future. The latter is more fun and interesting, but first just a few words on the past.

Looking back at the column I wrote a decade ago as the last of the noughties is instructive. In Rail 634 (you can find it on my website), I set out how the desire for massive private sector investment in the rail industry had pretty much come to naught. In the previous decade, Railtrack had metamorphosed into the pretty much state-run Network Rail, a status which has now been made official and at the time I was writing the Public Private Partnership in the London Underground was on the point of total collapse. Indeed, in one of his better predictions, Mystic Wolmar correctly suggested in that article that the PPP would soon be completely subsumed within Transport for London.

The columns I wrote at the time focussed very much on the structure of the industry (plus ça change) but there was very little about technology. Sure, the introduction of the Train Protection & Warning System to reduce the risk of signals passed at danger had been completed and was already proving to be a great success but otherwise there was little discussion of any silver bullet technological solutions. There was the vague prospect of hydrogen fuelled trains but by and large the development of technology in the rail industry was seen as evolutionary rather than revolutionary.

That changed completely. During much of the past decade, particularly after the appointment of Mark Carne as chief executive of Network Rail in 2014, there was much emphasis on the digital railway with suggestions that installing in cab signalling could double capacity. Fortunately, the arrival of David Waboso to head the digital railway team at Network Rail dampened the over enthusiastic expectations and although he has now left the far more realistic leadership of chief executive Andrew Haines will ensure that techie temptations are kept to a minimum.

Not so, however, in the outside world and this is worrying. Far from abating, the hype around new tech solutions, some of which pose a direct threat to rail, is increasing. Driverless cars, drone taxis, hyperloop pods and little R2D2 type delivery vehicles hopping around our pavements are all touted as the future.

My inbox fills up with this stuff every day. For example, just as I was writing this article, I got a press release from Keolis – which, remember is 70 per cent owned by SNCF, the French state rail company, and is part of the GoVia franchises brand – which was headed ‘Could 2020 be the tipping point for autonomous vehicles?’ and went on to say: ‘The benefits of autonomous vehicles are clear. Research from the Society of Motor Manufacturers and Traders (SMMT) revealed that their introduction could be worth £51 billion to the UK economy alone every year by 2030, with the potential to create 320,000 jobs. They could also help to avoid around 25,000 road accidents every year thanks to reduced driver error’.

This is total nonsense. There is currently no evidence that this could happen in that time frame, and the claims are just outlandish. Indeed, there were numerous announcements last year about delays to trials and tests of this technology as witnessed by an article I was sent on the same day from The Information website. It was a piece about how Uber continues to lose shedloads of money and how its market capitalisation has plummeted since its initial share offering last year. On driverless cars, the article said: ‘Despite having spent more than $1.5 billion on development over the past four and a half years, Uber wasn’t able to get its prototype vehicles to travel reliably between two of its offices in Pittsburgh, located about one mile apart, said a person with direct knowledge of the situation.’

That’s the reality behind the hype. After possibly up to $100 billion (yes billion) has been spent on the development of driverless cars worldwide, it’s not yet proved possibly for a car to operate reliably between two nearby offices in a city built on the grid system.

Other much touted technologies can be dismissed just as easily. The most egregious are the various initiatives around hyperloop. This is really just a development of maglev technology but with the added idea of creating a vacuum so that there is no resistance to the progress of the pods which would travel inside a tube. This idea, like driverless cars, is promoted by Elon Musk but even the most cursory reality check shows that economically it is simply unviable. The capital investment required will be enormous, as will be the operating costs because of the energy required and yet the maximum number of people that could be carried in each pod is reckoned to be around 30. Even that optimistic figure suggests that, as a safe interval would have to be provided between pods, a throughput of at best 1,800 passengers per hour, a fraction of the numbers carried by any metro system.

I won’t even waste time on the unlikely notion that flying taxis in urban areas or delivery by drone (who knocks on the door?) are potential solutions to transport problems. However,

the most nebulous and yet ubiquitous concept at transport conferences in all this hype  is the idea of Movement as a Service or MaaS. This mysterious concept is apparently all about people being able to buy all their transport services through a single app. The concept is predicated on the idea that people will no longer cars but will rent them or use taxis, trains, trams, buses or bikes as necessary. However, despite a decade of discussing the concept, very little concrete has emerged and trials, such as one in the West Midlands, have largely seen low take up. After all, as I have pointed out many times in speeches, my contactless card in effect provides access to most of these services. My view is that it is an attempt to get the private sector involved in providing public services.

So my little look in the future suggests that we are in for pretty much more of the same. It does not take Mystic Wolmar looking into his tea cup to suggest that it is unlikely that by 2030 – or even 20 50 – a completely revolutionary form of transport will play the dominant role in mobility.

Sure some aspects of technology will be helpful. There might well be a role for batteries on trains or even hydrogen power (though I am sceptical of the economics) and clearly modern signalling systems can offer enhanced capacity. Bus apps and other such aids are a great idea but they are not revolutionary. By and large just as in 2010 we were travelling around in cars, buses and trains powered by long established methods of propulsion, the same will be true of 2030, with a greater emphasis on electric rather than internal combustion (and while on that subject, please Grant Shapps or whoever is in charge, revive the electrification programme and stop pushing for more bimodes. The important point to emphasise is that politicians and their professional policy makers who advise them need to understand the limitations of technology and not accord any credibility to the hype merchants. And they need to continue investing in old technology like, euh, railways.

But first, how did he score for 2019. Here were his six predictions (plus one football)

Well, number 1 and 5 were spot on but 3 was wrong as numbers grew and 4 is just about correct though only very marginally. The Williams Review will actually not be published as I understand it, but it is impossible to know whether 2 is correct. Mystic was a bit unlucky about number 6 which was correct until Dec 12th – so a poor 2.5 for Mystic this year. As for QPR, (sigh) they only won three games in the rest of the season.

Oh, and QPR will reach the play offs and the 6th round of the FA Cup