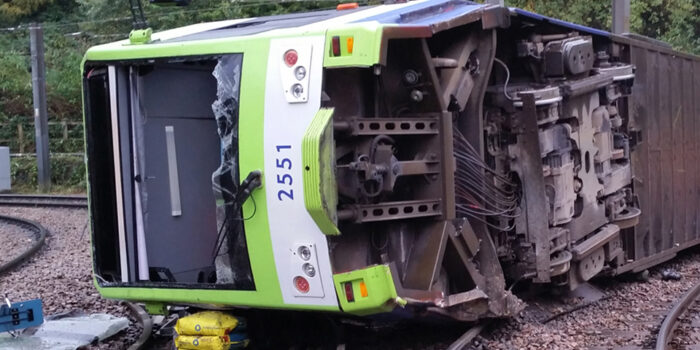 For more than a century and a half, rail safety has improved thanks to learning from the causes of past accidents and, particularly, serious disasters. However, the ‘accidental death’ verdict of the jury in the recent inquest into the Croydon tram accident in November 2016 is the latest episode in a saga that seems set to prevent the real story of this eminently preventable disaster ever being exposed.

The immediate causes of the accident are relatively straightforward. The early morning service running from New Addington towards Croydon approached a sharp bend with a 20 kph speed limit at 73 kph and consequently derailed, overturned and ended up on its side 25 metres from the point of derailment. Seven people were killed and most of the rest of the 69 passengers suffered injuries, some severe.

The immediate cause was clearly overspeeding but as ever with such accidents, the circumstances are more complex. In particular, how come the driver was heading into a bend at 50 kph above the limit? The answer is that he had most probably fallen asleep. The accident was at a bend that followed a long straight stretch through three tunnels and where the limit was 80 kph, the maximum speed at which the trams can operate.  Concerns about this stretch of track had been expressed as far back as 2008 and at one point it seems there had been a series of intermediate speed limit signs but these had at a later stage been covered over. Therefore drivers were expected to slow down in a very short space of time having just come out of a tunnel. There were numerous examples of overspeeding on this stretch but none at such a high level until the disaster when by far the most likely explanation is that the driver had suffered a microsleep.

In other words, there were clearly two underlying causes: a difficult stretch of track and the driver’s fatigue. One obvious route of inquiry, if we are to learn the lessons from this disaster, would be to consider whether the driver’s fatigue had underlying causes such as a poor rostering system, a failure to investigate past incidents or a pattern of such incidents. However, the Rail Accident Investigation Branch report on the disaster, published in seems to bend over backwards to avoid considering any systematic failure by the tram operator.  In a curious sentence, the RAIB report says: ‘During the investigation, the RAIB observed that, although not a factor in the accident at Sandilands junction, TOL’s management of the risk of tram driver fatigue was not always in line with published industry practice.’ This seems illogical. If the crash was, as we know caused by the driver falling asleep, then surely measures to mitigate such a situation and manage such events could have prevented the disaster. Moreover, how can the RAIB conclude that while management of fatigue ‘was not in line with industry practice’, this had no bearing on the accident.

In fact, the RAIB had to add an extra section of the report a year later when it came to light that Transport for London had failed to submit a safety audit about fatigue management to the initial investigation.  Although commending aspects of TOL’s management of fatigue, it highlights seven weaknesses such as lack of training, failure to implement best practice and the absence of a comprehensive reporting process. While Transport for London’s very failure to submit the audit report to the enquiry should have rung alarm bells, the RAIB addendum blithely suggests that nothing raised in it changes its conclusion that TOL’s management of risk fatigue was not a contributing factor to the accident, despite the seven weaknesses highlighted by the audit.

All this is bad enough but the failures of the RAIB have also completely undermined the next possible potential enquiry, the inquest which was held this summer nearly five years after the accident.

The Coroner, Sarah Ormond-Walsh, made a series of decisions which limited the scope of the inquest. She refused to call witnesses on the basis that there was a legal precedent which suggested that once there had already been an enquiry – in this case by RAIB – then inquests should not repeat the process. Moreover, despite attempts by the victim families’ legal representatives to suggest that the RAIB enquiry had been inadequate, she resulted that she did ‘not accept that the RAIB investigation was incomplete, flawed or deficient’.

Yet, Michael Liebreich, a former board member of TfL and the chair of its safety audit panel between 2016 and 2018 who has campaigned for a thorough enquiry into the accident, has pointed to numerous additional flaws and omissions in the RAIB in addition to those cited above. For instance, the RAIB did not consider the fact that six drivers had been sacked for falling asleep prior to the disaster or not being able to give a satisfactory reason for their inattention. Given that the response by management to an admission of falling asleep was to sack the person concerned, Liebreich reckons that many such incidents went unreported. Nor did it reveal the fact that the Croydon driver had been taking medication for high blood pressure which may have resulted in disturbing his sleep because it was a diuretic.

Leibreich, in a letter to the Attorney General in support of the victims’ families demand for a fresh inquest, said: ‘RAIB did not so much as look at the Operating Agreement between First Group and TfL – yet this was the contract which governed their relationship, divided up safety responsibilities and lay at the core of the safety culture at the time of the crash’. He is concerned that the kind of imperative to run to timetable that governs bus contracts may have been replicated for the tram system, meaning there was pressure on the operator to run tightly to schedule despite safety concerns. ‘It seems that they were running a tram system like a bus operation, and London’s record on bus safety is appalling’.

Leibreich also points out that the relationship between TfL and FirstGroup should be examined as ‘there was a revolving door with numerous executives transferring between the two. For example, Leon Daniels, the managing director of Surface Transport at the time of the accident was a former director of Tram Operations Ltd  while John Rymer, the managing director of Tram Operations Ltd, used to work for Daniels. None of this was considered by RAIB.’

As a result of the Coroner’s decisions, the jury was left with very limited options, either ‘accidental killing’ or ‘unlawful killing’. However, because there was no consideration of the company’s actions, , ‘unlawful killing’ would have implied it was the driver’s fault, rather than the responsibility of the company that put him in a position of risk.  The jury was clearly uneasy about its lack of choices and spent nine days deliberating before returning a verdict of ‘accidental killing’.

This finding goes against much of the investigation of many railway accidents which over the years has resulted in wider factors – such as, for example, the absence of safety features such as Automatic Warning System – being taken into account by investigators.  Moreover, the failure to investigate wider causes has left victims’ relatives in a legal limbo land. Jean Smith mother of victim Mark Smith said after the inquest: ‘It’s morally wrong that we haven’t been able to hear from anybody from TfL, TOL or the driver during the proceedings, whatever legal precedent says. It feels like they have been able to hide from giving evidence and it simply isn’t fair or just. Justice has been suffocated because of the coroner’s ruling.’

It is difficult to argue with that. The Sandilands accident needs a thorough investigation which sadly so far neither the RAIB nor the inquest process has delivered. The families are now seeking a Judicial Review to query the finding, but that is a difficult process. This needs political intervention from the Attorney Generall to ensure that justice is done. Liebreich suggests that ‘this is Hillsborough repeating itself. It took 25 years for those families to get the original inquest verdict quashed. This must not happen again.’

(This article has been amended following information supplied by FirstGroup)

On August 16, the Department for Transport issued a press release full of optimistic predictions about the railway from rail minister Chris Heaton Harris – he of the terrible Twitter jokes.  Unfortunately, it was released on the day that Kabul fell, so it was a bad day to release what the minister reckoned was good news.

I commend Mr Heaton-Harris’s optimism but think that unfortunately it is unfounded.  He reckons that passenger train numbers will return to normal and reach levels achieved before the pandemic. However, he said ‘I don’t think there’ll be the numbers at the same times of the day that there used to be’.

My view is that those two statements are irreconcilable. At the moment, while car use has returned to pre-Covid levels, trains are running carrying around 45 per cent fewer people. The loss of a huge chunk of the commuter market, which is generally accepted is inevitable, cannot be made up by off peak and leisure travel. The numbers simply don’t stack up. Yes, there are signs that there are a few extra travellers on seaside routes and on a few inter-urban flows, but by and large numbers are down across the board.

If, as seems likely, many people work 2-3 days in the office instead of five and numbers of commuters fall by 20 per cent, then there would have to be a massive influx of people onto trains at other times. Moreover there is not the space to accommodate them. Train schedules would have to be reorganised and rolling stock moved to different routes, not an easy task in a fragmented and partially electrified railway.

Therefore if such optimistic statements are to be realised, then the Department has to be working very hard on examining where the new markets might be and how to encourage a new breed of passenger onto the railways. Unfortunately that is rather more difficult than putting out Tiggerish predictions.