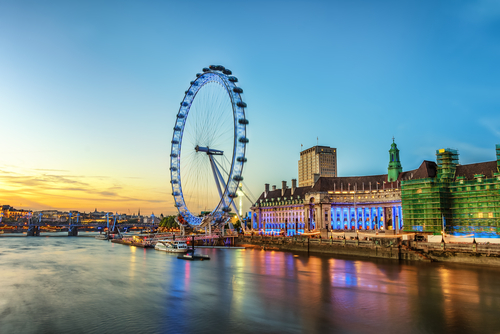 I love London, my home town and one of the great cities of the world. It is a much kinder and easier place than many imagine – the other day on my way to take the train to Brighton, the ticket clerk at Finsbury Park saved me £3 by selling me a ticket from there rather than Victoria (why is that cheaper?) and the barista gave me an extra free tea bag as I said I like strong tea.

But the government has the capital in its crosshairs, an insane strategy that can only be harmful to the whole country. Levelling up, it seems, means doing London down and

Raw politics is leading to a stand off between national and local government which could do immense harm to the capital and its potential to contribute to the rest of the economy. Transport and particularly the cost of running the Underground is at the heart of this dispute. While the pandemic is the immediate cause of Transport for London’s financial troubles, the root cause stretches further back in time when in 2015, the then Chancellor George Osborne (remember him) decreed that over the next three years, the government grant for Transport for London’s operating expenses would be phased out. This is a unique situation which no other local administration in a major city is expected to achieve. Moreover, there was something of a decline in public transport usage before Covid. In 2017 there was a fall of 5 per cent in Tube journeys and while that was regained over the following two years, it meant that the growth on which Osborne’s expectation was based did not materialise. Bus use reached its peak in 2014 and rather struggled since then with small ups and downs each year.

And then the pandemic hit. With Tube use down to around 5 per cent for a couple of months in the first lockdown, and then hovering around 20 per cent until March 2021, it is not surprising that TfL needed bailing out. So far three bail out payments have been made, totalling £4.5bn but this is only sticking plaster given that the annual passenger income of around £5bn fell to less than a third of that and is still struggling to reach £3bn.

And even those payments were made begrudgingly after lengthy negotiations and much politicking. In the spring, before the last bail out, Boris Johnson and several of his ministers were in all seriousness blaming Sadiq Khan for the difficulties. Sure, Khan won election on a policy of freezing fares which probably cost around £200m annually but nothing like the amount needed to compensate for the effects of Covid.  He has lost the expected revenue from Crossrail but despite claims to the contrary, that has nothing to do with Khan. The way that this was turned against the Labour mayor by Tory politicians was quite shocking and base politics, a terrible reflection of the way that political integrity seems as old fashioned as steam engines and black and white TV.

The third bailout is about to expire on December 11 and Andy Byford, the transport commissioner who has been in post just over year is determined that this hand to mouth feeding should end. I met him on September 22nd just after he had released a statement about TfL’s finances which amounted to a strong plea for a sensible accommodation with central government.

Byford speaks about a ‘death spiral for London’ unless there is a secure long-term deal, and is strongly resisting the 4.8 per cent fare rise that the current formula would deliver. He told me: ‘If you are not careful, we will be in a death spiral whereby services are reduced and then the interval between services get longer, the trains get more crowded and less reliable, and people become reluctant to use them.’

Interestingly, he feels that the train operating companies, who were bailed out within a few days of lockdown being announced, have been treated more kindly than Transport for London, hinting that this is all a political game being played by Whitehall.  He insists that he does not want to be ‘steamrollered’ into making cuts because having extra capacity gives people the opportunity to start using the system again.

His overall message could not be clearer. This is about London and the wider British economy. He said: ‘London generates some £39bn net tax for the Exchequer in a normal year’. He points to how Crossrail has benefitted suppliers all around the country and laments that Crossrail 2 and other rail schemes like the Bakerloo Line extension have been put on ice.

To rescue London from this shorter ism, Byford has put forward a deal that would fill the current gap of £500m annually and ‘if we can fill that gap, we can get back to being financially self sufficient by 2023’. While figures have stagnated for the summer at around 55 per cent for the Underground journeys and 70 per cent for bus journeys compared with pre-Covid levels, there were signs by mid September that numbers were starting to rise again. Thursday 2 September was the first time that two million journeys were taken on the Tube in a single day since the pandemic began and that has now become the norm (compared with more than 3 million pre Covid). Buses, too have seen a significant increase since to children returned to school at the beginning of September.

In fact, this should be a period of celebration at TfL having just oened the first new Tube stations in 15  years and getting ready for Crossrail, the biggest transport development in the capital since three Tube lines wer opened in 1906/7. Byford is passionate about and told me ‘Crossrail was why I took the job and I insisted that I should be responsible for it during the final stages.’ Indeed, that has happened. The Crossrail board was disbanded in October and now the project is entirely in TfL’s hands. He has promised there will be no more extra demands for cash beyond the now expected £18.9bn and there is a commitment that the main tunnels will open for service in the first half of 2022 – even though there will initially not be any trains running the whole way between Reading and Shenfield (tho as Crossrail’s Class 345 trains are now running all the way to Reading, Freedom Pass members can actually get both there and to Shenfield for free as long as they stick to the slow Crossrail trains and not Great Western!).

Byford is amazingly enthusiastic about Crossrail, a feeling I share as I have always said, this is a world class railway which will make other cities green with envy. There is, therefore, good news on the horizon but if ministers keep on playing hardball with TfL because of narrow party interests, London will lose out. Forcing a 4.8 per cent rise on London fares will only encourage congestion at a time when the roads are already full and public transport is underused. London and our national economy will be the loser to which is contributes. Ministers need to have the courage to park their party loyalties and work an accommodation with Khan who also must be flexible but who is, frankly, powerless. It would be nice to think there are grown-ups in the government ready to sort out the mess for the sake of London and its people, but I am not holding my breath

I have been greatly impressed with the way that the Rail Industry Association, which had become almost redundant, has reinvented itself under the leadership of Darren Caplan, who has been chief executive for four years. The RIA has become a voice for the industry with much greater media coverage than previously and has produced a series of useful reports on the state of the industry and its requirements.

I was particularly gratified that RIA has started meeting people again physically, and indeed had a press conference, the first one I have been to in 18 months, to launch a report on The Economic Contribution of Rail. But – and there had to be one, I’m afraid – the RIA rather let itself down by producing research that had been completely taken over by events. The report was based on pre-Covid rail use in 2019/20 rather than 2020/1 when, of course, usage at one point fell to 5 per cent of previous passenger numbers.

We are living in a completely different world.  If, as many expect, the railways will be reoriented to catering for leisure customers and longer distance journeys rather than commuters, the economics of the industry will be completely changed. Indeed, government may well decide that pouring £10bn(twice the pre-Covid) level so that people can go on their hols or visit friends across the country may not be money well spent. When asked, the RIA explained that figures for 20/21 were not available as there were gaps in the data and therefore the analysis could not be carried out. Along with the other attendees at the press conference, I found that explanation rather unconvincing. Either RIA should have waited for the most recent figures to emerge, or simply not bothered. Life has changed and an analysis on what the implications of that would be a worthwhile exercise, even based on incomplete statistics and possible future scenarios.