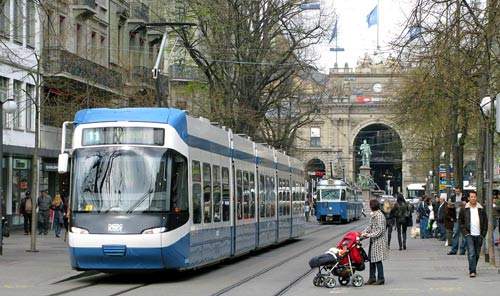 Zurich, with a population of 400,000, is one of the most pleasant places in the world to live with its beautiful swimmable lake and its proximity to the mountains. Despite being one the most affluent European cities, it can also boast one of the highest rates of public transport ridership and lowest use of cars.

This is particularly surprising because Zurich is not a densely populated city – it has extensive suburbs which anywhere else would suggest a high rate of car use. The city’s density is well below that of many European cities, so it needed a strong political mandate in order to achieve its exceptionally high public transport usage The story of how Zurich’s public transport system developed is a fascinating one.

Zurich could have been very different.  Its  highly efficient, low-carbon transport system is not a matter of luck nor the result of topography, but rather came about because of a series of political decisions to actively promote public transport and sustainable modes such as cycling and walking rather than try to cater for the rising number of cars.

In the 1960s, Zurich was just like so many other major cities.  Faced with increasing demand for road expansion it was poised to embark on a programme of roadbuilding to create a network of urban motorways.  For Zurich, the big barrier for the supporters of road expansion was the tram network which already took up huge swathes of the road space which city planners were seeking to reallocate to cars. Their idea was for a ‘balanced’ approach to city transport, involving both urban motorways to cater for car users, together with a network of underground railways to replace the main tram routes, and ground-level bus routes for the rest.

This was a model favoured by many German cities at the time, as it appeared to offer the solution to the growing transport problems faced by growing car ownership. However, the concept was fundamentally flawed because of the impossibility of expanding the road system while retaining the delightful architectural features of a traditional European city. A referendum in 1962 was the key moment when Zurich could have gone the way of German and other European conurbations, and committed itself to an urban motorway system. But much to the surprise of the politicians who across different parties had supported the idea, the people of Zurich rejected this ‘balanced’ approach.

This left Zurich in a state of limbo for almost 10 years, with no clear strategy on how to deal with the growing pressures on transport networks in the thriving city. A second referendum, in 1973on a plan for a more extensive metro system was but which displaced most of the existing tram system underground, was also defeated by the people of Zurich. The opposition was led by a coalition of students and environmentalists concerned about the high cost and the increased traffic from the scrapping of the tram system.

Those opposition activists had an alternative proposal. The coalition, called the  ‘People’s initiative for the Promotion of Public Transport’, based their proposal on the radical ideas of E.F. Schumacher. Schumacher was an influential German-born economist who developed the concept of ‘small is beautiful’ and supported solutions that were based on existing technology.

The core idea of the People’s Initiative proposal was an upgrade of the existing tram and trolleybus systems, giving them priority at junctions and higher service frequencies. Crucially, giving trams priority over cars at junctions means they would not need to slow down except for stops to pick up and discharge passengers. This is clear benefit over the bus network using urban motorways, which would suffer from all the service delays that conventional buses in other European cities do today. The proposal was a success. Despite opposition from the city engineers’ department, which still sought car-based solutions, the proposal was voted through at a third referendum in 1977 by a narrow majority of 51 per cent.

The 1977 referendum was the turning point, and from then on, Zurich embarked on a series of strategies aimed at boosting sustainable modes of transport. The city council gave its support to the proposal too, rejecting the earlier notion of the ‘balanced approach’ and instead explicitly supporting measures that gave precedence to public transport. Their support fed through to residential areas in the suburbs, where traffic calming and what are now called ‘low traffic neighbourhoods’ were introduced throughout the city.

The results were spectacular. By the year 2000, the numbers of people using public transport to get to work had increased from around half to two thirds, with just 19 per cent travelling by car. Carbon emissions fell from six tonnes per person to five which is half the level in most other cities. All the trends have remained in the right direction. Car ownership has reduced to just over a third of households and car use fell by 15 per cent between 2000 and 2015 while tram patronage rose by 11 per cent.

Moreover, the process of reducing car traffic while prioritising other modes has continued, as Zurich has subsequently adopted even more radical environmental measures. In another referendum in 2008, the people voted to reduce carbon emissions in the city to a cap of just one tonne per person by 2050, constituting an 80 per cent cut in emissions. They also voted to adopt the aim of becoming a ‘2000-watt society’, meaning that energy consumption per person would fall to that level.

Interestingly, this amazing success has been achieved through the use of ‘carrots’ rather than ‘sticks’. Instead of imposing road user charging, which has been widely supported by transport planners across the world – but less so by politicians reluctant to antagonise their electorates – as the perfect solution to traffic problems, Zurich embarked on a policy of making its public transport so efficient, economic and frequent that the car was virtually made redundant. Why spend all that money on fuel, parking and maintenance when cheap, reliable and clean public transport is available which, thanks to tram priority junctions, will get you there quicker anyway.

Zurich is a beacon for other cities but it required its citizens to take the lead in developing the right policies which suggests the importance of grass roots movements in shaping the local transport system. Its success is based on politicians listening to the voices of the people and then being prepared to take radical action to bring them about.