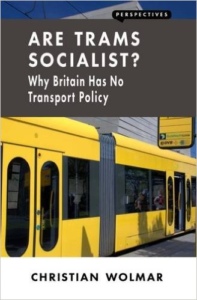 Transport is key to our daily lives. The transport system is essential to ensure the movement of people and goods, and most of us will use the roads or public transport every day. Vast sums are tied up in it and are spent on trying to resolve the problems of congestion and delays. And yet it is a most neglected field of politics. Britain has never had a coherent transport policy. Transport ministers are regarded as minnows compared with their ‘big beast’ colleagues in other ministries. Successive governments have barely attempted to get to grips with the challenge of getting people around efficiently and safely while limiting the environmental damage caused by transport.

In this entertaining polemic, Christian Wolmar, an author and journalist who has written about transport for over two decades, explains why politicians have not addressed the crucial issue of balancing transport needs with environmental considerations. Instead, they have been seduced by the popularity of the car and pressure from the car lobby, and they have been sidetracked by dogma. Solutions are at hand – and successful examples can be seen elsewhere in Europe – but courage and clear thinking are needed if they are to be implemented.

This book is an entertaining and knowledgeable explanation of why British transport policy is a mess. It’s also a clarion call for change: for better public transport, for proper funding of cycle networks, and for a system of road pricing to make it all work. It should be required reading for any transport minister.
Stephen Joseph, Chief Executive, Campaign for Better Transport

Christian Wolmar’s persuasive and detailed critique of decades of transport policy blunders in Britain should be essential if grim reading for every incoming minister at Whitehall’s Cinderella department.
Jonathan Prynn, former Transport Correspondent for The Times and current Consumer Business Editor of The Evening Standard

This splendid book captures the intellectual bankruptcy of British transport policy with wit, good humour, sound evidence and powerful insight. Any nation that can keep building new roads with the stated intention of creating jobs or reducing congestion, when all the evidence shows that this is a forlorn hope, has lost the plot and if there is a stage beyond losing the plot, Wolmar shows that this is HS2. Lost opportunities, environmental destruction and catastrophic money wasting are depressing subjects but Wolmar provides a rich and enjoyable analysis of the strange world of British transport policy and shows what we have to do to get it right. For that he should be congratulated.
John Whitelegg, Research Associate, Stockholm Environment Institute