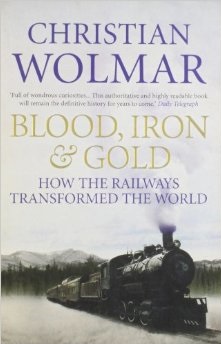 The opening of the Liverpool and Manchester Railway in 1830 marked the beginning of a revolution in transportation. Blood, Iron and Gold reveals the huge impact of the railways as they spread rapidly across the world, linking cities that had hitherto been isolated, stimulating both economic growth and social change on an unprecedented scale. From Panama to the Punjab, Tasmania to Turin, Christian Wolmar describes the vision and determination of the pioneers who developed railways that would one day span continents, as well as the labour of the navvies who endured horrific conditions to build this global network. Wolmar shows how the rise of the train stimulated daring feats of engineering, architectural innovation and the rapid movement of people and goods around the world. He outlines how cultures were enriched – and destroyed – by the unrelenting construction and how they had a vital role in civil conflict, as well as in two world wars. Indeed, “Blood, Iron and Gold” reveals that the global expansion of the railways was key to the spread of modernity and the making of the modern world.

“Christian Wolmar has long been known as the best-informed expert and deadliest critic of Britain’s farcically ill-run railway system. Now, in Blood, Iron and Gold: How the Railways Transformed the World (Atlantic, £25), he reveals some of the passions behind all that, and his immense knowledge of how the iron horse has shaped world history since its first invention.“   Independent, Stephen Howe