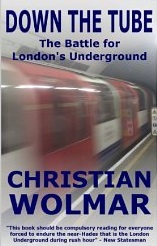 Strikes and the threat of strikes, breakdowns, signal failures, crumbling infrastructure and rising crime – for every Londoner, and many commuters, too, the disastrous condition of London’s underground system is a daily reminder of the political and managerial failures that have brought a critical public service to the verge of collapse. Now that the Labour government has committed the future of the Tube to the Treasury’s Public/Private Partnership Scheme, the question is: in ten years’ time will we see as promised, a refurbished and revitalised system? Or will we be lamenting yet another instalment in a long litany of failure?

Christian Wolmar is not optimistic – indeed, he sees every prospect of a reprise of the consequences that flowed from the privatisation of the railways, which he analysed so trenchantly in his previous book “Broken Rails”. So how, he asks, did we get into this situation? Why was the Tube starved of investment by successive governments over so many years? How did the present government allow it to become a political football, a vehicle for “punishing” Ken Livingstone for the humiliation he had imposed upon them in London’s first mayoral election? Why do ministers still believe, after the collapse of Railtrack, that the separation of operations from maintenance and renewal is anything other than a recipe for inefficiency and a threat to safety?

In Down The Tube Christian believes the 1930s were the Tube’s finest hour, managed in effect by a public-private partnership but aided by a hands-off Treasury. However, he considers that ‘if any period could be identified as the source of the state of the Underground today, it is the immediate post-war period up to the 1960s when, quite literally, nothing was invested.’ By the Eighties, the Tube system was in total disarray and Christian’s anecdotes remind us of a forgotten era where Unionised staff ruled the roost with money-making scams the norm. One ticket collector, he says, ‘made the mistake of dying, and when his locker was broken into, it was found to be full of unopened wage packets with cash inside. He had lived entirely off the proceeds at the barrier.’

The PFI initiative then, is just the latest in a long line of attempts to regain control of the Tube, but is turning out to be just a tragic replacement of one bureaucratic approach with another. Decades of underinvestment have been followed by five years of argument over its future.

This is a tale of conspiracy and intrigue with a rich cast of characters – Tony Blair, John Prescott and his puppetmaster, Gordon Brown, on the one side and Ken Livingstone and Bob Kiley, the manager Livingstone brought in to save the Tube, and his mysterious coterie of fellow Americans, on the other. For Londoners, though, the critical question is whether all these players can now put the antagonisms behind them and recreate a transport system worthy of a great capital city? There could be no one better than Christian Wolmar to explain the legacy they have inherited and to analyse the problems they will face in the future.

Christian spent almost a year talking to everyone concerned with the Public Private Partnership: the executives at London Underground who devised the contracts with the consortiums that were taking over maintenance and improvement to tracks and trains, the lawyers and consultants who advised on them, the contractors who will profit from them, Ken Livingstone and Bob Kiley who have to implement them and the transport experts who have almost unanimousky declared them unworkable.

He came to the conclusions that the PPP:

In giving a blow-by-blow account of the process by which the Government foisted this ill-concieved scheme on a reluctant capital, Christian Wolmar reveals many hitherto unpublished aspects of the negiotiations, including first-hand accounts by many of the principal participants, and shows why the PPP will now fail to achieve most of its original goals.

Writes Christian Wolmar in his conluding chapter: ‘I set out on the research for this book in the genuine spirit of inquiry. Listening to London Underground’s argument in favour of the PPP there were moments when I thought it might have merit. Or at least I did for an instant. But as the expanations led on to further complexities and explanations, I just wanted to say, in the words of John McEnroe, “You cannot be serious.”‘

Down the Tube was shortlisted for the George Orwell prize.

What they said about Down The Tube…

‘leading transport commentator Christian Wolmar … has done a credible job of making a book about trains and rail bureaucracy interesting.’
The Politico

‘In this book, and in his rigorous efforts over the years, leading transport journalist and commentator Christian Wolmar has managed to make the transport debate just a little bit more accessible and, dare I say it, intelligent. As transport has become more politicised, it has shifted from being a boorish topic of conversation in pubs into a legitimate field of debate in polite society, and Wolmar’s latest offering ‘Down the Tube’ … should help bring Anoraks in from the cold. Transport, it seems, is now officially mainstream.’
Fabian Review

‘There can be few more sobering or topical Christmas stocking fillers than Down the Tube’,
Alex Warner, Transit

‘This book should be compulsory reading for everyone forced to endure the near-Hades that is the London Underground during rush hour. Following on from Broken Rails, a meticulous account of recent events on the railways, Britain’s most astute transport observer now turns his hand to explaining what has gone wrong with the Tube.’
New Statesman

‘Among the book’s scoops is the revelation that Tony Blair, fearing that the PPP could finally blow up in Labour’s face in the 2001 election, secretly summoned Mr Kiley to Chequers that Easter for the first in a series of four meetings that not even his boss, the mayor, was allowed to know about… In fact, the first contract – to sell the Jubilee, Northern and Piccadilly lines – was only signed on New Year’s Eve with the news buried in true Jo Moore style. Just another minor adjunct to the skullduggery and spinning which the author unveils in a surprisingly pacy 225 pages.’
Matthew Tempest, The Guardian

‘It’s certainly better than ploughing through the 130 volumes of PPP contracts yourself – unless you are one of the City lawyers on £250 an hour, whose bills have thus far cost the taxpayer £400m … This is emphatically not a book aimed at anoraks and trainspotters.’
Matthew Tempest, The Guardian

‘With this and his last book on the catastrophic and lethal privatisation of British Rail, Wolmar has confirmed himself as the foremost expert on British public transport – forelorn, even Pyrrhic, post though that may be.’
Matthew Tempest, The Guardian