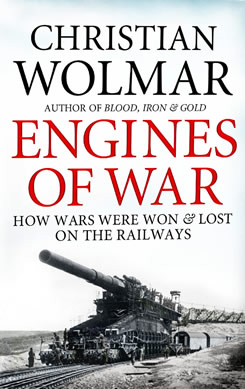 The nature of warfare changed radically in the 19th century. Contrast the Napoleonic Wars, with battles such as Waterloo that were decided in a day, with the prolonged and entrenched conflict that characterised the First World War a century later.

What brought about this remarkable change? The Napoleonic Wars were the last major battles fought before the crucial invention that transformed the very nature of how wars were conducted: the railways. Yet, this aspect of military history has been widely ignored. There has been much focus on how the development of weaponry increased the efficiency of armies as killing machines but little attention has been paid to how the weapons got to the front. And it was the railways which changed the logistics of war.

Napoleon was actually an innovator; he just had the bad luck to be around before the invention of the railways. Unlike many of his successors who led armies in Europe and elsewhere during the railway age, Napoleon would have known how to use them. Napoleon even called the long series of wagons which were used to supply his armies ‘trains’ but despite his awareness of the vital nature of transport in fighting wars, he was restricted by the technology of the day and crucially the appetite of horses which were used not only for cavalry but also transport. Carts pulled by horses could manage barely 25 miles per day and oxen were even slower. If the supplies were too far behind the lines, animal power was useless since the horses would need to eat more than they could transport.

The railways changed that equation. Herman Haupt, the railway genius of the American Civil War, reckoned that a single track line could supply an army of 200,000 men, provided it was operated in a correct way. That meant the railways had to be run by experienced managers who could not be bullied by army officers and had the ultimate say over the timetable. It took a number of wars for that to be understood. Although railways played a role in a number of earlier conflicts such as the Crimean where a specially created railway helped the British and French forces eventually take Sebastopol, the American Civil War was undoubtedly the first ‘railway war’. And that is why it was both long and deadly. Not only did it last four years – between 1861 and 1865 – but the breadth of the conflict which raged over an area the size of Europe its bloodiness. More American soldiers – over 600,000 – died in the war than in all other conflicts in which the US has been involved subsequently. Moreover, during those four long years of carnage, there were no fewer 400 encounters – one every four days – which were serious enough to be recorded as ‘battles’ and it was the mobility afforded by the railways which made such a high level of activity possible. From the first battle to almost the last, the railways were involved. The arrival of troops by rail proved decisive in the earliest big battle, the Battle of Bull Run in Virginia, twenty miles from Washington. The Northerners had the rebel forces on the run until reinforcements arrived by train on the Manassas Gap Rail Road which allowed them to counter attack and give the Southerners victory. Throughout the war massive troop movements across huge distances were made on the railways with the biggest being the 1,200 mile journey by 20.000 men from east to west along the boundary between the rival armies in early autumn 1863. The troops were sent from the Eastern seaboard to reinforce the beleaguered Northern troops at Chattanooga, Tennessee, a vital rail hub, and were vital in stopping the South from taking over the state after an earlier northern defeat.

It was not only troops that were moved by rail, but all the supplies and ammunition essential to maintain the armies. Indeed, in what became known as the Western Theater, west of the Mississippi, battles would not have been possible without the railways since the area was largely uncultivated and troops would not have been able to live off the land. From then until the Korean War, virtually every war involved the heavy use of railways. Battles were fought over railway junctions, the launch of attacks was determined by how quickly men could be mobilised by train and ammunition became ever heavier thanks to the ability of the railways to deliver ever greater quantities.

Railways reached their height of indispensability in the First World War when road transport was still in its infancy. The First World War was, in essence, a railway war and the terrible stalemate of three and a half years on the Western Front was the result of the railways’ ability to deliver vast quantities of supplies to a static front, something that would have been unthinkable in Napoleon’s day.

If there is any doubt that the use of railways war is a neglected subject, I leave the last word to Lloyd George. He noted that the histories of the First World War tended to ignore this aspect of warfare and in 1932, commented on the coverage in John Buchan’s History of the War: ‘The Battle of the Somme has about 60 pages, and yet it did not make that much difference in the war; but the shells and the guns that enabled the army to fight it, all the organisation of transport behind the lines, do you know how much is given to this? 17 lines’.

My book attempts to begin to redress the balance.

My lecture on Engines of War is available at: https://www.youtube.com/watch?v=HwhQEAgWH9I