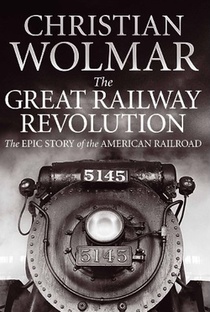 In the 1830s, The United States underwent a second revolution. The opening of the Baltimore & Ohio line, the first American railroad, set in motion a process which, by the end of the century, would enmesh the vast country in a latticework of railroad lines, small-town stations and magisterial termini, built and controlled the biggest corporations in America.

By the middle of the twentieth century, however, as the automobile and the aeroplane came to dominate American journey-making, the historic importance of the railroads began to be erased from America’s hearts and minds. In The Great Railway Revolution, Christian Wolmar tells us the extraordinary one-hundred-and-eighty-year story of the rise, fall and ultimate shattering of the greatest of all American endeavours, of technological triumph and human tragedy, of visionary pioneers and venal and rapacious railway barons. He also argues that while America has largely disowned this heritage, now is the time to celebrate, reclaim and reinstate it.

The growth of the US railroads was much more than just a revolution in mode, speed and convenience. They united the far-flung components of a vast and disparate country and supercharged the economic development that fuelled its rise to world-power status. America was created by its railroads and the massive expansion of trade, industry and freedom of communication that they engendered came to be an integral part of the American dream itself.