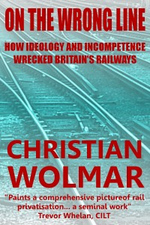 Britain’s rail privatisation has been one of the greatest political failures of recent history. A well-functioning industry was torn apart to satisfy political dogma and privatised in a way that not only compromised safety and wrecked performance but also resulted in financial melt-down.

In his acclaimed book, Broken Rails, Christian Wolmar revealed the causes of the collapse of the railway system, following the Hatfield accident, barely five years after John Major’s ill-thought-out privatisation. Now, in this updated and greatly expanded sequel, he exposes the failure of New Labour to get to grips with the legacy it inherited from the Tories, raising the wider issue of the competence of the Blair government.

Having done very little for its first four years in office, Labour took the gamble of forcing Railtrack into administration and creating a new organisation, Network Rail, out of the ashes. So far this does not seem to have worked. A decade after privatisation the railways receive more taxpayers’ money – over £6bn per year – than ever before. Yet there are still more late trains than in the days of British Rail which, though accused by the government of being inefficient and expensive, provided a better service and more investment on a fifth of today’s subsidies.

Wolmar argues that only a third option will create the railway Britain needs. He makes a persuasive case for a return to a rational railway in which the disparate pieces created by the Tories’ privatisation are reassembled into a functioning network.

This book, with a new preface for the Kindle edition, serves as a valuable reminder of the risks of privatising a single, state-owned service and splitting it into many competing entities, each linked by contracts rather than a shared service ethos. Unfortunately, this lesson does not appear to have been learned by the Coalition Government, which seems dedicated to destroying first the National Health Service the way the Tories wrecked the railways and then doing the same to education.

Finally, in an appendix, this new edition contains a never-before-published three page statement written by Sir John Major on the privatisation of the railways; a subject he never mentions once in his autobiography.

What they said about On the Wrong Line…