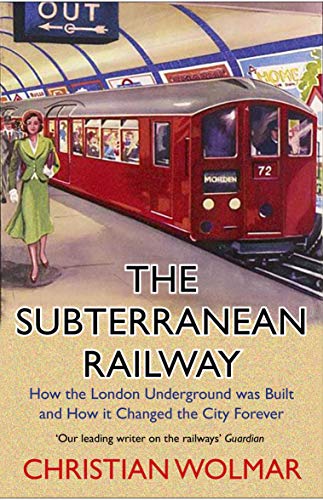 The Subterranean Railway celebrates the fantastic achievement of the Underground’s pioneers who created a transport system that was not only unique in the world but also was vital in creating the London we know today.

While there are many books on the engineering feats of the Underground, little has been written about the effect of the Tube on London. The spectacular task of building a railway underneath a built-up area, a concept so brave was so revolutionary that it took nearly 40 years for any other country to imitate it.

But the achievements of the Underground go way beyond its mere construction. Its role in the development of London and its institutions is probably greater than that of any other invention. Without the Underground London would just not be, well, London. Oddly, that is recognised more often abroad where the famous roundel, the ‘logo’ of the system created long before that word was ever in common parlance, is the emblematic image of the English capital. Here, with Britain’s usual disdain for engineering and our inability to recognise our own achievements, we have tended to ignore the magnificent organism living permanently under our feet.

Most fundamentally, the Underground allows Londoners to traverse the city in a way which would be impossible by any form of surface transport. The Underground is the way to get around town, as demonstrated by the fact that it is both by besuited City gents and their cleaning ladies.

As this book shows, the creation of the Underground stimulated development of the city itself. This is most famously illustrated through the expression Metroland, the area of North West London which was built and indeed marketed as a direct result of rapid access to the centre of London via the Metropolitan Line. Even earlier, right from the start, those who conceived of a railway under London realised that it would create the opportunity to build new developments around stations. More than that, the aim was that the poor would be able to afford decent housing thanks to the cheaper land available outside the centre of London.

The other great impact of the Tube on London is the design and architecture. The purity of the design is encapsulated most famously in Harry Beck’s map of the system, but also given expression in the architecture of numerous stations and the consistency of the use of the typeface, Johnston devised specifically for the Underground. There is barely a streetscape in the centre of the city or in most high streets served by a station which is not recognisably and demonstrably London because of a design feature initiated by London Transport.

Other important achievements of the Underground include the establishment of a brilliant system of transport management which, in the 1930s, became a world class model, envied and studied around the world. Another little told story is how after the war, London Transport changed the demography of the capital by recruiting directly in the Caribbean and Africa for cheap labour to run the Tube and the buses at a time of full employment among the native population. Taken together, it is no exaggeration to say that the Underground helped build the London we know today almost as much as the other way around and this book documents that history in way that has never previously been told.

What they said about Subterranean Railway…