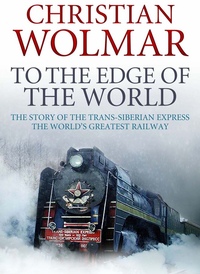 It is the world’s longest railway line. But it is so much more than that, too. The Trans-Siberian stretches nearly 6,000 miles between Moscow and Vladivostok on the Pacific Coast and was the most ambitious railway project in the nineteenth century. A journey on the railway evokes a romantic roam through the Russian steppes, but also reminds travellers of the vastness of our world and hints at the hardships that were endured in its construction.

To the Edge of the World tells the story of the Trans-Siberian railway from its conception and construction under Tsar Alexander III, to the crazy northern extension, the Baikal Amur Mainline, the world’s costliest rail project, ordered by Brezhnev The Transsiberian may have been an overambitious project, but today it is a vital artery for Siberia and its construction changed history. The book also explores the crucial role the line played in both the Russian Civil War -Trotsky famously used an armoured carriage as his command post – and the Second World War, during which the railway saved the country from certain defeat.

Like the author’s previous railway histories, it focuses on the personalities, as well as the political and economic events, that lay behind one of the most extraordinary engineering triumphs of the nineteenth century. For anyone interested in Russian history, or who is planning to travel on the Trans-Siberian, this is an essential read.

Podcast: in conversation with Christian Wolmar

At this rate Christian Wolmar’s books will soon encompass the entire world of railways. They range from the epic story of the building of the American railroads to a detailed, yet highly readable account of the ridiculously abstruse funding formula for the London Underground, which Wolmar, together with about two people in the Treasury, actually understood. His many media outlets have turned him into a kind of transport correspondent to the nation and he mayb ecome more than he succeeds in securing the Labour nomination for the London mayoral election.

If he did become mayor, he would have control of transport in london, although not to the extent that Tsar Alexander III controlled transport in Russia when he decided to build the Trans-Siberian railway. It was an almost unimaginably bold enterprise with Siberia as big as Europe and North America put together, but the Tsar saw it as a way of increasin ghis hold over the country. Begun in 1891 it opened in sages as it progressed from Moscow to Vladivostok and was completed in 1916,long after Alexander’s death in 1894. It is by far the longest railway in the world at 5,750 miles, traversing swamp, permafrost and rivers. In its early days, trains crept along so slowly that one early passenger an American clergyman called Francis Clark, recalled being overtaken by a Siberian cowboy on horseback.

Things speeded up after Tsar Nicholas decreed that the line must enable troops to arrive quickly at any trouble spot. The railway, however, soon created its own trouble spot. The Japanese objected to it straying into what it regarded as its sphere of influence – the Chinese territory of Manchuria – and the Russo-Japanese War of l904 ensued. after it was over, revolution broke out. So much for the railway consolidating the Tsar’s authority. In fact, resentrnent at the vast sums spent on it may have been a contributory cause. During the later civil war, Trotsky and an elite cadre of colleagues in thick overcoats and leather uniforms roved the line in an armoured train. Trotsky ran the war from there and it included a printing press, library, radio station and an electric powerplant Wolmar argues that during II, the line saved Russia from Hitler. Nearly half troops were rapidly shifted from east to west to meet the German invasion. At the same time tank and tractor factories were moved in direction” to continue production away from the front. With characteristic clarity, Wolmar argues that no railway has been so geopolitically important This may be ‘a heavy burden for a humble ironroad’ to carry, but his history makes a convincing case.

The golden spike that marked the completion of America’s Transcontinental Railroad was hammered into Promontory Summit, Utah, in 1869. At that point, the entire Russian empire could boast barely 3,000 miles of rail. A few short lengths of track had been laid in the 1820s, including one that serviced silver mines in the Altai mountains, but the location, on the border with Mongolia and China, was so remote that almost no one knew the things existed. Russia had to wait until the 1870s for its railway boom. It was the great reforming emperor, Alexander II, who finally encouraged a national plan, and by 1900 over 30,000 miles of new rail had been laid.

The focus of this frenzy of construction, however, remained European Russia, itself a vast enough territory for any team of engineers. No business would fund a line to the Pacific; the undertaking was a strategic and military initiative from the first, conceived as a means of integrating the Far East to Russia’s land empire. Like all St. Petersburg’s decisions, too, it took years to settle. Serious progress on the line through Siberia’s inhospitable forest and swamp did not begin until 1891, when reformers in the czarist government prevailed over the conservatives, who considered all change to be abhorrent and all railways politically destabilizing. As it turned out, the latter assumption proved correct.

Christian Wolmar is a fervent railway enthusiast. He is not quite a trainspotter (that phase ended when he discovered girls), but as a journalist he has devoted his career to the campaign for better rail transport. In spare moments, he’s found the time to write at least 11 books, including several histories of epoch-making routes. In view of these credentials, the conclusion he reaches at the end of his latest volume “To the Edge of the World” should probably be trusted. “There can be no other railway,” he writes of the Trans-Siberian, “that has had such a profound influence on the history of not only the nation in which it was built, but that of the world.” The book is all about that history, a narrative that combines the worlds of engineering and politics, geography and war.

Sergei Witte, the man behind the project, is the hero of Mr. Wolmar’s tale. Though he is better-known as a path-breaking minister of finance, Witte began his public-service career in the 1860s as railway ticket clerk in the provincial city of Odessa. Promoted rapidly to management, he was tested by a spell in prison for his part in an accident that claimed dozens of lives. Undaunted and irrepressible, he become the railways’ tireless advocate at court, trouncing and then, in 1892, supplanting the parsimonious finance minister, Ivan Vyshnegradsky.

Railways, for Witte, were more than arteries for trade. The Trans-Siberian was also an extension of national muscle, a guarantor of Russia’s future in the glamorous Pacific world. The line, as he wrote in his memoirs, “not only served the obvious political needs of the state, but also provided a foundation on which to build devotion and respect at home and abroad.” It was this strategic case that won over the Czar of the day, and, given the project’s jaw-dropping costs—a bill for one notably difficult section of track amounted to a seventh of the empire’s annual income—such state support proved indispensible.

Witte may be the book’s human hero, but the other principal character is Siberia itself. Mr. Wolmar does not compete with the likes of Eric Newby (“The Big Red Train Ride,” 1978) and Dervla Murphy, (“Through Siberia By Accident,” from 2005, and “Silverland,” 2006), though he cites them admiringly. But it is difficult to resist the drama of virgin forest and treacherous permafrost as teams of engineers and hapless laborers attempt to build almost 6,000 miles of level, stable tracks. Flooding was a constant danger, and there were so many rivers on some stretches that two bridges had to be built for every mile of rail.

An even more formidable barrier was Lake Baikal, one of the largest freshwater lakes in the world, whose southern shores–nearly 400 miles of them—are edged with precipitous cliffs. The solution, for years, was to take all the passengers and freight off the line at one end and send them across the lake by steamer—at least until the water froze. But swamps, earthquakes and even outbreaks of bubonic plague would all torment the early pioneers; the completion of the line in the early 20th century was a truly epic feat. “It was slow and unreliable,” Mr. Wolmar concludes, “but it could nevertheless lay claim to being the longest and greatest railway ever built.”

War is often called the locomotive of history, but Mr. Wolmar argues that war, to say nothing of revolution, is also driven by real locomotives. The original Trans-Siberian was bound to cause trouble. The Russian government of the 1890s made the extraordinary decision to build part of it across what was then Chinese territory, securing line and stations with military police and shipping Russian citizens to the brand new railway towns to settle in subsidized imperial splendor. The Russian push to the east was a principal cause of the 1904-5 Russo-Japanese war (and thus, indirectly, of the 1905 Russian revolution). The conflict with Japan continued well into World War II; their experience of Stalin’s army in May 1939 may have helped persuade the Japanese to focus on America and Pearl Harbor.

It is harder to blame the Trans-Siberian for events like the Soviet Union’s eventual collapse, though Mr. Wolmar does his best. The culprit here is the Baikal-Amur Railway (BAM), which Mr. Wolmar dubs “the other Trans-Siberian,” a project that so disillusioned those who worked on it that “many turned against the system and become supporters of the opposition to the Communists.” At points like this, where Mr. Wolmar freights his railway with the whole of Russian life, the story rattles over fragile track at breakneck speed, and here and there jumps a rail.

Overall, however, the message of this absorbing book is convincing. Its ecological cost—including permanent damage to the fragile permafrost—may lead some readers to question whether the Trans-Siberian was truly the “best thing that ever happened to Siberia,” as Mr. Wolmar suggests. But he is surely right to say that its creation helped to shape the destiny of Russia and with it, that of Europe and the modern world.

If the world’s railways have a laureate, it is surely Christian Wolmar. Don’t let his keen interest in track, specs, and rolling stock put you off — railroads are not dull. For this seasoned transportation maven and author — he has covered transport for major British newspapers and has written several excellent works of rail history including “Blood, Iron and Gold” — railroads are not only engineering marvels, they are also social and political acts. Nowhere was this more the case than the building of the Trans-Siberian railway, the subject of Wolmar’s excellent new account, ‘To the Edge of the World.’… Wolmar misses no detail as he outlines station design, employment practices, and other aspects of the rail business… You can take the Trans-Siberian today, but be sure to pack Wolmar’s book if you do.

My lecture at Hay festival on the book: