Has our great train network gone off track?

CAPITALIST free market buccaneers of the 19th cen­tury would have blushed at today’s “botched” free-for-all privatisation of the railways.

So writes Christian Wolmar in his superbly researched and powerful book Fire and Steam: A New History of the Railways in Britain.

He suggests that the great land-grabbing railway barons put their money where their mouths were 150 years ago, whereas today our own risk-averse businesses expect the taxpayer to pick up the tab. Wolmar, who lives in Holloway, admits to a long-running love affair with the railways – but this is not a book of nostalgia.

Like many a suitor, he is constantly being disappointed and let down by an industry that refuses to behave responsibly. He is Britain’s foremost railway journalist and commentator and is currently excited about the opening on November 14 of the new cathedral-like St Pancras station, believing it will become one of the great rail wonders of the world.

“It’s a magnificent achievement,” he says.

“At the end of the day it’s what I love about the railways – the ornate stations, lofty viaducts, deep tunnels, and intricate network of lines which has brought about Britain’s industrial revolution and prosperity.”

His book takes us on a spellbinding journey through the history of Britain’s railways, from the navvies who cut through the land to enable a country-wide network to emerge, to the pioneering vision and grit of the Victorian entrepreneurs. It is a story fraught with tragedy and disaster, along with astonishing monumental feats of engineering. He maintains that the railways can never work effectively as a free market business, but need monopoly and regulation. 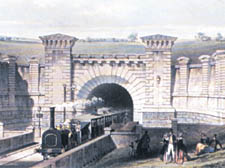 “It didn’t work in the 19th century and they seemed to have forgotten that when they privatised the railways again in 1993-94,” he says.

The story he tells begins with the opening of the pioneering Liverpool & Manchester railway line, in 1830. It was followed by a scramble to build lines the length and breadth of the country. The rise of the steam train allowed goods and people to circulate around Britain as never before, stimulating the growth of towns and industrialisation, as well as day trips and holidays. Then came nationalis­ation under the chequered auspices of British Rail, and finally the Thatcher-inspired privatisation of the late 20th and early 21st century.

The early trains were light and travelled slowly. Accidents became more frequent as the trains speeded up. In 1861, 16 people were killed and 300 injured in an accident at Kentish Town on what is now the North London line. The book contains plenty of characters who helped shape the railways, including many who campaigned for better safety, such as Charles Dickens. The writer was caught up in an accident in Staplehurst, Kent, in June 1865.

“Thanks to him, we also know far more than we would otherwise about the accident, which demonstrated the lack of any but the most rudimentary safety devices,” Wolmar writes.

He adds that the accident highlighted the way that one simple mistake could lead to disaster if there was no back-up system – now a characteristic of the safety systems of all public transport. In this case mainten­ance men had been replacing timber on the line and had to stop, the job half complete, when the train approached at 50mph. They had no warning systems nor time to alert the train. Carriages ran off the line and down into a stream.

The first two were caused by trains going through signals at danger, the others by poor track maintenance, according to Wolmar.

He writes: “The new post-privatisation structure of the industry was responsible in some measure for all these accidents and, crucially, the public’s confidence in the railways was dented, even though statistically this was one of its safest periods.”

Another big problem was rocketing costs of the railways to taxpayers, particularly when compared with British Rail.

“The biggest irony,” says Wolmar, “and indeed the failure of privatisation, was that far from reducing the cost of the railway to taxpayers, it soared to unprecedented heights.”

Today, the industry is fragmented into ownership by more than 100 companies. Each needs to make a profit and has complex contractual and legal relationships with the other companies. The ability to control expenditure has been lost. “Decisions, often incompatible, are made by various stakeholders, none of which has the overall interests of the railway in mind,” Wolmar writes. Another example is the fact that train companies are paid millions of pounds annually in compensation because Network Rail closes a line for track repairs or for other improvements. In other words, the operators receive money for not running trains.

“The great railway barons of the 19th century would have never tolerated exercising so little control,” Wolmar writes. “They were genuine risk-taking capitalists.” Peter Gruner