Among many other things, the Civil War marked the first significant use of the railroad as a military tool. Between the opening of the first European and American railroads in 1830 and the outbreak of the war in 1861, there had been a few short wars in which railways had played a supporting role in moving troops and supplying armies with ammunition. Never before, however, did it play such a central role in the strategic and tactical planning of both sides.

Troop and supply movement over hundreds of miles was now a question of hours or days, not weeks. Most of the major battles during Civil War were fought around key railway centers, including Chattanooga, Atlanta and Nashville. The location of many other battles was determined by their proximity to a railway line. And the railroads themselves became significant targets, as lines were torn up and destroyed by both sides to restrict their enemy’s mobility, only to be rebuilt at great pace and with enormous skill once local territorial dominance had been achieved.

The two sides started with very different railway networks. By 1861, just three decades since the opening of the country’s first railway, the Baltimore & Ohio, America had 30,000 miles of rail. Roughly two-thirds of it were in the North, leaving just 9,000 miles in what became the Confederacy. Moreover, the Northern lines were far better developed, with more advanced and reliable locomotives, rolling stock and track. Most of the South’s railroads were local, ramshackle affairs that did not cross state boundaries; co-ordinating the system was made more difficult by differences in gauge. This superiority of the North’s railroads would prove crucial in helping the Yankee victory. 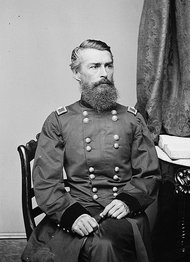 The North was also quicker to realize the importance of controlling the railroads, which at the time were all in private hands. Congress federalized all railroads in January 1862 and appointed an experienced railwayman, Daniel McCallum, as military director and superintendent of the railways with total power over them.

By contrast, in the South, the different railroad companies, having promised full co-operation and support for the war, soon started to squabble with the government over payments for the carriage of soldiers and prioritization of military convoys. The administration of Jefferson Davis never managed to impose itself on the railroad companies, partly because of the power of the states relative to the government in Richmond, informed by the ideology which had led them to break away in the first place. Although the Southern government created a Railroad Bureau, it was never able to exert the same power as McCallum over the frequently obstructionist railways, which were often more interested in short-term profit than the long-term prospect of military victory.

Nevertheless, the South scored a notable early military triumph: at the First Battle of Bull Run,, the turning point came when the Confederates, who seemed near the brink of defeat, managed to use the local Manassas Gap railroad to quickly bring in reinforcements from the northwest and launch a successful counter attack.

The South followed up its success at Bull Run with several other rail-based victories. But the battle, and in particular the use of rail, had shocked the North out of its complacency. Ironically, it was the North that seemed to take the lessons of Bull Run to heart and to develop more refined tactics. The first step was to appoint Herman Haupt, a famed veteran rail engineer, as McCallum’s deputy. Haupt quickly became known as “the war’s wizard of railroading” for his skill in building and destroying railways with great speed, and at making best use of their capability. His most famous exploit was to rebuild a 400-foot bridge over the Potomac, destroyed by the Confederates, in just nine days using locally sourced wood and a largely unskilled workforce. After inspecting the achievement, President Lincoln said, “I have seen the most remarkable structure that human eyes ever rested upon.” 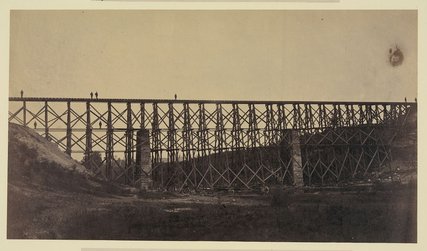 More important was Haupt’s role as a tactician. He devised simple rules for using the railway in war, insisting, for example, that all wagons be emptied as quickly as possible and removed from the railhead so that they did not clog the unloading station and could be readily reused. It was a simple rule but one which the army, focussed on purely military objectives, was wont to forget. Indeed, Haupt’s most fundamental rule was that railway personnel should be in charge of train movements, deciding on the timetable, rather than military officers, who would not understand the workings and limitations of the railway. Railways needed military discipline, but not the discipline of the military. In future wars, many generals paid a heavy price for ignoring these simple rules.

The war ended with General Sherman’s great sweep south, and here too the railways were crucial. His army was supplied entirely by a single railway route, a combination of three lines stretching almost 500 miles from Louisville to Atlanta. Ever meticulous, in his memoirs Sherman paid tribute to this logistical miracle: “That single stem of railroad supplied an army of 100,000 men and 32,000 horses for the period of 196 days between May 1 and November 19 1864.” To have delivered these supplies by road would have required 36,800 wagons, each with six mules — a logistical impossibility. Interestingly, once he had destroyed Atlanta and headed east, Sherman destroyed the railways behind him to ensure that the Confederates could not use it to pursue him.

Indeed, the length of the war, the number of battles — 400, or more than one every four days — and the breadth of the conflict, over an area the size of Western Europe, were all the result of the ability of the railways to supply troops with both food and ammunition in an unprecedented way. The very bloodiness and intensity of the Civil War was a result of the invention of the railroad. Before the railways, battles were over in a day or so because of the inability to keep armies and their horses supplied by road. Now, battles could continue, in theory, indefinitely. A new way of war, borne by the iron horse, had arrived.