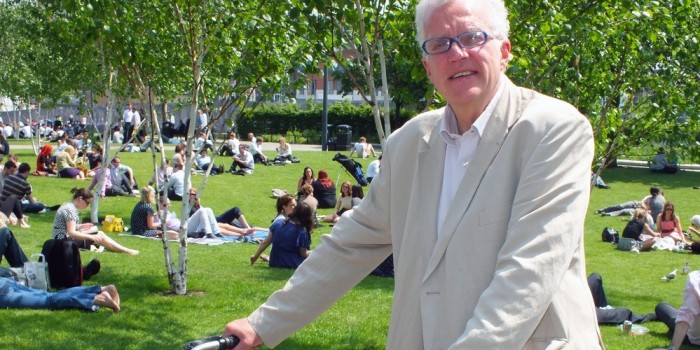 Jogging through Tufnell Park this morning, I was struck by the stream of cyclists along Dalmeny Road, a short cut that takes out much of Holloway and Camden roads for people heading into town. There was never a moment when there were not several cyclists in view and they were a mixed bunch. The Lycra speedsters were very much a minority with lots of smartly dressed women and middle aged blokes wearing ridiculous shorts over tights. There was, too, a woman in a ra-ra skirt chatting to her child on a seat in front of her, and a muslim woman in a headscarf who reminded me of that wonderful film about a girl in Saudi Arabia longing to own a bike.

I used to cycle to work along Dalmeny Road some 20 years ago when I worked at The Independent and it was a lonely chore. It was rare to meet a fellow cyclist and the idea that there would soon be a stream of people on bikes every morning would have seemed fanciful. This change has not come about by accident. It has happened because of various decisions by politicians over the years – like the creation of the patchy but at times effective London Cycle Network by Ken Livingstone, of the introduction of a 20 mph zone in Islington and road humps along Tufnell Park Road which used to be a dangerous race track, of the erection of barriers in residential streets to stop rat running, of the provision of cycle parking and so on.

Many of these changes will have been fiercely opposed at the time. Some proposed changes that might have made things better will even have been thrown out. However, this collection of measures, even if they are at times half-hearted, has had a remarkable effect. Cycling is now a key part of the city’s transport system. Therefore, you, as mayoral candidates and local politicians have to be brave. Asking people if they want a cycle route through their street and therefore it may take a bit longer to get out to the main road or whatever is not the right question. The right question is do you want your kids to be able to cycle to school, do you want cleaner air, do you want to encourage people to be more active by cycling and reduce the burden on the NHS and so on? Just because a few people might have a small amount of inconvenience is not a reason to stop schemes from happening.

This is about leadership, about knowing what you want and working to implement it. It is not about asking focus groups what they think and trying slavishly to appeal to them. Of course politicians have to listen, but they also have to know what they want and to show that they are prepared to take risks to get there.

Dalmeny Road is by no means unique. What has happened with cycling in London is transformational. The culture of the city is changing towards a more sustainable and, dare I say it, a happier way of life. It is not just about cyclists, either. Roads that are better for bikes are better for people, too. There is no middle way, here. You are either on board for this transformation, or you are not. You either get it or don’t. The question is, do you want to be on the wrong side of history?