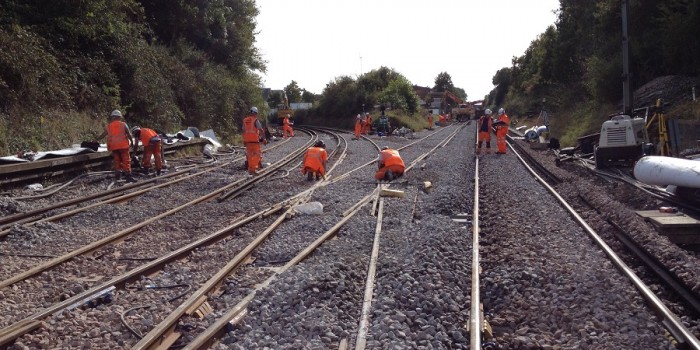 Railways are all the rage. Passenger numbers are at their highest level since the 1920s and there is no sign that recent growth, which has seen total annual number of journeys double over the past 20 years, is slowing. There is a real commitment among politicians to rail, as demonstrated by the all-party support for the new high-speed line linking London with Birmingham, Manchester and Leeds.

But it is not all plain sailing for the HS2 project. The cabinet secretary, Jeremy Heywood, is reviewing the project, reigniting doubts about whether spending £55bn on one scheme aimed mainly at business travellers in a hurry is the best strategy. There is an alternative. Around the country, dozens of campaign groups are pressing for the reopening of lines closed in the 1960s by the then chairman of British Railways, Richard Beeching.

In the past many of these activists were dismissed as puffer nutters who had dined out too often on The Titfield Thunderbolt, the 1953 film about villagers trying to save their local line. However, several recent successes have shown that the campaigners’ arguments are not just fantasy. There is a stronger case for many of their projects than for the attention-grabbing, big-bucks HS2.

Small schemes often give a better benefit-cost ratio than HS2, according to the “business case” on which projects are assessed by the Department for Transport. The high-speed line has struggled to meet the 2:1 ratio considered enough for such large expenditure. HS2 has reached that level only thanks to a fundamental flaw in the way projects are assessed.

Most of the benefits are through small time savings made by travellers. Consequently the very speed of HS2, expected to run at 350kph, has brought it up to the required ratio. However, smaller schemes deliver benefits – such as encouraging housing developments and economic regeneration – that are more difficult to quantify, and which therefore do not show up so well in the methodology.

Railfuture, the campaign group that fights for rail expansion, reckons that in the half-century since the Beeching cuts, 370 stations and 500 miles of railway have been reopened. Many of these are now vital parts of the rail network, used by hundreds of thousands of passengers annually, raising the question of why they were ever closed in the first place. The most unlikely recent addition was also the longest: the 30-mile Borders Railway linking Edinburgh with Galashiels and Tweedbank in the down-at-heel and sparsely populated Midlothian region, which reopened last September.There are many other schemes that could do the same work of regeneration for an outlay of a few millions

Passenger numbers have exceeded expectations, with more than double the predicted number in the first few months, and there are now demands for increased services and longer trains on the line. The reopening has given the local area a huge boost, with visitor attractions such as the local mining museum and hotels reporting increased demand. In the towns served by the railway, more than 3,700 homes are planned. In Galashiels, the £5m Transport Interchange building opposite the station, which provides space for small businesses, opened as a direct result of the railway’s reinstatement.

The Borders Railway reopening cost £353m, and the scheme was roundly criticised by opponents such as the Institute of Economic Affairs – which called it insane, saying that road schemes often had a higher benefit-cost ratio (5:1 or more). But again this is a feature of the methodology that favours time savings for drivers getting slightly faster to their destination, rather than wider considerations such as job creation, regeneration and access-to-work opportunities for people without cars.

The Borders Railway was considered such an unpromising project that even supporters of reopenings suggested there were more deserving lines for which to campaign. Its success suggests there are probably many other schemes that could do the same work of regeneration for an outlay of a few millions or tens of millions – rather than the billions demanded by high-profile projects.

Urban areas can profit too. The London Overground line between Islington and West Croydon, which made use of underused and closed lines, has been such a success that the four-car trains first introduced in 2009 have already been extended to five, and a further extension to six is now being mooted.

More importantly, the line has stimulated the regeneration of a swath of east London previously poorly served by public transport. It has shown that providing good quality, frequent and safe transport – all stations are staffed throughout operating hours – can transform even the most rundown area.

Other schemes waiting for seed funding and support from central government include the March-Wisbech line in Cambridgeshire: the road between Wisbech and Cambridge is slow and congested. The cost is estimated at around £70m-100m and, while there is widespread support, the process is beset by bureaucratic obstacles, despite the growing pressures of an economically successful area.

In London, Hounslow council is eager to provide better transport for the Brentford area around the A4 Great West Road, which has many thriving businesses – including Sky TV’s various subsidiaries, which employ 6,000 people. But the public transport links are poor. The roads are in a constant state of gridlock. The council has supported the idea of using a local freight line to provide a rail shuttle at a cost of £40m, but is finding it difficult to raise the money. Local councillors are worried that without such a link, the potential for creating more local jobs will be lost.

Even using the flawed Department for Transport “business case”, these projects often come out better than HS2, with a typical benefit-cost ratio of 3:1 or more. Of course, no one is going to argue for reinstating the patchwork of lines that once existed north of Aberdeen, or suggest that we will ever regain the size of the network before Beeching wielded his axe. Many of those were built by 19th-century private train companies to keep rivals off their turf, or to serve a long-defunct local industry.

But the campaigners’ efforts highlight the fact that there is no one in Whitehall or in the train companies looking at a map of Britain and assessing which parts are badly served and could benefit from a reinstated rail line or a small stretch of new track. There is, in short, no coherent transport policy, but instead a patchwork response to whatever schemes are put forward by rail enthusiasts or local authorities.

The HS2 project did not emerge from an analysis of Britain’s overall transport needs, but rather is premised on vague ideas such as reducing demand for air travel and tackling the north-south divide, neither of which stands up well to detailed scrutiny. In contrast, many smaller projects are based on very clear assessments of local economic circumstances. Yet there is no government body to push for these small schemes – or indeed any organisation at all that is looking systematically at improving and extending the rail network.

Politicians love megaprojects. However, a more intelligent and rigorous method of assessing projects would lead to smaller schemes being prioritised. It would show that, when it comes to railways, small can also be beautiful.