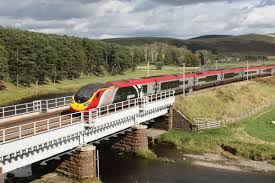 The future of franchising is in doubt following the departure of National Express, which once ran nine contracts, from the rail industry. This high profile departure has highlighted a number of problems for the franchising process which is beset by a paucity of bidders and a lack of clarity about the precise purpose of the system.

While British companies are leaving the industry, foreign based businesses are taking over. The entry of the Italian state-owned Trenitalia, which has taken over the C2C franchise from National Express means that four European state railways are now involved in running UK railways as it joins Arriva (owned by Deutsche Bahn),  Govia (35 per cent owned by Keolis which in turn is 70 per cent owned by SNCF) and Abellio (owned by Dutch state railways. Even the Japanese have joined in as the huge private Mitsui company has just taken a 40 per cent stake in the new Abellio Greater Anglia franchise.

This foreign takeover is becoming increasingly embarrassing to the Department for Transport in the light of the Brexit vote especially since a British government company would not be able to take on a franchise. There is also the further nonsense that Chris Grayling has refused to hand over any more routes to Transport for London as franchisor even though its London Overground services have been universally recognised as a great success,

Indeed, devolution throws a further spanner in the works. David Cameron’s government seemed keener on the idea of devolving power away from Westminster than Theresa May has been silent on the issue. However, any attempt to pass on franchising powers to regional government is bound to be fraught with difficulties over who precisely should be given responsibility. Rail North, for example, was originally envisaged to have a measure of control over the Northern and TransPennine Express franchise, seems to have been largely sidelined, having only had a consultative role. Its website has no entry since April 2016!

The Southern debacle only adds to the uncertainty over the future of franchising. In fact the huge Thameslink, Southern and Great Northern deal was a management contract, which means Govia, the company running it does not take the revenue risk. This was a sensible arrangement given that the deal encompassed a time of great uncertainty with the redevelopment of London Bridge station and the upgrading of Thameslink services, including the introduction of new rolling stock. It also meant that it is the Department, not Govia, which has lost out as a result of the disruption caused by drivers and guards on Southern services.

The real crisis is the shortage of bidders. In several recent competitions, there has been a short list of just two, instead of the normal four. Moreover, because of the lack of capacity in the cuts-hit Department for Transport, extensions without any competition are being handed out to incumbents, simply because there is not enough expertise in Marsham Street to process more than two or three deals in a year.

The loss of National Express, which is not going to bid for any new deals in the near future, highlights the depth of the crisis. Its departure, with the sale of C2C to Trenitalia, was motivated by the company’s assessment that there was no money to be made in them thar hills any more. National Express felt that their rivals were putting in impossible bids which made no financial sense and that the Department was ready to accept them, even if there was a risk that the deals would collapse. The company pointed to the Greater Anglia franchise where, despite putting a bid that its boss, Dean Finch, thought was optimistic, it was outbid by 40 per cent by Abellio.

This suggests that in future the only bidders likely to win contracts will be those backed by state run enterprise. While FirstGroup, Stagecoach and Virgin remain in the industry, it will only take for another franchise or two to go wrong for them to decide, like National Express, that it is not worth the candle.  The complexity and cost of bidding is another deterrent. Bids now cost up to £10m as the paperwork and the detail required have increased exponentially.

So as I have often asked, ‘What is franchising for? ‘. And equally pertinently, where is it going? Chris Grayling, the transport secretary clearly does not like the present structure and has intimated that he would like to see vertically integrated deals, with parts of Network Rail being parcelled out to operators, but that would require a change in legislation which is not likely to be forthcoming given other imperatives for Parliament.

The Labour party’s policy is to renationalise the railways, but that is not likely to happen in the near future either. Labour has little chance of winning the next election, whether that is this year or, more likely at the scheduled time of 2020. Renationalisation is also more difficult than Labour leader Jeremy Corbyn has intimated since, even if Labour won, the new government would have to wait for existing deals to run their course since trying to end the franchises would be a costly exercise. Therefore it would not be until probably the late 2020s that Labour would be able to gain control of the whole industry.

In the absence of any radical solution, there is only one option for the Department which is to muddle through. As different franchises come up, the civil servants running the show will look for bespoke solutions in the hope that deals can still be signed. However, it may be that as bidders are deterred from coming forward, the Department may be forced into radical solutions such as, perhaps, running services temporarily through their operator of last resort, as happened with East Coast when National Express threw in the towel. That would be a kind of backdoor privatisation which would cause much mirth in the Labour party which certainly could do with the odd smile at present.