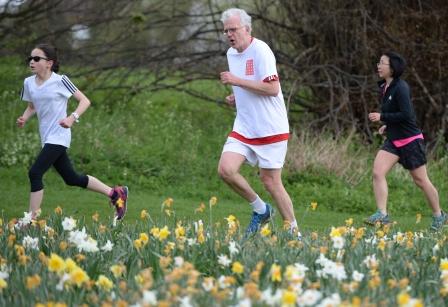 Just occasionally new technology blends in perfectly with community spirit to create a great new concept.  That’s how Parkrun was born. It is, basically, a run in the park, but with a difference. It is a 5k race – though the organisers hate you calling it that – which happens at nearly 450 locations at 9am on Saturday mornings.

I have a confession. I am a Parkrun addict. I have run precisely 87 of them on courses as far ranging as Derby, Milton Keynes and Tewkesbury as well as in several places in London where I live. There are, in fact, 47 Parkruns across London which is the birthplace of the idea. It was conceived by Paul Sinton-Hewitt, who has earned a CBE for his efforts and the original run, in Bushy Park now regularly attracts 800 runners.

It works like this: volunteers act as marshals and timekeepers, and runners have to print off a free barcode from the Parkrun website. They can then turn up to any run and at the finish they are given a little tag with another barcode and both are scanned in by volunteers. The big advantages are that it is not necessary to book in advance and the races are always held at the same venues every week, come rain or shine.

There is, I accept, an obsessive characteristic to Parkruns, stimulated by the fact that your result comes through within a couple of hours by email with a wealth of statistics which ensures that the time you achieved on a wet Saturday in February 2009 will be recorded for ever more, or at least, as long as there is an internet.  The result is sent through by email and text.

Parkruns do attract nerdiness.. I dwell over the fact that I have run exactly the same speed two weeks running, or wonder why I was a minute slower than the previous one. Or whether the course at Highbury Fields is slower or faster than the one on Hampstead Heath. And was I the fastest bloke in the 65-69 category this week? Oh, and the best of all, is that when you have a certain number of runs, you get a free T shirt – red for 50, cool black for 100 and purple for 250

Then there is the age related score. This is undoubtedly the highlight since it means you can actually beat that 20 year old who lapped you twice, at least on paper. The age related score is a percentage based on the record for 5k at your particular age and gender. The higher the score, the  better, but the key bit of fun is that you can compare yours with other much younger runners.

I must confess that though the events are fun and friendly, they are hard. Somehow, because there are so many people and your time is being recorded, it is impossible to jog slowly through them. You just feel compelled to catch that old bugger ahead of you, or to show that youngster a clean pair of heels. It is slightly humiliating to be overtaken by people pushing buggies, even though they are 35 years younger than you. I pretty much hate every minute of it. I do long for the finish line but then so, I’m sure, does Mo Farah. And it is the opposite of a drug. Taking drugs makes you feel great for a few moments and awful for a long time afterwards. Running makes you feel awful while you are doing it but for the rest of the day I am on a high. A legal one.

Surely though, I can hear Oldie readers wail, this is nothing to do with us. Running 5k when you are in middle or late age is bonkers. Well, not really though don’t try it if you have not put on a pair of running shoes for decades.  However, it is perfectly possible for many people of a certain age – I am 67 – and the only person you are really running against is yourself – in theory at least, as it is tempting to overtake those stragglers near the finish line. And as I get older, the number of competitors in my age group diminishes and now I regularly come first – and simultaneously last –  in my age group.  So give it a try.