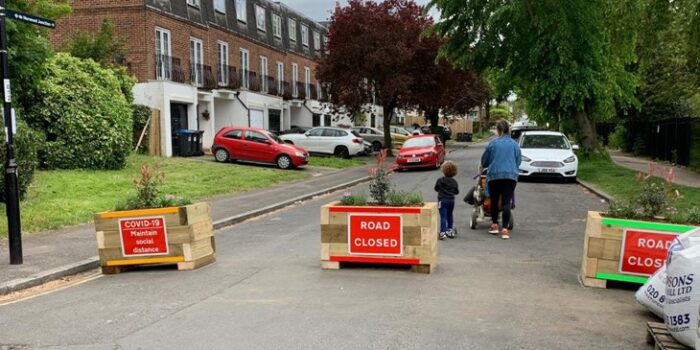 It has become the biggest transport controversy of the century. Not rail nationalisation, not the £27bn roads programme, not even the £100bn on HS2, but the humble ‘low traffic neighbourhood’. Or LTNs, as they are known in the jargon that was previously only used by highway engineers and cycle campaigners.

The fundamental idea is simple. By cutting off through traffic in minor residential roads, local residents will enjoy a quieter environment, less pollution, reduced danger from traffic and be more likely to walk or cycle. The road system will be filtered so that cyclists and pedestrians can get through the barriers but cars and vans cannot.

This has implications far beyond transport. Having less traffic going past your door makes life better in lots of ways, from improving sleep to making for a more friendly neighbourhood. Research in the 1970s in San Francisco revealed that there was a strong correlation between the busyness of a street and loneliness. People on quieter streets were far more likely to know their neighbours than those on busy ones.

What is there not to like? Creating LTNs does mean that some people, including some who do not benefit from quieter streets, may have a longer journey when travelling out of the area. In general, streets will be blocked off in such a way that they will be forced to access the outside world via one main road. And therein lies the problem.

There is no doubt that some car users will be inconvenienced. And boy do they make a fuss, soften out of all proportion to the inconvenience caused. Certain tropes recur, such as ambulances not being able to get through, massive congestion on neighbouring roads and people not being able to get to work. In Ealing, a tree fell down on a road affected by a temporary LTN and that somehow was blamed on its introduction.

One complaint used by some Labour opponents is that poorer people tend to live on the main roads that will see increases in traffic. This does not stand up to serious scrutiny. There is no evidence that schemes benefit more affluent people over poorer ones. Quite the opposite, since higher car ownership is greatly correlated with income.

While undoubtedly some mistakes have been made with the rapid introduction of these schemes – some 160 in London alone and numerous others in big cities such as Newcastle, Manchester and Birmingham – many of the most vociferous complaints come from well-organised groups such as taxi drivers. Petitions have often been circulated and attract large numbers, but this does not mean they are representative of local residents. Often the complaint is that there has been no or little consultation, but that is because these measures were taken in the face of the Covid outbreak, and this can now be rectified.

In the face of opposition – often vociferous – some local authorities such as Brighton and Redbridge have retreated, saying they are ‘listening to people’. However, they may be listening to a lot of ill-informed noise from outsiders while ignoring the voice of residents who have benefited. Winning people over can be achieved through good communication, on the ground work and a readiness to make amendments and remedy mistakes.

Ultimately the controversy arises because there is a dual purpose behind the LTNs. The most obvious is to improve the environment and air quality of residents on the closed-off streets – and by-and-large, that is universally acceptable. It is the other, more radical, aspect, which is to make car use more difficult and nudge people into using other modes, that engenders much of the opposition.

LTNs have been around for years, and there are some great success stories. Probably the best is Waltham Forest, where a series of LTNs were created with funding support from the mayor of London. The early schemes have been so successful that parts of the borough where opposition was greatest are now seeking to have LTNs. For councils and councillors implementing these schemes, there are several important things to remember:

Residents in Railton Road in Brixton, South London, decided to reinforce the efforts of the local Lambeth Council with a series of activities in this presentation. The crowding on the main roads can mostly be attribute to the shift away from public transport in over concerns about Covid risks.

Christian Wolmar was a founder of Labour Cycles, which can provide speakers to any Labour branches or groups to discuss these issues. Do contact us, too, if you are willing to help with the campaign. Contact christian.wolmar@gmail.com or go to labourcycles.org.