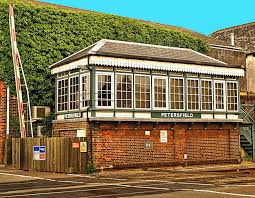 Petersfield signal box is in the wrong place. Or at least it is now. Actually, when it was built in the 1880s, it was precisely in the right place, near the tracks and next to the level crossing which the signalman controlled. It had to be. Signal boxes had a series of big levers which controlled both signals and the points on the track. The boxes had to be as near as possible to equipment they controlled or otherwise shifting the levers just became too difficult, especially in cold weather, in the days before electric motors were introduced to facilitate movement.

Petersfield  is Grade II listed because it is a rare example of a box containing equipment developed by the London & South Western Railway which built most of the lines out of Waterloo. It now faces demolition as Network Rail is decommissioning the box and wants to improve the level crossing next to it.

In the early days of the railway, ‘policemen’ had to stand next to the points to change them and soon were provided with little huts for shelter. Then, as trackwork became more complex, several points were controlled from one location and the signal box was born.

The signal box was often the local hub of the railway, often busier than the local station as the P-Way men (the trackworkers), the signalmen and various local people –  a mix of the enthusiast and the nosy, often school children – would pop in for a chat and a cup of tea from the kettle that was always kept near to boiling on the hotplate.

Keeping the box tidy and cosy was a source of great pride for the signalmen who often spent long lonely shifts at night ensuring the smooth passage, and, above all, safety of the trains they controlled. The signalmen made key decisions about which trains to prioritise and woe betide the one who delayed the express to allow through the milk train.

Adrian Vaughan wrote in his account of working in eight different boxes, Signalman’s Nightmare, how, even in the middle of the night, how his box at Challow, in Oxfordshire, ‘looked splendid …when the red, blue, black and yellow levers with their long, brass badges and burnished steel handles flashed like a full-dress military parade under the stark light of three electric bulbs’.  As the title of his book implies, Vaughan was ever worried about safety and rightly so. Britain’s worst rail accident, Quintinshill, in 1915 which killed 226 people, was caused by a signalman forgetting he had routed a slow train on the path of an express.

At the time of rail nationalisation in 1948, there were more than 10,000 boxes across the network but gradually many were closed as their intricate hand-operated mechanisms were replaced by remotely operated electrics.

There are still some 700 boxes and there is hope that not all will disappear in the sweep of modernisation. Network Rail had originally wanted to control all the signals on the network from a dozen large control centres, but now, I’m told, the state-owned company no longer has a programme to close them all but rather is leaving such decisions to regional managers. And severl unused boxes have found a new life. The Railway Heritage Trust provides grants to pay for the maintenance and upkeep of listed signal boxes and some have even been moved, with all their levers intact, to heritage railways where enthusiasts can play at being signallers all day long. The Petersfield signal box may survive but ultimately not in Petersfield itself.