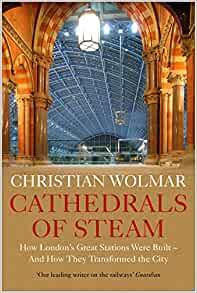 I began this book waiting for a diesel train to Derby, under the windy, boxy, flat-roofed bit which one of Sir Norman Foster’s team added to the back end of St Pancras station. At around 7 p.m. on a weekday only a dozen or so people were travelling. In the arcade below — built by the proud Midland Railway, as Christian Wolmar reminds us, to the dimensions of the Burton beer barrels the space was designed to store — shops are being boarded up. No one buys a new wheelie case or jewellery before catching a Eurostar to Paris anymore.

Among the many entertaining facts he has assembled, Wolmar calculates that London has 598 railway stations. There are mornings now when it feels as though that is greater than the number of peak-hour passengers across the city. These are bad days for our railways, and the shock is all the greater because they come after some of the best.

Just before coronavirus, the city’s stations were busier than ever, cleaner than ever and from London Bridge to St Pancras via Liverpool Street and King’s Cross, more beautiful and pleasant to spend time in than ever. I remember when the only diversion St Pancras had to offer was British Rail’s Shires Bar, all 1970s beige and brown with a stained carpet. Now the pub has become the glossy Sir John Betjeman, with an outdoor terrace where you can still (as I write) meet friends without breaking the law and look up at St Pancras’s wonderful clock tower and its rival ticking above King’s Cross.

Wolmar is one of the crotchety sort of railway lovers for whom nothing is quite as good as it used to be and the system is now run by idiots; but even he has to admit that the past had its problems. London’s stations were never really cathedrals of steam — his title is a misleading way to describe the shabby, confusing, soot-ridden structures from which most people had to travel — but they made the city what it is through the accident of chaotic competition.

State planning elsewhere in Europe often drew things together with a single central station — the finest of all is that monument to Prussian imperial power, Leipzig Hauptbahnhof. Even Paris, which almost matches London for termini, thought about what it was doing and linked them together with the Petite Ceinture, along which British passengers on sleeping cars from Calais were hauled to join the Train Bleu down to Nice.

In London, by contrast, companies fought to build what they could. That’s why the city ended up with so many stations —why the Great Western Railway, which almost touches the West Coast route from the north and should have gone to Euston, built Paddington where it is; why Victoria still has a wall down the middle between two rival routes; why Cannon Street exists at all; why some people had to spend their lives commuting to horrible little rat-traps such as Holborn Viaduct (a station whose end not even Wolmar can mourn).

To Wolmar all this competition is an affront to the sort of ordered, socialist society he would like us to live in. He makes a fair point about the massive destruction the building of so many lines caused. Tens of thousands of people lost their homes. ‘The first shock of a great earthquake had… rent the whose neighbourhood to its centre,’ Charles Dickens wrote in Dombey and Son, describing the construction of the line to Euston — a shock now being matched by the building of HS2 next to it.

But without this chaos and profit-seeking London would not be what it is today: dinky Fenchurch Street, hidden away; Charing Cross, where for some reason black cabs still gather like nowhere else. Cheap fares on the nasty, smoky Great Eastern brought workers from cramped housing in the east and north-east to the city. Today the fares are higher and the smoke has gone, but Liverpool Street still — in normal times — paces to the march of commuters. The glamorous Great Western into Paddington was the last place in London to be served by a dining car. Lunch on the way to Plymouth has been another Covid casualty.

Almost all these random lines turned out to be useful, which is why so few of them have closed. Wolmar, a natural nostalgist, is good on one that didn’t last: Broad Street, the origin of the dirty old electric trains which once took me to school. British Rail was right to knock it down and sell the land. But it is hard, even in the present crisis, to imagine any more of London’s stations being lost. Commuting may change. Crossrail will eventually open. Moaning northern mayors complain that London is over-indulged with infrastructure. But our capital will still be made by its stations.