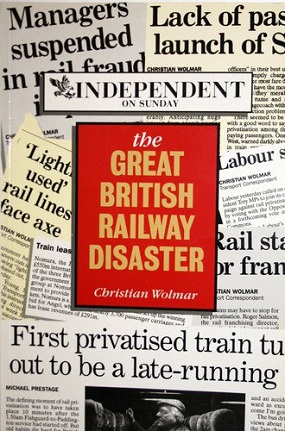 Rail privatisation broke up British Rail into 100 component parts – and in the process created a whole series of anomalies that confused and irritated passengers. This book, written at the beginning of the privatisation process, is a series of amusing incidents which arose because of the way that the railways were fragmented. Why, for instance, were travellers finding connecting trains on branch lines long gone when the main line service was later, when previously they had waited? Why were some people paying more for the same journey because they bought their ticket from a machine rather than a ticket office? And why had stations suddenly gone ex-directory?

This book is a collection of stories taken from the ‘Mad’ column, written by Christian Wolmar, which ran every week in the Independent on Sunday for two years. There are a host of great tales, ranging from why a fire was left to on a platform because the equipment to douse it belonged to Railtrack and not the train operator, to why broken down trains were taking much longer to rescue because if the nearest locomotive belonged to a different company, it would frequently not be used. It is not surprising this book has a large following amongst those interested in the industry.

What they said about The Great British Railway Disaster…

‘Britain was rather quick with railway privatision. Rail experts predicted problems, and here they are: The Independent on Sunday ran a regular column on all those catastrophes that have struck the nation’s rails since. This book has collected them, and they make excellent reading. My reactions varied from hilarious laughter over outright astonishment to just plain rage and anger. I learned how to ruin a working concern, and, as I live in Germany, I found out what we can expect, here. Deserves a huge readership.’
Heik Oahlers, reader from Oldenburg, Germany

‘I have never read the Independent newspaper but must have read this book at least three times… The book gives 64 really funny stories of how crazy the new world of rail privisation is. The stories are unbelievable but true and anyone who is supporting rail privisation should read this to find out why so many are against. If you want a laugh at a good price, get this book now!’
Anonymous reader