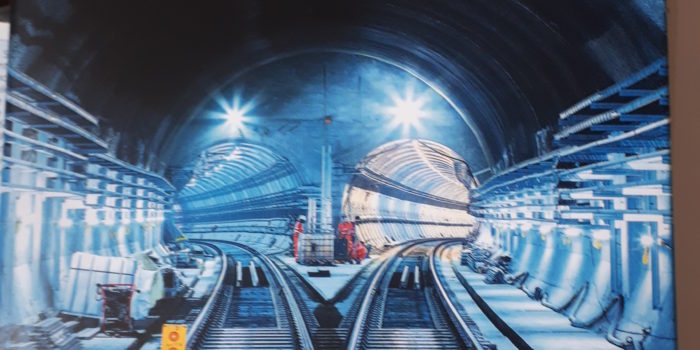 This book celebrates a triumph. The UK’s vast Crossrail project, managed by Transport for London, the mayor’s transport organisation, has successfully excavated a pair of tunnels through 21km of central London. Ten new stations, likely to be among the city’s most spectacular and efficient, have been built. By letting commuter services from Heathrow airport and Reading in the west run through central London to Shenfield in Essex and Abbey Wood in south-east London, Crossrail should transform the region’s commuter rail. That it describes a triumph is the book’s big problem. As a proponent of the renationalisation of UK train operators, and a persistent critic of nearly every aspect of private sector involvement in transport, Christian Wolmar is telling the tale of a project governed almost exactly the way he advocates. The story is one of how wise managers have sagely foreseen potential mishaps and, by prudent planning, averted them. Edge-of-the-seat suspense is the price he pays. Recent events have not flattered this view. Passengers were due to start using Crossrail’s central tunnels by December. But, in August, Crossrail postponed the start of service until autumn 2019 — a timetable that, by its imprecision, raises suspicions that further slippage awaits. There is a great cliffhanger in this story. How will the project’s cost compare with the £15.9bn budgeted when tunnelling started in 2012? When will it open? Will the challenges of operating the new railway be met? Unfortunately, the book ends with the protagonist still dangling by his fingertips, uncertain whether he will survive or plummet to his doom. Yet big infrastructure schemes are intrinsically exciting and among the most stirring of peacetime management challenges. My father was a leader of the comprehensive modernisation of the Glasgow Underground from 1974 until the new system opened in 1980. He puzzled over how to dig new tunnels, move stations and complete numerous other tasks, big and small. Those leading Crossrail will, I know, have paid a heavy price in unsociable hours, weekend working and frustration with politicians. They will equally have enjoyed intense satisfaction at surmounting problems that once seemed beyond them. Wolmar explains well how, in a city as crowded as London, anyone designing a rail tunnel has to pick a path between obstructions. He describes the minute precision that was required when the tunnelling machines ran through the existing Tottenham Court Road Underground station. The vast moving construction sites ate through the soil just 85cm above the tunnels for the Northern Line, and 35cm below the piles supporting the escalators. The question is whether the project has gone, as presented by Wolmar, as well as any such scheme feasibly could. He categorises as “a mishap” an explosion in November 2017 of an electrical transformer feeding power to newly-energised overhead wires. A less charitable author might have attributed the incident to inadequate planning. It has contributed significantly to the delayed opening. While a scheme less completely controlled by the public sector might not have handled such hurdles better, a deal where the public paymasters and private builders had some formal accountability mechanism might have clarified the reasons for the hold-ups. The questions and doubts, however, are largely brushed away on the basis they will evaporate when passengers are marvelling at the scheme’s elegance and efficiency. They may do so. The project looks a model of order compared with, say, the far smaller East Side Access project to bring the Long Island Rail Road to the east side of Manhattan in New York. That scheme, originally scheduled to cost $4.3bn and open in 2009, now looks set to cost at least $11.1bn and open in 2022. But those of us who would like the UK economy to develop and depend less on motor vehicles, hanker for more railways to be electrified, more signalling to boost capacity and new lines to be built. There will surely be lessons from Crossrail to suggest how the work might have been done even more efficiently and quickly. Given the timing, they will have to wait until this book’s second edition.