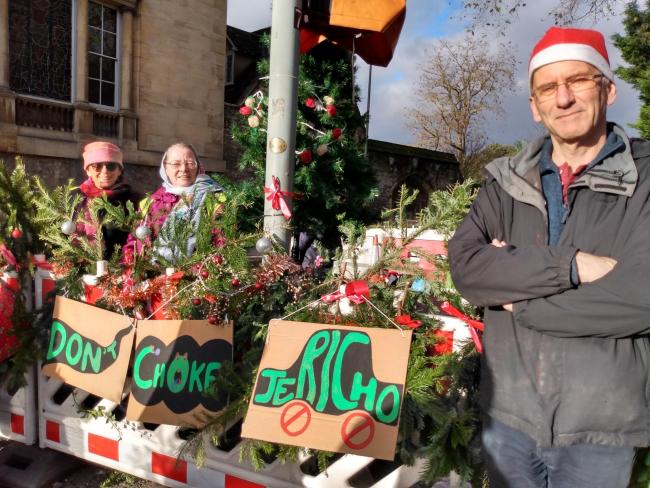 Here’s a prediction for my second blog of the decade: the twenties are going to see a series of battles across the country over increasing restraints put on cars. With concerns about climate change and, probably more importantly for local disputes, air pollution, the notion that cars should be allowed unrestrained access to urban centres and rat runs through residential streets will be challenged in towns and cities across the UK.

We have been given a taste of things to come during this first week of the New Year. York, for example, announced that it plans to ban diesel vehicles from its city centre next year and to stop all non-essential car traffic from entering the city centre by 2023. Numerous similar moves in European cities are being made in places as different as Madrid, Paris and Oslo.

Countless smaller towns are considering these types of measures but the battle for hearts and minds has by no means been won. Whenever a local authority proposes restrictions on the use of cars, whether it is speed limits, reductions in car parking or bans in certain streets, the mini-Jeremy Clarksons pop out from under the radar and start protesting about the freedom of motorists, the inconvenience of detours and the risk to local shops.

Such a battle has just begun in Oxford where the hub of a key shopping area, Walton Street, had to be closed for repairs to the surface. As further problems emerged during the works, the road ended up being closed for several months and many residents suddenly found that they enjoyed the improvement to the environment that had been brought about by happenstance. Now the council is consulting over whether to make it permanent. (see the picture and https://www.oxfordmail.co.uk/news/18120052.walton-street-closure-barrier-oxford-decorated-christmas/ for coverage of how barriers were decorated for Xmas by protestors)

Inevitably there are opponents who argue that permanent closure would be bad for business but an initial consultation suggests they are in a minority. Paul Fermer, Assistant Director for Community Operations, said that an informal local consultation resulted in ‘more than 490 individual responses with more than 60 per cent in favour of retaining the current closure.

During the recent Christmas period, the barrier blocking the street was decorated by supporters who put up the slogan ‘Don’t choke Jericho’. Opponents under the banner of ‘Jericho connections’ express concerns about increased rat running in side streets and the lack of access for emergency vehicles, but supporters say their concerns can be addressed.

John Mair who chaired a recent well-attended local meeting on the issue, said: ‘Proper traffic management measures will ensure that those who need access can get it.’ It was a street which 3,000 cars per day were using, most of them with a single occupant, a key indicator of ‘rat running’.

Mair is convinced that making it permanent would be transformational for the area. He said’ This is a once in a lifetime opportunity to regain the street for the community. Jericho and Walton manor will rise to it and provide an exemplar to the rest of the UK and a lasting legacy for our children and grand-children’. He added: ‘

There is now a consultation period running until the end of April but Mair is hopeful that most people will see the benefits to the environment, the air quality and, indeed, the commercial activity of the shops. Previous similar closures have demonstrated that any loss of trade from the small inconvenience experienced by car users is more than matched by an increase in shoppers who prefer the quieter, healthier and safer environment. Shopkeepers tend to overestimate the percentage of their customers who use cars and underestimate the numbers  who cycle or walk and who, according to surveys, tend to spend more than the motorists.

Most importantly, the battle in Jericho could result in other streets in Oxford being closed and campaigners across the country will be looking to see how this high profile case is resolved.