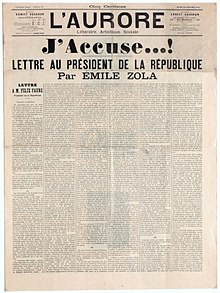 (With apologies to Émile Zola)

Permit me to set out how a key industry is being wrecked by the cowardice and failings of a series its stakeholders. I address you, Mr Johnson, because  it is under your name (I was, like Zola going to say ‘reign’ but it is not quite appropriate), that the railways are set to be more damaged than they were by Richard Beeching and the politicians who followed his recommendations.

Like Félix Faure, the president to whom Zola addressed his 1898 letter, you have been rather distracted by other considerations. He had just established an alliance with Russia, you have just disengaged us from one with the rest of Europe. Nevertheless, you need to pay some attention to an industry that accounts for more than 10 per cent of the distance travelled by people during the year. Or it did. At the moment that figure is just 1-2 per cent of modal share and there is little chance of this increasingly greatly over the next few months or even possibly years.

There are a lot of culprits in this scandal, Mr Johnson, and scandal it is, but let’s start with your involvement. After all, the buck stops with you. Your key mistake, as we all know, was to order the lockdown far too late. This has greatly damaged the rail industry because it has extended the length of the lockdown and, far worse, meant that many transport workers were exposed to far greater risk than they needed to have been. There should have been protective measures in place for them straight away. Your second mistake is the incoherence of the message and the emphasis on car use. Why is it ok to make leisure trips in cars but not by train? Why have trains being singled out as risky but not aeroplanes?

Therefore, of course, alongside you in the dock must be your transport secretary Grant Shapps. A man with a greater understanding of the relationship between transport and the environment might just, conceivably, have worked out that since air pollution greatly exacerbates the effect of diseases like Covid, and may in fact even be a contributory cause, then ensuring a more sustainable transport system emerged out of this pandemic might have been sensible. But no. It almost seems that there is a perverse encouragement of the most damaging modes. Road transport has been encouraged and aviation has not only been supported  by loans but has not even been required to pay fuel tax which would level the playing field between modes.

Next in the dock is Peter Hendy. Sorry, Peter, I do not buy your excuses published in the previous issue of Rail  that you had no choice but to recommend people to keep off the trains because it was ‘the most serious crisis of modern times’. It could have been done very differently. You have acquiesced far too easily to the demands of government, Network Rail’s paymaster, rather than shown the independent spirit so readily demonstrated by the likes of Michael O’Leary, a man I thought I would never praise in this column. He said flatly, though, that he could not run his airline with the middle seats unoccupied as it was simply uneconomic. Actually, he probably could but by standing up to the government, ministers wilted and simply acquiesced. We needed some strong figure in the industry to stand up to government but there has been no one to knock on number 10‘s door and argue the case.

I was not, Peter, suggesting there should not have been an initial lockdown. But the messaging could have been more supportive of the railways. It could have encouraged rail use, but ensured right from the beginning that people wore masks and travelled at the least busy times.

I know from my conversations with senior people in the industry that you, Peter, are out on a limb. There is no ‘united front’ as you stated in your letter in the last issue.Instead, to a man and woman they are aghast at what is happening to this industry. The damage of messaging for three months – and continuing to do so even after the pubs and churches have opened – that the railways are unsafe and people only use trains for ‘essential travel’ is incalculable. One of my contacts suggested that after 9/11 people did return to taking planes but that was partly because they often had no alternative – you cannot drive from London to Mumbai and because the industry took radical steps to improve security at airports. Railways are in competition with other modes of transport and, worse, many people will have discovered that they no longer need to commute daily.

Then there are the unions. I was aghast when Manuel Cortes, the head of TSSA, said, on the partial relaxation of the lockdown that people should not use this as an excuse to travel on the railways! I do not understand how he does not recognise that the longer people are asked not to use the trains, the fewer jobs are likely to be available to his members. And as for threatening to go on strike if the two metre rule were abandoned, that is the worst form of sabre rattling imaginable. This is not the ‘can do’ attitude that is needed. I recognise that there are risks for railway staff but these can be mitigated with shields, masks and sanitation.

Last in the dock is the Rail Delivery Group. I know that you have being doing some work behind the scenes but chaps, really to call yourself the Rail Delivery Group and then tell everyone not use your trains is a ridiculous contradiction. The owning groups you represent are all too happy to pocket their 2 per cent – not a fortune I grant you – and run empty trains that, surprise, surprise, are all on time. You’ve got rid of the pesky passengers at last.

I am very proud of working for Rail which has consistently stood up for the railways in a way that seemingly no one else has. Right from the beginning, we have argued that the industry is in a perilous state and facing an existential threat. All of you should have been batting for the railways, saying in public what you have expressed in private, arguing the case that the railways were safe to travel on with the right precautions. And avoiding any ‘don’t use the railways, you will die’ messaging, as the bus industry has done.

All of you have acquiesced to a tragedy and betrayed the railways. You should have emphasised throughout what we all know – that railways are incompatible with social distancing. If this pandemic goes on without a vaccine or a cure, and continues at a low level for months if not years, what will be left of the rail industry? Even I as a train lover would not be able to justify spending billions on a system that no one uses. What then? So when investment programmes cut back, services reduced and timetables pared down, remember what you did in this Affaire. Were you on the side of the railways or did you just bow your head, yessir, no sir, three bags full sir?

After my little spat over the exaggerated claims about the railways having being largely funded by the proceeds of slavery on Twitter and in the last issue, I thought I would look at a rather more relevant issues around issues of race. I tried to find out how many BAME people are employed in the industry and whether this was being monitored.

And the shocking reply from industry spokespeople is that there is no such work taking place. While some train operators and Network Rail do monitor numbers, there is no overall industry monitoring and around a third of companies do not collect any statistics at all. Railway Safety and Standards Board and Network Rail have produced data on wage gaps between BAME and white staff.

ASLEF, the train drivers union, did an excellent report, On Track with Diversity which was very thorough and honest, as it started with an admission from the General Secretary, Mick Whelan, that at his annual conference too many train drivers resembled him ‘middle-aged, male and white’. ASLEF’s survey revealed that 6.5 per cent of drivers – the vast majority of whom are represented by the union are BAME. That struck me as quite low, but then as a Londoner the numbers I see are greater than elsewhere in the country. Indeed, I can hardly remember ever seeing a long distance non-white driver when i travel on InterCity (let’s bring back that brand) trains

There is clearly a need for such honesty to be shown more widely in the industry. It is, frankly, a scandal that at the various rail industry events I attend, the number of non-white faces can be counted on one or, at best, two hands. Over the course of my 25 years of writing about the industry, I have interviewed perhaps a dozen non-white managers, of whom David Waboso – in his various guises – was by far the most senior.

This has got to change and can only if data is available. So as a start, one of the first tasks of whatever new bodies emerge is to ensure there is industry wide ethnic monitoring.