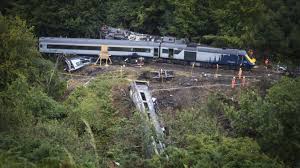 Of all the headline stories that become the subject of these columns, this is the one I have dreaded having to write about. The long period without any fatalities in accidents on the national network has ended and it is particularly poignant that two of the deaths were rail workers on duty. The fact that there has been an unprecedented period of nearly 13 years without such a tragedy is an illustration of the recent step change in rail safety, undoubtedly spurred by the dreadful spate of accidents in the late 1990s and early 2000s that must never be forgotten.

Looking further back, within the lifetime of many Rail readers including myself, rail accidents were a regular occurrence with an expectation that there would be several fatal crashes every year. In the 1970s, there 20 accidents involving fatalities, which caused 73 deaths and around ten times that number of injuries. The causes varied from ‘intoxicated driver’ to ‘overspeed at curves’, and many have been systematically eliminated either through regulation or technology.

The same, incidentally, has happened in the air industry. When I was transport correspondent of The Independent in the 1990s, I covered the aftermath of several major disasters and there was concern within the industry that unless safety was markedly improved, the growth in the number of flights would mean there would be so many major incidents that the resulting publicity would deter people from flying. Now, thanks to improved technology and training, air accidents are a rarity, though the series of events leading up to the two involving the new Boeing 737-Max aeroplanes is an object lesson in how complacency and regulatory capture by an industry can result in disaster.

This is not the case with the rail industry as testified by the recent marked improvement which has seen an unprecedented long period without a fatality. It is worth recalling however, that during this period there was the Sandilands tram crash of 2016 in which seven people were killed. That tragedy was partly the result of complacency given the failure to recognise either the risks at that particular location or the effect of tiredness on drivers working onerous shifts.

Moreover, the improvement of safety on the railways has, at times, been far too gradual. It took the horror of Ladbroke Grove to see the introduction of TPWS, a technology that had already in one form or another been available since the early 20th century to reduce the danger of signals passed at danger. Indeed, given that the railways were at their most risky in the final years of the 19th century, much more could have been done earlier or been introduced more widely.

Inevitably, the old risks have given way to new ones and this accident is the result of the main one facing the railways, climate change. The industry must respond far more quickly to this new situation than it has, at times, to safety risks in the past.

It is far too simplistic to characterise Network Rail as having done nothing to mitigate the potential effects of extreme weather events caused by climate change. However, it was rather chilling that just a couple of weeks before the accident, the Office of Road and Rail’s annual safety report on the railways ‘The vulnerability of some asset[s] to the challenges of climate change and more frequent extreme weather events was illustrated during 2019/20. The year saw substantial increases in flooding events, earthworks failures and trains striking trees on the line’. It went on to say that while Network Rail has drawn up plans to ‘address climate change and increase resilience to extreme weather, these plans are not keeping up with the frequency and severity of these events’. It is, of course, down to money and it is not exactly a good time for Network Rail to be asking for more. It may well be, then, that one unfortunate result of this accident is that resources earmarked for improvements and enhancements will need to be redirected to improving resilience of the railway.

Moreover, the old risks remain. Inevitably during such a long period without a fatality, there were several near misses such as the run through of the sleeper train in Edinburgh, the derailment at Waterloo and in the Watford tunnel, and most of all, the SPAD involving Tangmere at Wooton Bassett which still sends a shiver down my spine every time I think about it. Therefore, there has also been an element of luck over this period but there have also been countless tales of quick thinking railway workers who have prevented incidents from turning into disasters. Indeed, the woman rail worker who went down the tracks to contact the authorities about the derailment is the latest in this panoply of rail heroes. One could say, too, that there was an element of good fortune in that the accident occurred at a time when Aberdeen, the train’s starting point, was in lockdown and therefore the number of passengers was particularly low.

This accident could not have happened at a worse time for the industry, given the effects of the pandemic which has resulted in such a sharp and prolonged decline in passenger numbers. Yet, the railways are nothing if not resilient. There was one very heartening aspect of this tragedy, the way the industry came together, as it always does in times like this. Andrew Haines, the boss of Network Rail, did not hesitate to break his holiday and return to deal with the accident, and it was significant that the Transport Secretary, Grant Shapps, also responded immediately. I was struck by the readiness of supporters of the industry to call out the Scottish edition of The Sun for its crass and insensitive front page headline ‘Death Express’. Social media these days makes it far easier for such complaints to escalate and such was the furore that the hapless editor quickly apologised, realising that otherwise The Sun risked ending up with the same pariah status as it does already in Liverpool, after its disgraceful and untruthful coverage of the Hillsborough disaster that 30 years on still means you struggle to find a copy of the paper in that city. This rapid rebuttal, carried out largely on an online petition by ordinary people, is an example which in these difficult times industry leaders and PR staff should note. There is much support for the railways out there and given the terrible situation of the railways at the moment, that resource needs to be tapped.

The announcement of the July inflation figure is the trigger for the first of what becomes three annual national news stories about fares rises. This year there is enormous pressure from both within and outside the industry to ensure that the regular January rise does not happen.

As Railfuture (declaration: of which I am honorary president) put it in a press release, ‘It’s very important that the government sends a signal that they want people to use trains. As the government can find money for people to get £10 off at Burger King, then it can afford to freeze rail fares.’ Indeed  – I did find it rather strange that I managed to buy breakfast for me, my wife and stepdaughter for just £7, half the normal price, at Pret in Stansted Airport but no such concession was on offer for the train ride there.

The first thing I learnt at university for my Economics degree was that when demand is low, then prices should fall in order to attract more custom. Simples and therefore I would go rather further than Railfuture’s suggestion of a zero inflation rise. Instead, the government should announce it was going to reduce fares perhaps by the rate of inflation or even by more and would do so immediately.This could be done in conjunction with various offers to get people to use the railways such ‘as buy one get one free’ or a new national railcard which would be available to anyone (after all, it is only the 30 to 59 year olds who are able bodied, not in full time education or the services and not regularly travelling with the same companion who end up paying full fares).

I am aware of the arguments against this sort of thing. Those who would use the railway at existing prices are being offered a discount. But, as my cheap breakfast at Pret shows, plenty of money is being wasted in that way already as I was quite prepared to pay the normal price for it. The imperative is to get people to regain the railway habit or else, as I warned in the last issue, closures are inevitable and ministers must know that they would not be popular.

I know it would be too much to dream of a tax rise on fuel, to help shift more people onto  rail, because that would involve a clear policy of encouraging sustainable transport – and we have never had that in this country – but that would be the best way forward.