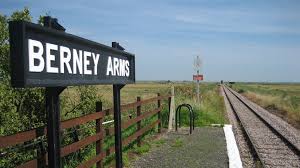 Lots of fun has been had over the past couple of weeks with Berney Arms, an obscure station in Norfolk named after a pub closed years ago. The Daily Telegraph ran a picture of the station because apparently less than one passenger per week had used the halt in the year to the end of March 2020. The Guardian ran a very similar article by the paper’s transport correspondent, Gwyn Topham, with the same picture and noting that most of its patronage had been lost because of engineering works that had closed the line for 10 months of the year. Moreover, the main local feature, a windmill belonging to English Heritage is currently closed.

Richard Wellings deputy director of the Institute of Economic Affairs, a right-wing think tank, was ecstatic about the coverage, tweeting that ‘There is a strong economic case for closing railway stations and lines which are poorly used and where the costs exceed the benefits. Some routes could be converted to roads, which would typically benefit far more travellers in rural areas’. Wellings has form in this regard having, in 2015, written a pamphlet, with long time anti-rail campaigner, Paul Withrington, ‘Paving over the Tracks: a Better Use of Britain’s Railways’ which argued that ‘there is strong evidence that allowing some commuter railways to be converted into busways would provide higher capacity at lower cost, reduce fares for passengers and cut subsidies from taxpayers. A related policy of phasing out government support for the railways could save around £6 billion a year’.

While none of this nonsense about rail conversion is taken particularly seriously except by a group on the extreme right wing of the Tory party,  the sort of coverage about little-used stations helps creates a political climate where closing lines becomes more acceptable. I was reminded by a reader, Chris Davis, that remarkably the plan to replace trains with buses at Marylebone was actually seriously considered in the 1980s. A report recommending the conversion of the station to coach use was produced for the National Bus Company by the eminent transport expert, Professor Peter Hall in 1983 and Peter Parket, the chairman of British Rail at the time, felt he had to respond by commissioning a report frm Coopers & Lybrand, examining seven routes in London for possible conversion. The only route that appeared feasible was between Marylebone station and Northolt Junction, which would have resulted in the closure of four intermediate services. It was only after protests by a local rail travellers group, the threat of various legal actions and a wider public outcry that the plan was eventually dropped. This was the culmination of the efforts of various campaigns, starting with the Railway Conversion League in the 1950s, and running through to the work of the Withrington’s Transport Watch which was quite active in the early 2000s, but is now largely defunct with the aforementioned Wellings who, since May this year, has called himself its director. It is not inconceivable that such ideas could become mainstream again given that usage of the railways has plummeted as a result of the Covid-19 pandemic and, as we all know, the enormous bill for keeping the railways open displeases the Treasury. Even if such conversions are unlikely to ever be realised, this kind of coverage is deeply damaging to the reputation of the railways.

So why did these various journalists on the Telegraph, Guardian  and several other media outlets suddenly focus their attention on a station which clearly they had never been to? Step forward the press officers at the Office of Road and Rail, the body which is supposed to be regulating the industry and looking after the interests of passengers and taxpayers. Its stated remit includes ‘protecting rail passengers’ and ‘promoting investment in the rail network’.

The press release on station usage issued on December 1st highlighted the fact that Britain’s busiest station, Waterloo, had 7.3 million fewer passengers than in the previous year, not unexpected given that lockdown started on March 23 and even before that people concerned about Covid-19 were starting to work from home.

After a paragraph explaining the source of the figures, the third one read: ‘The least used station was Berney Arms in Norfolk which recorded 42 entries and exits during the year. Usage at this station fell by 90% in 2019-20 due to the lines serving the station being closed most of the year for signalling upgrade work. Last year’s least used stations; Denton and Stanlow & Thornton increased from 46 to 92 and 82 respectively’.

Now I recognise that putting out press releases for such an organisation is not a very exciting job and therefore it may be tempting to spice up the publication of figures on passenger numbers going through stations to ensure coverage. But, the chaps and chappesses of the press office, and indeed people higher up the hierarchy in ORR should not be concerned with how many column inches they are getting in the national press.  They must be canny enough to know that statistics on little used stations are bound to be picked up in news rooms as funny and quirky, and then be exploited by the like of Wellings who, one could imagine, was as excited when seeing these figures as a 1950s schoolboy copping his final Pacific A4. Just to make sure that it was the issue of the least-used stations that were picked up by the media, even the quote in the press release from the statistical analyst at the ORR, Jay Symonds, focussed on Berney Arms and the other little used stations.

So a station that was effectively out of action for 10 months and is pretty much in the middle of nowhere, as those photos show, ends up attracting more attention than good news stories mentioned later in the press release such as the fact that one of the new stations opened that year attracted 137,000 passengers. Moreover, these statistics are essentially estimates based mostly on ticket sales and of course these little used stations do not have ticket machines or any staff. Therefore passengers have to buy their tickets on the train and this is notoriously haphazard process, with conductors often unable to reach all passengers in time. So quite probably the figure of 42 which Wellings gleefully interpreted as ‘fewer than one a week’ may well have been wrong by quite a large factor and certainly the equally silly point about Stanlow & Thornton doubling its patronage is

Just perhaps the good people at the ORR could have thought of their wider remit before allowing through such a press release. It’s not as if there aren’t a host of serious issues that could have been highlighted in the press release. Most importantly, the year 2019/20, only slightly affected by Covid, will be the baseline for future use of the railway. For some years ahead – quite possibly for ever if one is to be pessimistic – this will be the year of ‘peak rail’. Some mention of the implications of this might not have been out of place from an organisation with serious intent.

I am not being a miserable old git here. I like a laugh as much as anyone, but the railway faces a more uncertain future than at any time since Beeching and it not a good moment to highlight some nonsensical statistics. So next year just perhaps could the ORR desist from giving the opportunity for the industry’s enemies to make hay?

It’s been all quiet on the fares front despite months of saying the railway will need a more flexible ticketing policy once things begin to return to normal. The Department for Transport’s omertà over the issue seemed to have been broken when last month The Times ran a piece suggesting that above inflation fares would be imposed on rail users because of the losses being incurred as a result of the pandemic.

The Treasury, apparently, was behind these moves. Now I had thought that while those very clever people who work for the Treasury tend to be blind to the social implications of the decisions they take, at least they know a thing or two about economics. The first lecture I attended on my Warwick University economics course was about supply and demand. With a few squiggles of chalk on a blackboard, Professor Ford drew a demand curve which showed that when prices go up, demand goes down, and vice versa.

Of course, the proportion in which it goes up or down is not necessarily the same depending on what sort of product you are considering. You have to take into account another factor, which is the elasticity of demand. In simple terms, this determines the amount of revenue you get. So if you put up prices by £1, and the effect is to get £1 more in revenue then the elasticity of 1. An elasticity of less than one suggests that the produce is inelastic, and therefore putting up the fares will result in an increase in revenue as most passengers will stay using the rails. And if demand is highly elastic, then revenue will fall.

The boffins at the Treasury are therefore suggesting that demand is inelastic, that passengers will use the railway come what may. But if that is their belief, they are out of kilter in this new world. Passengers will be particularly sensitive to fares, especially if they have an alternative, such as working at home or using the car which they have suddenly rediscovered thanks to the pandemic. And of course, if the politicians are serious about a Green New Deal, then encouraging rail use should be high on the agenda. The next few months will tell us if they have learnt anything from this disaster.