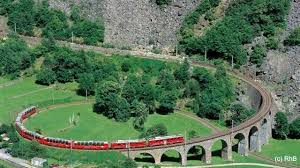 We are prisoners of history but we don’t have to be. When writing my various books on the history of the railways, it is always noticeable the extent to which the development of the railways in Britain was different than in the rest of Europe.

In this country, the railways were built in haphazard way with no overall plan. The British railway network was created through a process of private development. An entrepreneur or group of investors would suggest building a particular line and put forward proposals setting out its route to Parliament. The MPs and Lords would then decide whether the scheme could proceed, with finance and, at times, local self interest being the main determinants.

The USA was the only other country where the process of creating the rail network was so random and arbitrary. Virtually everywhere else, there was a plan put forward by the state which would determine the routes and the places that the railways would serve. This was even the case in India which was a British colony at the time.

As I wrote in my polemical book, Are Trams Socialist?, (spoiler alert, the answer is no), we have never had a transport policy in this country. Our transport infrastructure has always been provided rather randomly, most recently as the result of ludicrous cost benefit analysis calculations, but we have never had a government which has set out a plan to, for example, guarantee that every town above a certain size has a railway station or bus routes that offer a basic service level into the national network.

I was reminded of this history lesson by an excellent presentation by Lynne Sloman, a long time transport activist, and Jonathan Tyler, a timetabling expert, at a Parliamentary event sponsored by the TSSA union setting out the idea of a Taktfahrplan for the UK. This literally translates as ‘clock timetable’ but in reality means rather more, the creation of a transport network determined by adherence to a timetable which is designed to provided a guaranteed level of service. The fundamental concept is that it is the timetable which governs other aspects of the service, such as the type of rolling stock and the signalling system, rather than the other way round. The implication, therefore, is that investment decisions are made around ensuring that the service meets certain set standards, rather than simply building infrastructure and then determining how it should best be used.

The philosophy goes deeper than this, too. In Switzerland, where this concept was first set out in 1982, levels of service were established in legislation. Lynne Sloman gave the example of the Zurich verkehsverbund which establishes minimum service levels. Hence, for settlements of 300 or more, the public transport authorities are required to ensure that there will be a public transport service every hour. Corridors where there are multiple settlements get a half hourly service and large dense ones are guaranteed a 15 minute service. The services run from 6am or thereabouts to midnight, every day of the week and crucially timetables are co-ordinated so that transfers from bus to train or tram and vice versa involved only short waits.

Sloman cited a fascination example of a village near Winterthur, the second biggest town in the Zurich canton with a population of 564. Despite its small size, it has a half hourly service to connect with train services that can then take people to Winterthur and thence Zurich, starting at 5 48 in the morning and ending at 23 38 in the evening from Winterthur, enabling people to get back after night time activity

. This represents a totally different philosophy behind public transport provision. It is, as she put it, the noting that public transport is a service to which everyone is entitled, a basic right like running water, electricity and sanitary facilities, which can be relied upon to be always available. Contrast that with the provision in the UK which is seen as second best to the car, for use only by those who do not have access to their own vehicle. In other words, it is the difference between being able to rely on getting pretty much anywhere by public transport with the idea that it is, at best, a ‘partial safety net’ as Sloman put it. Moreover, underlying the whole philosophy in the UK is that public transport needs to be ‘commercial’ and that determines decisions on routes and frequencies, rather than local needs.

But changing this is surely a pipedream? How could we do it here? Would it not cost a fortune? At the moment the whole system mitigates against coherent thinking like this. Outside London, local transport authorities lack the power even to coordinate bus services and timetables. They are at the mercy of private operators who run services when they can make a profit with local authorities paying for non-commercial services. However, with austerity, those services have been pared back with, literally, thousands of services being cut in recent years. Moreover, there is no mechanism through which bus and rail services are coordinated. Even when the services are provided by the same company, such as Go-Ahead or Stagecoach, little effort is made to run them together (one good but rare exception was the Megabus services provided by Stagecoach which used rail journeys to and from East Midlands Parkway for part of the journey between London and Hull).

Rail services often do not even coordinate with each other. Jonathan Tyler who lives in York related how he had to lobby Network Rail and Transpennine Express to restore a timetabled connection between the trains from Middlesbrough and the London bound services, because after a change there was a 7 minute gap and apparently 8 or more minutes are required for York transfers. That’s because under the current system, Network Rail receives bids for train paths from train operators and has to try to fit them together – but unlike in a jigsaw the pieces do not always fit. To make matters worse, there is the power of the Office of Road and Rail to mandate certain decisions on train paths, predicated on its remit to encourage competition. All of this results in a ‘sub-optimal’ – to use ghastly businessspeak – situation.

Nevertheless, despite the dire current situation, Sloman and Tyler argue strongly that it is possible to move towards this system. The first step, they say, is ‘the creation of a single body with power and responsibility to create a national public transport timetable’. The Williams review may well offer a start in terms of creating a guiding mind for the railways but something more comprehensive, which includes bus services, will be needed.

The Swiss system is interesting in that it is not all publicly-owned but all providers have to adhere to the service levels set by legislation or regulation. Public ownership of all the providers would make coordination easy but it is not a precondition for working towards a British type of Taktfahrplan.

Labour has the opportunity, here, to offer something truly exciting in the event of a general election, which may be sooner rather than later. I know that shadow transport secretary Andy McDonald has a team working on innovative transport ideas and some, cheaper bus services for young people, have already been announced but so far policies have been looking a bit piecemeal. What is needed is a clear vision of how to improve public transport and coordinate services across the piece. There is a fair wind behind proposals to improve public transport services as the public is undoubtedly in favour.  There is a need for a genuine new approach to the whole idea of public transport starting with a fresh philosophy underpinning, putting it forwards as a ‘right’ to everyone rather than a commercial service available to the few. Incidentally, this should not be a party political issue, but, as in Europe, a consensual approach to providing good public transport, as is the case with health, education, policing, pensions etc. Unfortunately, our history mitigates against such common sense.

I was taking a train from Finsbury Park the other day and realised that once I was on a platform, which are all accessible from a rather grotty underpass, it is impossible to find out about any trains other than those due to arrive first at each platform. Even in the underpass, there is no indicator of train services although there is one outside above the ticket office. This problem has been exacerbated because Thameslink trains now serve the station.

When I related this to a fellow transport nerd, I was told about a far worse situation at London Bridge where despite the massive – and largely excellent – £1bn refurbishment, the destination boards in the lower section do not always include trains in the upper level. The services are in fact run by two different companies, Southern and SouthEastern, which despite both being part of Govia do not seem to coordinate. An Observer reader mentioned this to the paper’s consumer affairs agony aunt and it was confirmed that not all services are displayed on all departure boards. This caused the reader, and indeed, the Observer’s respondent, to miss trains.

Providing basic information about trains services is not rocket science but it seems that a quarter of century into privatisation, the separation between infrastructure provider and between the various train operators still causes problems.