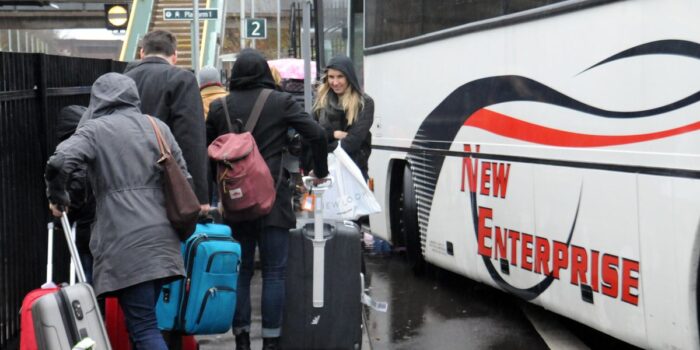 If there’s one phrase that deters people from trying to take a train, it is ‘a rail replacement service will operate on this route’. Apart from having to sit on grotty old buses, I have had several bad experiences, such some years ago not being allowed late at night to get on a coach with a bike, despite there being plenty of room in the luggage compartments and being barely half a dozen other passengers. This forced me to cycle several miles on dangerous roads in pitch dark with cars speeding past me at 60 MPH. Research a few years ago by Passenger Focus suggested that just over half of people would not use the train if part of the journey involved a replacement bus. I am certainly one of those. Even I, with my reluctance to drive anywhere, will jump in the car to avoid those smelly old buses operating on greatly extended service times.

Rail replacement buses always appear to be a service operated on the cheap with little forethought or planning, and patched together at the last minute. Yet, there is a dirty little secret that I confess I only learnt about when reading an article by Alex Warner, the chief executive of Flash Forward Consulting. This is the fact that rail replacement services are almost all provided by companies associated with the train operating companies which require them. Moreover, they are a highly profitable area for those companies, but it is very difficult to ascertain the level of that profit because it is effectively an internal pricing mechanism between companies with the same owner.

This feathering of their own nests is, at least, rather duplicitous and, at worst, gives the impression of dodgy dealing. As Warner says, by awarding these contracts essentially in house it emphasises ‘the financial well-being of the greater organisational good than the needs of customers’. Moreover, it is a highly profitable business. In some cases – such as with FirstGroup – there has never been a tendering process but in others it is quite possible for the train operator to specify low prices in the tender in order to win the contract but then pay much more to obtain buses or taxis which boosts their subsidiary’s profits and reduces the profit level of the train operator – money which today is guaranteed by the taxpayer.

Virtually every train operator obtains services from its owning group’s ‘road transport services’ provider. Moreover, some of these contracts continue after the franchisee has departed. For example, Arriva managed to obtain a two year contract to provide road services for its Northern services earlier this year just before the franchise was handed over to the government run operator of last resort. Arriva also runs the service in Wales with a contract lasting until Jan next year despite losing the franchise in October 2018. Similarly, Stagecoach still runs rail replacement services for LNER despite the fact that it handed back the keys to the franchise two years ago and the contract was never subject to a tendering process.

One industry source told me that at times the train operators can earn more from providing bus and taxi services to replace trains, than in operating rail services themselves, not least because of the small margins available in the franchising process. One taxi provider in the north of England told me: ‘We would love to get some of this business but when it is tendered, unrealistic bids are put in which makes it impossible for us to win the contracts.’

There are a lot of reasons why this is an unsatisfactory state of affairs. There is no proper market for services, there is no incentive for the provider to offer a good service or even a service at all if the in-hosue provider does not have enough vehicles.  Worse, there is a disincentive for train operators to use alternative rail routes. This is because they would have to pay extra track access charges to Network Rail and therefore it becomes more profitable and simpler to simply offer the dreaded buses and coaches instead.

The Department for Transport has been aware of this unsatisfactory situation for some time to come but has found it difficult to take any action. The problem is that this is a secondary service, and therefore the specifications in the train operators’ contract were too vague to be policed. Now there is a greater imperative for the Department to take action because it is taxpayers’ money that is being wasted.  Certainly, at the very minimum, there should be an open tendering process given that these contracts involve millions, and even tens of millions, of pounds.

But it should not only be about money. Given how frequently rail replacement services are used – I have visited Brighton about twice annually at weekends in the past six years or so and it seems almost like every time that I see more of Three Bridges or Haywards Heath than I ever want to – more should be done about improving the quality of what is on offer. So often in my experience, there is little explanation of the length of delays, the location of buses, the availability of refreshments and toilets and so on. And, personal gripe this, why is it absolutely universal that bikes cannot be carried when most coaches have plenty of luggage space available? That stopped me using trains twice this summer.

Now that the Department has all the levers of power at its disposal, it can ensure that a much higher level of service is provided, with more staff provided to help passengers find their way, better quality coaches and much clearer information. The Department can also ensure that the cozy cartel with train operators essentially awarding themselves contracts is broken up, and outsiders allowed to put in bids that will be fairly assessed. Perhaps the Department or, probably better, Network Rail should let the contracts, ensuring the operators – who in future will be mere management contractors rather than franchisees – are cut out of the process. None of this seems very radical but this area has been one of the clear failures by the private sector to make any improvements on what came before under British Rail. Perhaps one day, ‘rail replacement’ will not be the dreaded phrase no passenger wants to hear, but I somehow doubt it.

My new book, Cathedrals of Steam, is the story of the London terminus stations and there will be a feature about it in Rail magazine in a couple of issues time. The book, though, has been rather unfortunately timed. When I toured the stations recently to film a promotional video, it was worrying how few people there were and how many of the facilities were closed – and this was before the start of the current lockdown.

In the book, written during the first lockdown, I finished on a note of optimism that passenger numbers would return bringing back the lively hubbub at the stations which we have long taken for granted. And as I write this, there is talk of a vaccine which may well be widely available by the spring.

Two stories in The Times on the day I wrote this article contributed to my gloom. First the paper reported that one in eight shops failed to reopen after the first lockdown. Many of these were at key central locations such as ‘shopping centres’ and ‘railway stations’. On the other hand, retail parks, which are normally reached by people driving, were the least affected.

Then the second piece reported that ‘only 7 per cent of British workers want to return to the office full time’. Half of the respondents said they would want to work from home every day (18 per cent) or most days (32 per cent). The remainder said they would like to work at home some of the time.

Now I realise such surveys need to be taken with a pinch of salt. But we are witnessing a massive societal change that cannot be dismissed as just a blip. Working (or shirking, as some suspect) from home will become far more embedded in our culture. Commuting will be a conscious decision, not an automatic response.

As I write this, there is also news about a possible vaccine. But this should not delude us into thinking that things will all get back to normal and the whole episode can be written off as history. The changes for which the pandemic have been a catalyst are here to stay.  Consequently, the rail industry faces its biggest peacetime crisis in its history. As I have reported several times before in this column, the future of the industry will look very different and its leaders will need great imagination to ensure that the railways not only survive but thrive.