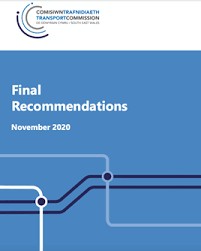 Ever since the creation of a ministry of transport, just over a century ago, there has been a presumption of favouring motor transport over other modes. As I set out in my short book Are Trams Socialist?  The default position of virtually every transport minister has been to respond to increased demand for travel by arguing the case for more roadbuilding.

The current government is no exception. While much publicity is given to fatuous ‘reversing Beeching’ ideas, the reality is that the real investment is focussed on expanding the road network, mainly through improving existing routes as totally new roads have become politically too controversial. Yes of course there is HS2 which will absorb a lot of money but the thrust of the government’s policy is its focus on roads with its £27bn programme.

As I stressed in my little book, the underlying problem with transport policy is that there is no coherent strategy. Ministers have tended to encourage greater use of motor vehicles through both transport and, particularly, planning policies, while simultaneously warning of the terrible consequences of unfettered growth of road use.

One of the consistent failings of transport policy has been the compartmentalisation of both thinking around the issue and policy implementation. Very rarely has any policy been based on a clear examination of the alternatives to, say, building a road.

Now I have seen what should be the future method of developing transport policy. I have been given exclusive advance sight of a radical report, ‘Final Report of the South East Wales Transport Commission’ produced for the Welsh government that points the way to a more rational future.

Let’s recap. The M4 around Newport in south Wales is a notorious bottleneck with long distance traffic using the Severn Tunnel mixing in with large numbers of commuters between Newport, which houses several major office developments, and the Welsh capital and largest conurbation, Cardiff. A widening of the M4 had long been mooted and the Welsh government had even earmarked most of the required £1.6bn funding for a new 14 mile long six lane section around Newport.

Then, in the face of opposition from environmentalists and a realisation that similar road schemes across the world tend merely to encourage greater car use and therefore soon prove ineffective in solving the original problem – there are countless example in the US of new lanes on highways filling up within a few years to resurrect the same traffic jams that had existed prior to the widening.

Therefore in June 2019, Mark Drakeford, the first minister – who was then largely unknown but thanks to Covid has now become a familiar figure on our TV screens, took the radical step of scrapping the plan. It was a brave decision given that the scheme had been promised by the ruling Welsh Labour party in its manifesto and had been approved by a planning inspector who had said that ‘there was a compelling case for the scheme to be implemented’. While questioning whether the scheme was affordable, Drakeford, however stressed it was not money that led him to scrap the plan but the environmental damage to the local Gwent Levels, a unique coastal plain, it would have caused.

Even more radically, Drakeford did not leave it there but instead set up a commission to examine alternatives to widening the road headed by Lord (Terry) Burns, a former permanent secretary at the Treasury and now a Conservative member of the House of Lords. This demonstrated serious intent and the result is a report that should be a blueprint for subsequent assessments when road schemes are being put forward.

The Commission has come up with a complete programme of how to improve transport in a congested vital corridor. At the core of the plan is to improve the existing railway between the mouth of the Severn Tunnel and Cardiff, and various places beyond on branch lines. This is already four track but there are very few local services and commuting is limited by the fact that there are only three stations on that section. The plan, therefore, is to build six new stations, mostly using existing available sites, and to rearrange the tracks so that those on the north side can be used for stopping services and the other two for express trains. Lord Burns told me that since there had been preparatory work on work on some of the stations such as Cardiff Parkway, Magor and Llanwern because they had long been suggested as possible additions, it was the work of moving the tracks around that was likely to be the most difficult aspect of the scheme.

The whole idea is to provide transport capacity as an alternative to people jumping in their cars. With those six new stations, over 90 per cent  of people living in Cardiff and Newport would live within one mile of a rail station or a rapid bus corridor, the creation of which was another part of the report’s recommendation. This would run on parts of the region not served by railways but with many connections to the stations..

Tellingly, the report said that implementing the concept would require a degree of cooperation between bus and railway companies that currently is banned by the Competition and Markets Authority. The report says: ‘In general, a corridor need not be served by both rapid bus and train, as this may undermine the business case for investing in either infrastructure’. This unnecessary competition occurs elsewhere, notably Tyneside where despite years of effort by the local transport organisation which have ended up with failures in court, buses still operate on routes well served by the local metro system.

That is the key. Remember the words ‘integrated transport’ which are little heard about today? Usually this was little more than a commitment to ensure a few buses ran from the local train station but this report shows what it really means.  Cycling has not been forgotten with a commitment to create a series of safe routes and crucially there is an emphasis on having a ticketing system that will work across modes.

For this plan to succeed, a different approach to transport is needed, where it is seen as a social good rather than a business. This, of course, has long been at the heart of conflicts over transport issues in the UK but in fact in many European countries the need for good public transport is recognised by parties of both Left and Right. The answer to the title of my book is  that ‘no, trams are not socialist’ – they are common sense.

And oddly, the consequences of Covid-19 offers an opportunity here. Bus transport, like the railways, has become wholly uneconomic and the companies need to be bailed out by the government. That gives ministers in the Welsh government the opportunity to require companies, who are in receipt of subsidy, to act in a coordinated way to provide the best service without unnecessary expensive competition. After all, the motor car is always going to be the main form of competition.

Ah, I can hear the objectors say, all this is pie in the sky and too expensive. In fact, according to Lord Burns, ‘this is all perfectly feasible at a reasonable cost’. Much of the money that had been earmarked to the road is available and the costing in the report suggests the need for modest sums given that the road was going to cost £1.6bn – the capital cost is estimated at between £590m abnd £840m, while the revenue implications are between £15m and £35m, depending on take up.

The time frame, too, is achievable. The cycling and bus initiatives can be introduced within five years while the rest is achievable in a decade. That is, of course, provided Transport for Wales have both the powers and the finance to push through the plan.

In a way the Commissioners were fortunate. The existing railway is already four tracked and rather underused, and while separating out the two separate fast and slower tracks will be complicated, it is by no means impossible or even that expensive. The mainline in south Wales is an underused asset and while not every other route around the country will have such an obvious way of improving communication, there are lots of other places where the railway could, with the right investment, be put to far more intensive use. The key is to approach transport investment in a holistic and strategic way. Wales has clearly done that, and it is up to other areas to follow this excellent example.

The idea for a new organisation that will act as the ‘guiding mind’ for the railway is gaining ground. With signs that things will start to return to normal in the New Year and that within a few months lockdowns, masks, social distancing and test & trace will be distant memories. (Old Mystic Wolmar seems to have been wrong in his pessimism about a vaccine though nothing is certain yet).

There is little doubt that this organisation will be built around Network Rail, although the precise details of how this will be done remain unclear. While we all know that Network Rail has been anything but a perfect organisation, with a tendency towards unfathomable bureaucracy, gold plating projects, hostility towards outsiders and schemes ‘not invented here’ and a lack of accountability, it has been on an upward path ever since Andrew Haines took over as head of the organisation from Mark Carne two years ago.

That suggests there is only one person qualified to take on the role of heading this new organisation (let’s call it British Railways for mischief’s sake, though realistically Rail UK is probably a more likely candidate) – the aforementioned Haines. There is a good reason for this. For my latest book I have been talking to a lot of the BR old timers who morphed successfully into the privatised railway a quarter of a century ago. Almost to a man (and they are all men….) they went through BR’s management trainee scheme which involved working in various parts of the network – one day you could be in a small parcel office, the next day at division HQ and a couple of months after that organising passenger on a large chunk of the network. There are few of these graduates from the trainee scheme left in the industry but Haines is one of them, and even after privatisation he did a variety of jobs. His knowledge of the whole network is therefore unequalled – add to that the fact he is personable, competent and articulate, and you have the only person up to doing the job. That won’t, however, as he knows, stop me disagreeing with him when I think he is wrong!