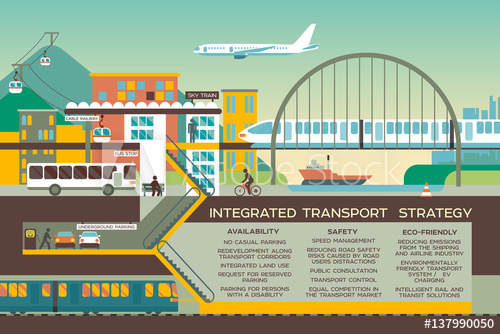 Remember ‘integrated transport’. It was a concept promoted by John Prescott, the much underrated transport secretary whose excellent 10 year transport plan was killed off by reactionary forces in Number 10.

I had not realised, though, until researching my new book on British Railways, that the idea is far older, having first been promoted through the creation of the British Transport Commission by the Labour government in the aftermath of the Second World War. The huge and unwieldy Commission brought together everything from canals and railways to coaches and roadfreight under one organisation. It was an over-ambitious concept that did not survive the 13 years of Tory rule that followed Atlee’s defeat in 1951.

Inevitably, when Labour returned in 1964, the very capable and hard-working Barbara Castle, arguably the best transport secretary we have ever had, set out clearly to bring back the concept, albeit in a rather less all-encompassing way. Her 1968 Transport Act not only for the first time set out clear demarcations between the ‘commercial’ railway, which was self sustaining, and the ‘social’ railway which needed subsidy, but she also set up the Passenger Transport Executives (or called Authorities) in the city regions which were intended to co-ordinate the various forms of public transport those areas. This was partly stimulated by her anger at the lack of any such co-ordination, as she sets out in her autobiography, Fighting all the way: ‘As MP for Blackburn, I had many unhappy experiences of arriving at Manchester Piccadilly station on a dark wet night and having to wait in the rain for an infrequent bus to Manchester Victoria to catch a connection there’. Her purpose in creating the new bodies was to ensure they could ‘build attractive modern interchanges and other links between road and rail’.

Plus ça change, as petty party bickering ensures little progress. In this country, unlike on the Continent, the need for integrated transport is a ferociously contested area between the main political parties which is why France has 27 tram schemes and more on the way. Just as the Tories had undermined then abolished the British Transport Commission, they weakened the Passenger Transport Executives created by Castle in the Transport Act 1985.  The very notion of ‘integrated transport’ has always appalled the free market instincts of the Conservatives, and still does today but the need for it remains equally, if not more, urgent today.

If ever there was a time when we needed ‘integrated transport’, it is today given the damage to public transport caused by the pandemic. It is therefore timely that the Institute for Government, a genuinely independent and neutral think tank, has just published a report, How governments use evidence to make transport policy which looks at how integrated transport has never been properly implemented in the UK. Indeed, the not exactly snappy title should probably have had the word ‘don’t’ after ‘governments’.

The most fundamental failing of transport policy in this country is that there isn’t one and never has been one. As the Institute for Government highlights, there is no government strategy setting out some parameters for the future. Everything is done in silos. The Conservative Party’s 2019 manifesto, which few read given the emphasis on Brexit, was actually quite a radical document, promising an ambitious ‘transport revolution’. This would connect towns and cities by road and rail with significant new investment, and support electric vehicles, cycling and walking. There have been subsequent announcements promising a major reform of bus services, far greater support for walking and cycling and a review of rail franchising all helped along by some £60 billion of capital investment up to 2025. Even if that is likely to be cut back somewhat post-covid, it still leaves a lot. In a wider context, there is also a plan to cut back dramatically on carbon emissions, to phase out cars powered by internal combustion engines and to build the biggest new railway seen in this country since the 19th century.

There is, though, as the report’s authors stress nothing to bring all these disparate ideas together and they kindly quote my book, Are Trams Socialist? in support of this.

I am not making a party political point here. While Tory governments do, as mentioned above, tend to be more reluctant to endorse the concept of integrated transport than Labour ones, the most recent Labour administration did precious little to create a coherent transport strategy once Prescott’s 10 year plan was quietly ditched.

Transport policy aims to achieve three aims: greater accessibility for both people and businesses, lower carbon emissions, and stronger economic growth. But nowhere is there any consideration of how this is best achieved. There is no attempt to assess benefits between schemes. As the report put it, ‘The government needs to use evidence to incorporate new thinking and the best of international practice as well as understanding the trade-offs inherent in any decision’.

For example, no one has ever looked at whether it would be better to spend, say £50bn – at a conservative estimate – on HS2 or on tram and suburban rail schemes in various cities in order to achieve any of these three targets. Perhaps tram schemes would be better in terms of reducing carbon emissions but worse in terms of economic growth. I suspect it would be better on all three counts but we are never going to know. The Institute of Government report is particularly critical of the fact that the outcome of transport schemes is rarely assessed. Without such analysis, it is difficult to base future policy on good evidence.

Or how about, is it better to have a third runway, or to boost the capacity of the Channel Tunnel. The benefit of this type of approach is that crazy ideas like the tunnel between Scotland and Ireland would which I mentioned in the previous issue would quickly be knocked on the head.

Evidence-based assessment is rarely made and even when it is, according to the report, ‘the way evidence is used to inform decisions is not sufficiently transparent. It is often difficult for the public to understand why particular policy or infrastructure decisions have been taken and how evidence has been weighed in their assessment’.

The report highlights the fact that in the UK there is no transport research organisation which carries out this kind of work. Oddly, the Institute suggests this is not really necessary as there is a very good academic community in the UK. I disagree strongly. We are crying out for the sort of dispassionate analysis that would examine various alternatives for a 10 or 20 year time frame. As my little run through of postwar transport history shows, the railways have consistently lost out to roads spending, precisely because the Department for Transport and its predecessors have long been dominated by supporters of the roads lobby. Most ministers, with the honourable exception of Castle, have been of that tendency, too. An independent research institute, able to respond quickly to changes such as the pandemic and technological developments would be invaluable. It might finally close out the HS2 debate!

The most interesting contribution at the Rail Recovery conference was from Sir Peter Hendy because he attempted to blend optimism and pessimism. His admission that there should be fewer trains on the network for the foreseeable future attracted the headlines and clearly it makes sense. It is going to take a long time to get commuters back and restoring the service to the peak levels makes no sense at all. Moreover, the working from home phenomenon was beginning to have an impact before Covid and there will undoubtedly be quite a large number of people who will change their lifestyles permanently. Sir Peter was actually worried that Wednesday would become the only peak day of the week.

His other notable suggestion was that with different patterns of use, such as more leisure travel and fewer commuters, engineering work might be done at a different time – when, though, seems a rather difficult question to answer.

What he did not say is that attracting people back to rail will be impossible without a radical reworking of fares. As I have mentioned several times, the whole concept of peak fares should be abandoned. Yet, I am writing this on a day when fares are going up by more than the Retail Price Index for the first time in a decade. This is beyond insanity, as all the writers on Rail have been saying. There are, yet again, murmurings about ‘flexible season tickets’, already introduced on Northern, but I understand that the Treasury is being absolutely obdurate over any risk to the revenue flow – a rather laughable concern in the light of what is happening at the moment.

While I concur with his gloomier predictions, I cannot share his optimism. There are fundamental reasons as to why the ‘normal’ situation will never return and more become apparent all the time. The exodus from London caused by the combination of Brexit on Europeans and Covid encouraging people to live elsewhere means an estimated 8 per cent reduction in the population. Foreign visitors will be slow to return and there is bound to be a long term impact of the terrible messaging that has scared people off the railways. Big companies like BP & HSBC have proposed big reductions – 50 and 40 per cent respectively – in their office space requirements, and no doubt others will follow. So I still reckon a 60 per cent return of January 2020 loadings is years off. I do hope he is right and I am wrong.