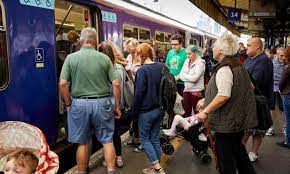 The future of rail has been rather a long time coming. The report on ‘Trains fit for the future’ published at the end of March by the Commons Transport Committee has been a couple of years in gestation and has lost a key part of its remit along the journey.

Two years is a long time in the rail business, particularly given the way the world has changed in that period. Questions that were relevant in 2019, such as how to fit in enough trains onto an overcrowded network, are rather less pressing, to say the least, than they were at the time. Fortunately, the decarbonising agenda has not gone away and the committee was right to devote a lot of its report to examining how reducing the rail industry’s carbon footprint can be achieved.

However, in focussing almost solely on this aspect of what trains will be like in a decade or two, the committee, now chaired by Huw Merriman instead of Lilian Greenwood, has left out rather wider considerations about the future of rail travel and what passengers really want from the railways.

For the book I am writing about British Rail, I have been delving into the history of the development of the High Speed Train 125 and its sadly filed predecessor, the Advanced Passenger Train and I have been surprised by the amount of effort and forethought which went into design details. Much of that was, in fact, down to Beeching as it was under his chairmanship that the Design Panel created by the British Transport Commission in 1956 was upgraded to be a key part of British Rail’s structure. This was, indeed, when British Railways became British Rail, part of a far wider branding exercise that sought to establish a widely recognised coherent design framework that would give the railways a distinctive and lasting style.

This disciplined approach was fundamental in creating a new image for the railways at a time when they were up against it because of greater competition from cars as well as lorries and constant pressure from the government to keep costs to a minimum. The famous double arrow logo emerged at this time, as did the new Rail Alphabet typeface (basically slightly altered Helvetica) that is still used today for station names and signposts, a colour scheme for both the inside and outside of trains and greatly improved uniforms. The most impressive aspect was the effort and thought that went into it which was not, of course, just an end in itself but rather a concerted attempt to present the railways as relevant to the second half of the 20th century.

There were a few turkeys. In the rush to present a futuristic vision, the railways’ heritage was largely forgotten and we ended up with new stations at Euston and Coventry, its brash sidekick which I particularly loathe although, of course, it won design awards. Comfort though was a key part of the selling point and David Lawrence, in his, wonderful book, Designed, BR – 1948 – 1997, explains how an ergonomist was hired to ensure the seats were comfortable. Now, I suspect, if the iron board seats on Thameslink 700s or on the Azumas are anything to go by, no ergonomist worthy of the name ever sat in those seats during their design phase.

Which brings me back to the transport committee’s report. While extolling the various benefits of hydrogen and electric traction, there is nothing to be found about the passenger experience. Ever since the postwar spread of the motor car the railways have had to contend with tough competition but have had an inherent advantage in the commuter and intercity markets. Now they are about to face two new enemies – a technology that everyone has learnt to use and a virus that many think lurks in every nook and cranny of the rail system.

Therefore, what the trains of the future need to do is offer a comfortable and enjoyable experience in well-designed carriages that, for example, have pleasant lighting, line up seats with windows and are comfortable enough so that you can doze off without having to call your osteopath as soon as you wake up.

Instead, apart from a section on making trains universally accessible – yes of course they should be – the committee covered thoroughly the arguments about decarbonisation, something else upon which nearly everyone is agreed. As there is a Tory majority on the committee (and it lacks someone with the stroppy instincts of Gwyneth Dunwoody who chaired the committee during most of the New Labour years and never held back from giving her colleagues both barrels), the report is rather mealy mouthed about the problems with hydrogen and battery power.  It does highlight some of the difficulties but does not dare state the bleeding obvious, which is that neither are likely to play a major part in delivering a decarbonised agenda on the railways, not least because both technologies actually have a considerable, albeit indirect,  carbon footprint. Therefore they rather left the government, which is obsessed with pushing these difficult technologies, off the hook

As the report stresses, there is one way to work quickly towards decarbonisation and that is through electrification. Again, to go back to the history of British Railways, there were moves to introduce electrification more widely when the West Coast Main Line was sparked up in the 1960s but this was rejected by dyed in the wool old regional railway managers who did not like the hassle of putting up the wires. Otherwise, we would not be talking about electrification on the main lines as it would have long been done, and instead we are now at the sixth stage of a stop (1960s) start (1990s East Coast) stop (1990s) start (2000s Great Western) (stop 2010s) process that has gone on for more than half a century.

The Committee is unequivocal on this. While recognising that costs are high and that the past record has been patchy, it recommended ‘that the Department commits to a 30-year rolling programme of electrification projects and sets this out in its long-term rail decarbonisation strategy’.  Quite right. And moreover, to revert to the initial theme of this column, it should be done with style. The clunky overhead line equipment that has been fitted onto the Great Western was not only ugly, but expensive, and there are far more pleasant designs available, using arches or more minimal designs. There was a huge row with local environmentalists over the section through the Chilterns but Network Rail proved obdurate despite the existence of alternatives such as those promoted in a competition (https://www.ribacompetitions.com/ols/index.html) by the Royal Institute of British Architects. So we need not only the interior but the exterior of the trains and the railway to look and feel good. That should not be too difficult.

It is great that the rail industry has got together to ensure that women are able to travel on trains free to escape violent partners. Indeed, the Rail Delivery Group confirmed that 1,348 people including 362 children, an average of four per day, used the scheme since it started a year ago.

It took the brilliant intervention of one of SouthEastern’s station managers, Darren O’Brien, to come up with the scheme after he was moved by a Dispatches documentary Safe at Last  about Reigate and Banstead Women’s Aid (National Rail Awards judges please note: this man deserves one!). But well done to the rest of the industry for picking up on it so quickly.

But, and this is the churlish bit, I only know about this because the scheme was about to end until the RDG announced in a press release that it was now being extended. Fortunately, someone with a bit of nous at the RDG or in the industry more widely cottoned onto the fact that such a scheme is a no-brainer, not  only in terms of the vital service it has provided to victims of domestic abuse, but in terms of good PR for the industry. Letting it lapse would have been a terrible own goal. As the RDG’s press release says, ‘free travel can be a lifeline for people fleeing abuse who may not have access to cash’. Technically it is due to lapse again in a year but there is, thankfully, widespread support in the industry to ensure it is made permanent. That should be announced with another bout of publicity in order to publicise the scheme more widely.

The cost is minimal – say £20 for each user would suggest £30,000 in free tickets but as about two thirds of its users said they would not have travelled if the journey had not been paid for, the lost revenue is utterly insignificant, probably less than £10,000, and a fraction of what has been saved by preventing abuse.

So stick up posters everywhere, both to ensure victims know about it and to show that the railway industry has a heart. Getting the Duchess of Cornwall to praise the railways is, simply, priceless. It needs countless more such initiatives at a time like this and so what if they cost a few bob. So if you are a Darren O’Brien with a good idea, let’s hear it!