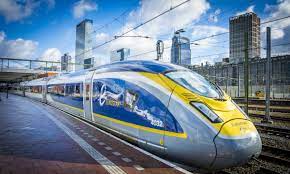 When people suggest to me that it would be best if politics were left out of the railways, I always point out that the two are joined at the hip. You only have to read my books on railway history to realise that throughout the near two century long existence of the railways, there has never been a time when they have been free of political interference.

Nevertheless, even I, as a hardened veteran observer of trying to understand the politics of the railways, am rather shocked at the extent of the game-playing over Eurostar. In a way that was inevitable once the pandemic started. Whereas railways across Europe immediately lost a huge chunk of their patronage, Eurostar has been particularly hard hit, with loadings totalling barely 5 per cent of pre-Covid levels, thanks to the ban on foreign leisure travel and the virtual mothballing of much of the economies on both sides of the Channel. Moreover, Brexit has not exactly helped b killing off a part of the remaining business.

As Eurostar insiders have stressed to me, the organisation is unique with its range of stakeholder and odd ownership structure – it is majority owned by French railways, then 40 per cent by a couple of funds, with the remaining 5 per cent belonging to Belgian railways. Moreover, as an international transport service, now running in four countries, three of whom are in the EU, Eurostar is at the mercy of decisions made by each of these governments as well as their railway companies. Just to add complexity, the British government sold its stake to the two funds for £575m nearly six years ago and therefore ostensibly has no responsibility for bailing out the company. And as a further complication, there is the matter of the Channel tunnel through which all services have to travel and which is owned by Getlilnk, formerly Eurotunnel, whose biggest shareholder is Italian. Currently Eurostar passengers pay £14 each way, but there is no guarantee that this level would be the same if a new operator entered the market.

That’s where the game playing starts. Ministers have tried to let it be known that they consider this is ‘nothing to do with us, guv and for all they care Eurostar could collapse and it would not matter. Someone else would take on the service, perhaps even by taking on the existing trains from the defunct Eurostar or even by operating with a different set. Some Tories on the Right have even welcomed this suggesting that Eurostar is a nasty monopoly and that if it went bust, it could be replaced by a private sector company or even companies, rivalling each other

Frankly, none of this is either feasible or desirable. First, it ignores the fact that actually the Eurostar is of far more benefit to our economy than those of our European counterparts. We are, as it were, at the end of a branchline. Not only is it our best route into many destinations in Europe, especially now that Amsterdam and Rotterdam have been added as direct destinations, but also dropping in on London from Paris or Brussels is far easier by train for American and Asian tourists on the Grand Tour of European capitals, avoiding all the hassle of a short trip by plane.

Secondly, High Speed One, the line between St Pancras and the tunnel, which is also owned by a couple of funds, has at least two sets of guarantees from the British government although the details remain opaque. There first is a minimum use guarantee given which runs until 2035 and has the effect of providing a base of income for HS1 whether Southeastern trains use it or not. In addition there is a further guarantee of a £10 million additional payment to HS1 every six months until 2025 in the event Eurostar ceases to use HS1, which was drawn up to cover the possibility of the tunnel being out of use for a long period. So if Eurostar stops running, the UK government would have to pick up the tab.

Thirdly, the idea that another company would be able to set up a service quickly is unthinkable. One can’t imagine that SNCF would willingly allow the rolling stock to be flogged off to some upstart railway and therefore any newcomer would need to source new trains. As for the old trains, all apart from eight sets have been scrapped or are not in a fit state for immediate use. Even if they were available, the French government would probably put a stop to any deal. As for any new trains, they would have to be compliant with the ridiculous requirements of the Channel Tunnel Safety Authority, which still requires trains in an emergency to be separated into two halves, with all the passengers being evacuated into one of them, in the event of a fire in the tunnel. Good luck to anyone trying to do this in less than a couple of years.

Therefore, the convenient implication that this is a French problem does not reflect reality.  Negotiations have been taking place for months between the various stakeholders, including the British government, over the future of Eurostar. Indeed, the boss of SNCF started earlier this year that the matter had to be resolved by the end of March, to ensure continuity of service. In fact, emergency loans have kept the company going, but losses are still running at £1m per day as there is only one return service to each destination. A bare skeleton service!

Nothing is immutable. For example, the customs and security issues that stopped trains running direct without a security check on the return journey from Amsterdam was resolved last year through a treaty that involved all four countries involved. It took two years, but now means that Rotterdam and Amsterdam will be popular destinations by train, taking people city centre to city centre avoiding the hassles of a ridiculously short flight. The future of Eurostar needs to be sorted out more quickly and the pandemic has shown that things can get done rapidly when there is a pressing need.

At the end of the day, it is a battle of wills and there will have to be compromises with the British government very much involved. Given the extent of the bail-out through billions of soft loans for the airline industry on both sides of the Channel, chucking a few hundred million at Eurostar is good value. Probably the best outcome would be for the British government to put in money that would become equity, diluting the existing holdings – which will not please SNCF or the other owners – and representing probably a rather good investment.  So far the UK government has loudly refused to offer any loans. Creating such ill-will for what is a vital service is not in our best interests. Then, dare I say it, neither was Brexit.

Railcard meanness is not helping people back to rail

And here is another example of the way government affects the railways. Rather naively, when I first used the train after the lockdown eased for a trip to Margate, I assumed my ancient man’s Railcard would still be valid and extended for a few months or even a year for free. I thought this would be self-evident given I had not been allowed by the government, to use it for most of the past year including the four months since mid December when the second total lockdown began. But no, I was told by the very helpful ticket clerk at St Pancras, it was not extended and ‘actually, sir, that is outrageous and you should complain’.

Well I am complaining. There is both an equity issue and a marketing one. In fact, the decision was made in September after the first lockdown and not changed despite the fact that for some people they will never have had a chance of using their cards for a whole year. This is simply theft. The government has told us we are not allowed to use the railways and then has banned the companies from extending the railcards. Surely, when the government intervenes into the market like this, it is up to the state to ensure people do not lose out. This is not a huge sum of money. There are 5.1`million railcard holders, and given some would not renew, it would cost £15m at the most, and probably a lot less.

But it is the marketing point that makes this so short-sighted. People need to be attracted back to the railways, and this obvious rip off will be a deterrent. They will – wrongly – blame the companies when it is the government that has stopped them making a concession that would be a cheap way of helping people back to rail. There could even have been an advertising campaign announcing the concession, a kind of welcome back to rail present.

The Rail Delivery Group and the companies are furious but powerless. This shows the worst aspects of having the railway run by the Department for Transport under the yoke of the Treasury and bodes badly for the period to come. The RDG is constrained from campaigning given where the money is coming from, but we need to hear passenger bodies and others in the industry expose what is basically daylight robbery.