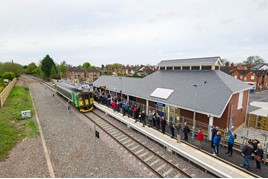 There seems to be a bit of a pattern to my summer writings in my attempt to keep away from the big issues such as Great British Railways and recovery plans that I know will dominate the year ahead. In my last column, I wrote about a town, Louth, which had sadly lost its railway in the Beeching cuts and was therefore failing to attract the number of tourists which its understated charm deserves. This time I am writing about a similar size town, Kenilworth, which regained a connection with the railway with the reopening of a station that had been closed half a century previously and oddly this is in many ways even a sadder story.

Again, I have something of a personal connection as in 1967 I went to Warwick University, which actually is located just two miles from Kenilworth and was only named Warwick (which is nearly ten miles away) because it sounded posher.  In one of those inspired bits of timing by BR, Kenilworth station was closed in the precise year that Warwick University opened which meant that the nearest railway station was Coventry.

When I was at the University, I lived in Leamington, which is where the line from Coventry runs to and there as an excellent bus service between the two, with a stop for Warwick University. Therefore campaigners to reopen the station rather had their work cut out as much of the potential market was firmly in the hands of what, in those days, was Midland Red. Now it is the number 11 provided by National Express and operates a 15 minute frequency with a stop right in the heart of the campus. After all the bus takes 40 minutes from Kenilworth to Coventry station, and the train under ten.

Despite the frequent bus service, there was a lot of enthusiasm to renew the rail connection. Kenilworth is a growing town and it is within easy commuting distance to Coventry and Birmingham. Many students live in the town and a railway connection makes getting to and from their home towns easier. Moreover, as the line was never closed, being goods only for several years but then used by CrossCountry services which rattled through Kenilworth on the single line.

As with so many reopenings, what should be a simple process of building a platform and a shelter took 10 years and a staggering £13m. The original initiative came from CrossCountry and Warwickshire County council, and at one point John Laing Ltd (which at the time had an involvement in the Chiltern Line franchise) obtained a 20 year contract to build the station and operate the station but eventually walked away when planning permission could not be obtained. Warwickshire tried again offering £5m towards the cost and eventually a plan was agreed in 2014 with the Department for Transport chipping in a similar amount. Even then though, there was a series of delays which meant that the original hoped-for opening date was put forward to the end of April 2018.

The original plan was for an hourly service with the hope that this would build up to a greater frequency but as there was only a short platform, the CrossCountry trains could not stop there as they do not have selective door opening. However, right from the start there were difficulties. There were frequent cancellations according to a local campaign group who told me ‘In 2018 and 2019, some 2,786 interruptions to the train service at Kenilworth took place, with 1,069 (38 per cent) due to “lack of train crew”. The majority of these interruptions led to train service cancellations from lunchtime onwards, often meaning that returning passengers were stranded at Coventry or Leamington Spa while bus services were arranged, often taking hours to arrive.’ The train operator, West Midland Trains, accepts there was a problem with driver shortages: ‘The root of all performance issues on the line has been a shortage of available train crew, something we had begun addressing by recruiting additional staff when the pandemic struck’. However, the statistics quoted above suggest a wider management issue with other factors leading to cancellations.

This was pre-pandemic and it got worse when Covid struck, with more cancellations and then total suspension of the service in January. It was restored in April but only with a two hourly service. Therefore any passenger base which built up has effectively been undermined. Moreover, the ticket office service was provided by an independent operator who based his business on a reasonable throughput of people who would also buy other things from the shop. Now he is throwing in the towel as the business is not viable thanks to West Midlands Trains’ failure to provide a reliable service and that will reduce further the likely footfall.

At least West Midlands Trains is not defending its service. They told me: ‘We are fully committed to improving the reliability of the train service at Kenilworth which, for a number of reasons, has simply not been good enough’. The company says that Covid has cost it 25,000 training days but of course there was a driver shortage right from the start. Now the company says they are taking steps to ensure more drivers have the required route knowledge. Whether that is mere words or in fact the company is genuinely keen to ensure a reliable service remains to be seen.

The mistake made by Warwickshire and indeed the Department for Transport  right from the beginning is not to have ensured that the operator provided a set service level. Without that, the local authority has little to bargain with once it has handed over the money

There is a salutary lesson here. Campaigners for reopenings should beware. Not only do they have to think of how to win the initial battle, but they have to ensure that the future is secure. Not easy in the current environment.

I once needed to reach Dunster on the West Somerset Line and used the railway to get me there from Taunton, as did several other members of the cricket team I was playing for. It was by no means cheap but it was better than the slow windy bus along the Minehead road. However, the big downside is that the southern terminus at Bishops Lydeard is four miles from Taunton railway station.

While I love the idea of heritage lines, I always think that the best legacies of the railways are the those that are still providing a service a century or more after they were built: the historic stations, the bridges, the cuttings, the buildings and so on. So I love the idea of heritage lines being operated as a form of public transport, having a  use beyond providing a day out for enthusiasts and holidaying families seeking to do something with their kids

Therefore I was delighted to hear that the all party committee on heritage railways has produced a report which examines the idea of these lines being used for transport purposes. Unfortunately, there are many obstacles. Heritage lines are restricted to 25 mph which gives them exemption from all kinds of safety requirements but that makes them unattractive to provide routine travel. There are a few with derogations which certainly would help make them more attractive to casual users.

Clearly, as the report says, the business models of heritage railways are very different from those of the national railway. In particular, fares tend to be high, costs are kept down by the use of volunteers who may not wish to work in a commercial environment. Timetables would need to be expanded, which may either not be feasible or would cause problems with local residents.

Moreover, many lines could not possibly cope with a big influx of travellers. The report concluded ‘We found no evidence of major hindrances that would prevent heritage railways providing a public service as a matter of principle’ but they stressed that opportunities would be limited.

However, there is some potential. Of the 156 heritage lines, 32 have a good interchange with the national rail network. In addition, 11 serve towns of 10,000 or more that do not have a railway station.

In addition, 19 railways serve major tourist attractions and are linked to the national network with a further two where extensions of the heritage railway are proposed to create that link. This may alleviate some of the problem of people accessing remote tourist sites by car. Moreover, the heritage railways themselves could do more to ensure that people visiting them do so by public transport.

The most positive suggestion to come out of the report is that train operating companies (or whatever we will call them in the Great British Railways future) would foster a local heritage railway, becoming a ‘surrogate support’ for the line. This would help with the provision of through ticketing, promotion and marketing and as an interface between the heritage railway, and other parts of the national rail network. This would overcome many of the barriers to greater use of heritage lines but would require an open mind on both sides.