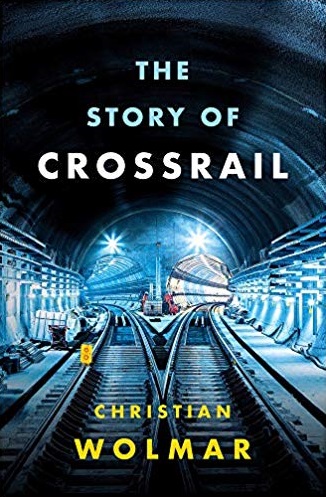 It’s gone quiet on Crossrail recently, and they like it like that. No news is good news because the past three years have not been kind to the project. As I am updating my book on the project to coincide with the opening, I have been on a couple of visits recently and spent a lot of time talking to the project’s managers who are quietly optimistic that their preferred date of February 2022 for the opening is feasible.

But ‘quietly optimistic’ is also the favoured expression of politicians heading into an election knowing that their chances are slight and there is no shortage of pitfalls on the way that might get in the way of the hoped for opening which is part of ‘the first half of 2022 window’ that is now the official mantra for the start of revenue operation.

I met Mark Wild the CEO outside the recently opened Moorgate station of the Elizabeth Line. He arrived at the project as CEO in the autumn of 2018 after the delay to the original opening date of December 9 2018 had been announced but knew the scheme intimately since he had been on the board for several years.

Where I meet him, there is a wide entrance, topped by the familiar blue glass of the London Underground which gives access to all the various train services from Moorgate. But in reality this is Liverpool Street station too, as passengers getting off the Elizabeth line trains that stop here can also directly access the main line station at the Eastern end of the platform.

Yet, when you enter the station, and see the route map of the Circle and Metropolitan lines, Liverpool Street is marked as a separate station. How many unknowing people, one wonders, will take the train from here to Liverpool Street? It is something that worries Mark Wild but there was no easy solution. Renaming the whole station Liverpool Street would, equally, have been confusing to many passengers. Londoners will get used to all these complicated dual stations – Farringdon/ Barbican is another example – but occasional visitors and tourists may well remain utterly bemused.

Liverpool Street is one of the seven central London stations (out of nine, Canary Wharf and Bond Street being the exceptions) already handed over to Transport for London. It was one of the more expensive stations costing £450m enough to build a good chunk of railway up North.

Construction was in fact delayed for a year because of a fault line which absorbed seemingly endless amounts of concrete before, at last, the ground under Finsbury Circus could be stabilised enough but now the station is one of the proud achievements of the Crossrail team. The station is vast, not just because the 240 metre long but empty platforms resemble an attempt to create the world’s longest bowling alley but also because every connecting aisle  and every escalator passageway is built on a completely different scale to what London’s tube passengers are accustomed to. There is room to breathe, room to look up at the wonderful white ceiling glass-fibre reinforced concrete panels with their curved, sweeping corners that suggest almost infinite space and room to admire the various ways in which this railway is so different from any others in the capital. Every passageway is twice the size you would expect, every roof is far higher than it needs to be and every escalator far longer than almost any on the Underground – and every platform is accessible for the disabled, at times by wonderful lifts that run parallel to the escalators.

I could go on, but just make sure you visit as soon as it is open. It is something to make us proud in these dire times. In truth all these passageways did not have to be as spacious. Other design features could probably have been dispensed with. Yes, a few hundred million could have been saved, but at what cost? To tell the world that public transport users are second class citizens who don’t deserve comfort and a pleasing environment.

After talking to Wild and several of his colleagues, there is a strong wariness to commit to the February date, but I would guess there is probably a 50 per cent of it happening. While the stations are almost all handed over, the problem, as ever, is systems integration and the software needed not just for the trains but for everything. This is, as the managers kept on repeating, Britain’s first digital railway and it was undoubtedly mostly software issues that have led to the three year delay. My book – and future articles here – will cover my analysis of what happened but at the moment, suffice to say that the sheer complexity of the task of blending in the various software systems governing every aspect of the railway, from the tunnel ventilation system to the CCTV cameras was heroically underestimated.

To give just one example of the issues,  we meet Kim Kapur who goes by the title of head of station integration and she has a staff of 85. Merging and connecting bits of railway that can be up to 150 years old with the most up to date systems in the world is obviously a complex task. It has been made more difficult by the fact that the Elizabeth line is not part of the London Underground but is run by Transport for London through its subsidiary, Rail for London. That means there are some bits of the Elizabeth Line where LU workers are not allowed to go and vice versa. For example, the Moorgate/Liverpool Street Elizabeth line station is run as part of Rail for London from a control centre in the new part of Moorgate station. This includes the countless passages between the various lines but not the main section of Liverpool Street which remains under the control of London Underground.

Kapur explains: ‘When the communications system was set up, the internal communication for the new control centre at Moorgate was on a different channel to the one at Liverpool Street. Therefore, if an emergency occurred on the Liverpool Street side, the 150 staff at Moorgate would have to adjust their radios to be on the Liverpool Street channel.’ To avoid this becoming a major issue during an emergency, the software is now having to be changed. That is the type of integration issue which was ignored by the team working towards the Dec 9 deadline. There are numerous others, sometimes rather unexpected  such as the interaction between the tunnel vent systems and the platform doors.

In a subsequent visit to Whitechapel I notice a typical glitch. The 12 trains per hour trial running schedule is running successfully but I notice on both platforms, the trains – which are run automatically through the tunnel – all stopped a foot or two beyond their correct alignment with the platform doors. It was not entirely consistent, as some were more out than others, but none were in the right place. I asked various Crossrail managers about this, and they told me it would be sorted as part of a big two week long software drop in mid October called ELR 100 which is the latest version of the main signalling and train software. There is to be a second one, ELR 110 in December.  This software is being extensively tested but it is only once it is in operation that the system can be validated. The success of these two ‘drops’ will determine whether date of February 2022 can be met.

And as the potential opening date nears, there is the rather bigger question – which inevitably hangs over HS2, too – of whether passenger levels will ever reach the previously expected levels. As I arrived for my visit of the Liverpool  Street/Moorgate station for a 9 am meeting, I was struck at the emptiness of the City streets and, particular, its pavements. Footfall was probably around 15-20 per cent of pre Covid levels and those numbers are not going to come back quickly, and some will never return. I note that in the first edition of my book, I wrote ‘Estimates for the use of Crossrail suggest more than 250 million people will use the trains in 2020/21 and this will be an important form of new revenue for TfL’. Ah well, Mystic Wolmar has always been useless but has never quite got it wrong on that scale.

That said, and I have to reiterate this every time I write about the project, this is a world class railway, the likes of which Londoners and, indeed, pretty much anyone across the globe will not have seen. An upgraded version of the Bakerloo Line – which is what the daft moniker of Elizabeth Line imposed by Boris Johnson infers – this is not. Every time I have visited the project – and I have been to all the central London stations except the problematic Bond Street – I am blown out by the scale of the vision and the architectural merit of every station. This is a luxury railway, a 21st century railway that will surely still be admired in the 22nd and one which will attract users who would have been put off by enduring the same cramped conditions of the old Tube lines. But probably not 250 million per year for a long time.

Travelling for a TV programme to York (oddly Posh Pawnbrokers), the production company’s travel agency supplied the ticket. Although I had specified I was travelling down on the midday Inverness train which is non-stop, the company bought an open return ticket which cost a staggering – wait for it – £273. And that was for standard class. There was, of course, no recognition of my old man’s card. This was actually more than the fee I was receiving over which I had to haggle with the producer.

This is ludicrous in every respect. The travel agency, which is presumably on a percentage, is quite happy to furnish an overpriced ticket and the production company presumably simply passes these costs directly on to Channel 4. So in a way no real person loses but it all leaves a bad taste in one’s mouth. In one sense, the train company – or rather, now, the taxpayer – benefits except that these premium are a deterrent for unknowing travellers and frankly a pure rip off. Moreover, they will make any savvy business think twice before sending anyone by train. I could easily have hired a car for that amount and indeed the next day I had to buy a plane ticket from Belfast to London and it cost precisely one tenth of the York fare, just £27.

So those working on setting up Great British Railways, think about a more equitable fares system that does not punish those who don’t know the ropes or can’t be bothered. It all gives the railways a bad name.