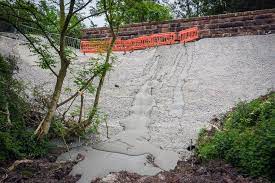 Over the years, as a journalist, I have occasionally come across stories that simply do not make sense. Brexit is certainly in that category, as is the billions wasted on vain attempts to create ‘driverless cars’ or the black hole of ‘test and trace’ and now I can add the smaller but significant tale of the old railway bridges that the Highways Agency is intent on destroying for no particular good reason and at great cost.

The picture  of the Great Musgrave bridge ‘infilled’ in the past few weeks by the Highways Agency is an all too vivid illustration of what can go wrong when government, and its allies in the private sector, embark on a clearly misguided course of action without sufficient oversight by any politicians or officials able to look at the bigger and wider picture. [Added note: It is, incidentally, a picture that after publication of this article proved vital in beginning to shift policy on this issue as the media belatedly started picking up on this story].

This piece of official vandalism is set to be repeated across the country unless campaigners are able to prevent it. The story starts with the decision nearly a decade ago for the Highways Agency to take on the 3,122 redundant structures belonging to the old British Railways Board, which was being wound up. This in itself was rather strange since the Highways Agency is responsible for the trunk network and motorways, but most of these structures are on minor roads tucked away deep into the countryside away from major roads. For several years, a small sum, around £10m, was spent annually on these structures but then suddenly, rather surprisingly a far larger sum £254m became available, over the next few years. The core idea was that the number of structures would gradually be reduced, either by demolition or infilling, with initially a target of 10-15 per cent representing up to nearly 500 that would then require no further maintenance. The money available is rising to £41m annually though initially there is only – thankfully – £13m available for 2021/22

One can detect the hand, here, of desk bound bean counters who hate the notion of unquantifiable future liabilities and therefore were all too happy to embark on a programme of reduction without any understanding of the impact, be it on the environment or on the potential use of the structures themselves and the paths on which they sit.

A campaign group, oddly named the HRE Group, has been collecting evidence about the impacts of this programme. Initially, there were 115 structures in the programme but this has been reduced to 69. The Group comments that ‘if there was so much urgency to undertake this work, how come more than a third of them have now been deemed safe’?  According to Highways England, the anwer is that ‘infilling or demolition is only considered on structures that are unsafe’.

However, the rush to infill Great Musgrave appears to contradict this. There was no imminent danger. The bridge was capable of carrying 17 tonne vehicles and there were already other local road restrictions of 18 tonnes. Moreover, simple repointing at a cost of a few thousand pounds could have brought the bridge up to a 40 tonne standard. Instead, £124,000 has been spent on creating this terrible concrete mess that looks like a motorway embankment.  Worse, there are heritage rail lines at either end which had ambitions to reconnect at some stage and even if this was fanciful, a lovely country path has been wrecked for no good reason. It can apparently be reversed but at major cost. My request to Highways England for a comment on the decision received no answer by the time Rail went to press.

This story has highlighted a gap in that there is no organisation to bat for railway heritage when it is at risk. The Heritage Railway Trust which receives around £2.5m from Network Rail does a good job in spending money on schemes to improve buildings and routes, but its remit is not to campaign. The Heritage Railway Association represents preserved lines but also has no role in this type of issue.

There are concerns among some railway heritage supporters that this story is being exaggerated and that the Highways Agency is doing a good job. Indeed, the Agency gives £200,000 annually to the Heritage Railway Trust to improve old railway structures . One source told me: ‘These concerns are overblown as the infilling could be reversed if necessary and this programme overall saves the Highways Agency from having to continuously maintain these structures and enables them to be preserved’. This hardly seems the case with the Musgrave eyesore. If that is what Highways Agency is planning for all these sites, then it must be stopped.

Indeed, one of the most egregious aspects of this story is that the Highways Agency is able to by-pass local authorities by using its ‘permitted development’ powers that allow it to carry out work without seeking permission from local councils. If the Agency’s intentions were all supportive of the wider political agenda of encouraging green routes, rail reopenings and heritage lines, then surely it would be prepared to subject itself to the scrutiny of its plans at a local level. By using permitted development powers, it removes itself from the need to explain its policies and its reasoning behind decisions to infill or demolish.  Huw Merriman MP, the chair of the Commons Transport  Committee put it well, when after hearing evidence about the policy, he wrote to the Agency sayingrequesitng requested information on what steps are being taken to transfer parts of the estate to local authorities and third parties, including community groups, and suggested that the future of the structures should be determined by ‘an open, transparent and democratic process’. That hardly seems like an onerous demand to stop monstrous desecration of the countryside as happened at Great Musgrave.

There are so many questions about this – why the rush? Why has the money suddenly been made available? Why are local authorities not being consulted? Above all, why bother? There is no sign that bridges are collapsing around the country and God knows there are countless other priorities for spending money.

The inflexibility of Her Majesty’s Treasury

The big announcement about flexible tickets proved to be the wettest of all damp squibs as predicted by my esteemed colleague Barry Doe. The offer is not only very limited and will help only a few people with particular circumstances, but is also not very flexible and crucially is less generous than some of the previous carnet offerings by the likes of C2C and other companies. By insisting on the withdrawal of these older schemes, the government has ensured that some people will be worse off than before.

I use the word ‘government’ here deliberately because it is very clear that it is the failure of imagination of the Treasury that is responsible for the highly restricted nature of this scheme. The Treasury never seems to understand business – far less than an old leftie like me who actually likes the right sort of entrepreunerial capitalism – and looks at commercial decisions in the most narrow ways. Those Whitehall big brains fail to understand the very essence of business which requires, in particular, pricing your product to attract as much income as possible. Instead, they see any reduction in ticket prices as costing money, failing to understand the very concept of elasticity – the economic term for the relationship between price and demand. I have mentioned this before (Rail 920) but it really seems that the Treasury consider the railways to be so inelastic that reducing fares will not attract more users and indeed that explains why they insist on annual increases above inflation because they think it will not deter people from hopping on a train. They live in a different world to us normal folks.

This is not just bad news in terms of the scheme but a bad omen for the future and so let’s spell it out in CAPS: UNLESS GREAT BRITISH RAILWAYS HAS COMMERCIAL FREEDOM TO MAKE DECISIONS ON BOTH FARES AND INVESTMENT, IT WILL BE THE WORST OF ALL WORLDS. There is no point having the private sector involved if it cannot act commercially and having the industry run from Whitehall will merely ensure that little good comes from the proposed reforms. The Treasury and the Department for Transport have to ensure GBR can act independently, but somehow  given the shenanigans over the whole Williams Shapps process, I doubt they will.