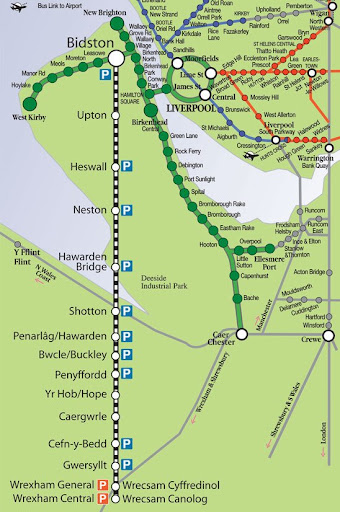 ‘Levelling up’ is the big idea following on from other memorable catch phrases like ‘hug a hoodie’ and the Big Society. If it is not to be consigned to the same rubbish bin of history, then over the next couple of years the Tories will have to show serious intent and even some results.

The wobbling over the eastern leg of HS2 – my bet is a postponement but not cancellation – there is even more pressure for tangible evidence that the Tories care about the North and a willingness to invest in the railways would be viewed positively in the region. To test the likelihood of this, I spent a couple of days earlier this month in the North West and Wales looking at a group of schemes which have collectively become known as Growth Track 360.

This rather unspecific and vague title encapsulates the problem.  Essentially, the disparate members of this group are trying to bring about a series of improvements in a very neglected part of the railway network that broadly takes in an area south west of Merseyside, North Wales, and Cheshire. The group includes representatives belonging to a real alphabet soup of organisations across both the public and private sectors such as Cheshire West & Chester, Warrington Local Enterprise Partnership, North Wales Economic Ambition, two routes of Network Rail, Transport for Wales and several more. I could go on but you get the picture. The difficulty of choosing a name that reflects the vagaries of the area and the variety of schemes they are promoting explains the anonymity of the name.

Grabbing the attention of ministers in this kind of area split between two countries, numerous local authorities and train companies as different as Avanti and Merseyrail is equally an uphill task. But that does not mean that the projects are any less important than those in more easily defined areas and with more prominent promoters. Yes, they will have a lower benefit cost ratio because there are fewer people in the area, but that precisely demonstrates the need for ‘levelling up’. These areas have been neglected for far too long as a result of a cost benefit analysis methodology which fails to recognise the wider implications of investment decisions.

The group, created in 2016, has been working on a series of rail schemes to improve connectivity in the area which currently is very car-dominated, and where traffic jams are rife. The most crucial is a scheme to expand capacity at Chester station which is currently limited by the presence of three bay platforms and a botched simplification programme dating from the Beeching era. This is the gateway to a range of improvements affecting the area west and north of Chester but rebuilding it is not a simple task as it would involve replacing a road bridge and resignalling, putting the current estimate at £60m. A fraction of Crossrail, as one of its members put it to me.

Steven Jones, who is the coordinator of the Growth Track 360 and works for Welsh Local Government has been trying to ensure the Chester station rebuild is included in the Rail Network Enhancement Pipeline, the long awaited list of projects that will be given priority by Network Rail. The main obstacle according to Jones, is the opaque and slow nature of the byzantine process. Jones did meet the Rail Minister, Chris Heaton Harris, but has had difficulty having setting up meetings with any of his officials and he has found it difficult to identify the precise decision-making process

Jones needs £1m or so to be able to create a comprehensive business case, and it is this type of development money which is very difficult to obtain for anyone other than Network Rail.Moreover, he is worried that it will be wasted: ‘The problem is that we might do a business case and then Network Rail will just do it all over again, and then the Department will repeat the exercise. It is seven stages of hell.’

The second big aspiration is a much more frequent service on the Wrexham – Bidston line. This is one of the UK’s forgotten branch lines, kept open at the time of Beeching largely thanks to freight carryings – both steel and cement – but greatly underused. It is a double tracked line that terminates ‘in the middle of nowhere’ as one project member put it, on the Birkenhead side of the Wirral and currently operates an hourly service. At the moment, it takes an hour to cover the 27 miles because there are so many stops at very little used stations. The service is due to be increased to half hourly with the aspiration of eventually having a 15 minute service.  The long term plan would be for the service to be operated by Merseyrail electric trains using battery technology. Originally there were hopes the line would be electrified but with the Office of Road and Rail’s ban on new third rail lines and indeed its cost, the solution is now reckoned to be installing batteries in the new 777 class trains being introduced by Merseyrail. A test train has been working well but only has a range of 20 miles for each charge, and therefore  would need a bit of clever extra technology, such as a rapid charging point at a mid-point station. Undoubtedly, this would transform a rather neglected branch line, serving a lot of big industrial sites, into a very useful railway but getting all the various stakeholders aligned will not be easy. This is by no means a cheap option, with the battery packs and the associated works costing an additional £2m on a £6m train, but it is definitely more cost effective than electrification.  Moreover, battery technology will develop over the years, reducing its cost and improving its efficiency.

In the meantime, as a test of the concept, Growth Track 360 has put in a bid to the new Levelling Up fund with three projects in mind.   A Deeside Parkway station which would serve the the Deeside Industrial Park with a large 250-space car park and bus interchange facilities; new freight sidings at the Padeswood Hanson Cement works connection to eliminate the disruption to passenger services currently caused by freight trains occupying the mainline for 60 minutes whilst shunting; and
a Penyffordd Park & Ride station as a local transport hub. These are small beer, perhaps, but are the sorts of detail that improve the railway and attract new customers.

The group hopes that there will be an announcement in this autumn’s budget but as ever with such schemes there is uncertainty over the timing and no one is holding their breath.

As this overview suggests,  Growth Track 360 – which will welcome ideas for a new name –  has much going for it. At the mostly virtual meeting I attended, I was impressed that when I asked what the key initial project should be, the answer from the leader of Flintshire council, Ian Roberts, was the improvements to Chester station and not his local Wrexham – Bidston scheme. That showed a unity of purpose which is necessary for any group trying to push for such projects.

This is a heavily congested area with a lot of jobs in manufacturing who often cannot be accessed by people through lack of transport. There is huge potential on the local rail network but its complexity and the large number of stakeholders has mitigated against it. Politically, with several local Red Wall seats in the hands of the Tories, the promise of levelling up and the involvement of devolved authorities both on Merseyside and in Wales, it has a lot going for it. The fug of bureaucracy, the lack of an obvious champion and the reluctance of the Department for Transport to commit anything because of its subservience to the Treasury all make life difficult for the group. They need to shout loud, join together on key demands and not take no for an answer.

What future for the Roscos?

While on Merseyside, I was taken round the depot for the new 777 trains being built by Stadler and found myself very impressed. These are fabulous new trains, designed with the help of input from passengers, notably cyclists with the result that the mechanism to hold bikes in place is far superior to anything else I have seen on UK trains – Hitachi’s effort on its new trains is at the other end of that scale, as I have mentioned already several times

Merseyrail has bought these trains itself, with money from its reserves boosted by finance from the European Investment Bank and the Public Works Loan Board. It was interesting how fervent the team was about not having the involvement of a rolling stock company which they reckoned saved around a third of the cost and allowed them to design a bespoke train suited for local needs.

Of course, the particular circumstances of Merseyrail made this much easier. Effectively, this is a management contract rather than a franchise, as Merseyrail was able to guarantee the long term use of the trains. They are not going anywhere else in the next 30 or so years, and nor could they given they are very much a specific design.

But this does beg a question about the future of the rolling stock companies. Given the huge purchasing power of Great British Railways, and its long term strategic approach, it will be very tempted to by-pass the Roscos but that will very much depend on the attitude of the government and, in particular, whether GBR will have recourse to sufficient funds.  The purpose of Roscos was to guarantee the long term future of trains under a short term franchise system. This will no longer apply.

I suspect some hard behind the scenes negotiations which may start with the future of the trains which will become spare when the inevitable timetable cuts come through in the next few months. The Roscos will be unwise to play hardball over that issue if they want a long term future in the industry.